The New Kosovo Power Plant: An Unnecessary Burden at an Unreasonable Cost (Update)

Today we’re revisiting a report we issued several weeks ago questioning the economic viability of a proposed new coal-fired electricity plant in Kosovo.

The project stands to damage the economy of the country but the World Bank, the U.S. State Department, USAID and the Treasury Department support the “New Kosovo Power Plant,” or NKPP, nonetheless. Their support contradicts U.S. policy on climate change, World Bank policies on coal-fired power plants and the World Bank’s commitment to assist poor people (“An Unnecessary Burden at an Unreasonable Expense”). Under current policy and market conditions the “New Kosovo Power Plant” would never be built in the U.S.

We showed in January how the project would overburden Kosovo with debt and crowd out investments in renewable energy, which is where global markets are moving.

That’s still the case, and our conclusions remain the same, but we’ve learned more about NKPP and the World Bank since then.

First, that the World Bank has significantly overestimated  [1]electricity demand in Kosovo over the past five years, a discovery that erodes arguments for building NKPP. The logic for NKPP in the first place is that demand for electricity justifies the project’s construction, according to the Kosovo government. However, the government evidently bases its electricity-demand assertion on a flawed “2011 Options Study” prepared by the World Bank. That document purported to forecast electricity demand in Kosovo and to foretell how electricity would be produced through 2025 (coal, hydro, wind, or solar).

Table I: Actual Generation in Kosovo Versus World Bank Energy Assumptions in GWh (2004-2025)[3] 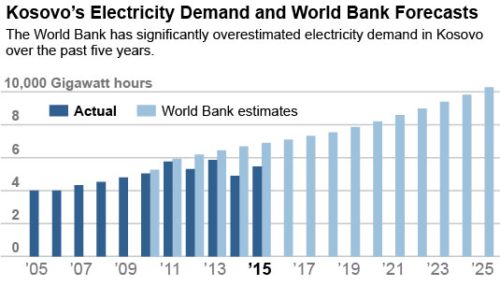 HERE’S WHAT ELSE WE’VE FIGURED OUT: THAT GOVERNMENT COMMITMENTS IN 2013 TO RENEWABLE-ENERGY DEVELOPMENT AND ENERGY-EFFICIENCY GAINS RENDER NKPP REDUNDANT.

The government set targets for 9 percent gains in energy efficiency by 2018 and 25 percent expansion in renewable energy by 2020.[4] The government’s targets were set against the generation forecast supplied by the World Bank, which we now know to be overstated.

OUR CONCLUSION IS THAT If the Government Meets its Targets for Renewable Energy and Energy Efficiency, The EXISTING Kosovo B POWER PlANT Alone Can Generate the Balance of Baseload DEMAND.

According to KEK (Kosovo Energy Co.) Kosovo B produced 3,567 GWh of net generation and 3,922 GWh of gross generation in 2015, amounting to a 68 percent net capacity factor for the plant. This amount of electricity would cover 99 percent of the base-load needs of the country’s electric system if the government meets its renewable and energy-efficiency commitments. Improvement in the plant’s capacity factor could add even more electricity to the system.

If the new plant is built, and if Kosovo B remains online, Kosovo will have the ability to generate 7,627 GWh of coal-fired electricity, even though it will not need this much electricity until 17 years from now—and that’s assuming demand increases at a rate of 2 percent per year (worth noting here is that electricity demand in Kosovo has been flat or slightly negative over the past five years). Combined with the government’s renewable-energy commitments, Kosovo would see generation of 9,500 GWh per year, far in excess of its need.

As detailed in our January report, the plant would be an enormous step back for Kosovo, bringing with it significant debt and equity costs that would mean it would have to run all the time just to generate enough cash to pay off its long-term debt and satisfy private investors. On top of all that, it would be more expensive to ratepayers than other, more viable alternatives.

Kosovo does not need the New Kosovo Power Plant.

Data Bite: Coal Dependency in Kosovo Is More Extreme Than in the World’s Biggest Coal-Burning Countries

IEEFA Report: Energy Poverty Then and Now: How Coal Proponents Have It Wrong

[1] We refer here to the World Bank’s paper issued in December 2011 http://siteresources.worldbank.org/INTENERGY2/Resources/Kosovo_generation_options_report_12312011.pdf. This paper is the most recent, publicly available research from either the World Bank or the government of Kosovo. The generation forecast we use from the report is Appendix E: Generation Forecast by Plant, p. 75.

[2] Email communication from KOSID, the Kosovo Civil Society Consortium for Sustainable Development, to IEEFA, (dated April 15, 2016) based on information received from KEK, disclose that the total net generation from Kosovo A and B for 2015 was 5361 GWh. The data did not include hydroelectric. IEEFA assumed 98 GWh of hydroelectric generation, which represents the five-year average from 2009-2014.

[5] Table I shows actual generation has been flat, declining slightly since 2010. During the period 2010-2014 the annual GDP growth rate in Kosovo was approximately 3%.