Electric vehicles and batteries can drive growth of residential solar

In Britain, all support for solar power ended as of end-March 2019. That support has not been replaced, which means that, at present, new projects will earn zero income from electricity generation and grid exports.

By allowing use of solar generation after sunset, batteries can increase the solar self-consumption rate up to 100%, depending on the relative size of the battery and rooftop solar system.

Looking at small-scale battery storage, German consumer data company Finanztip estimates that some 120,000 households and commercial enterprises had installed batteries alongside PV systems, as of February 2019.

This report assesses the prospects for residential solar, batteries and electric vehicles (EVs) in Britain and Germany. These technologies are expected to be at the centre of global energy system disruption in the future, because of declining costs and their close fit with a global energy system increasingly transitioning towards decarbonisation, decentralisation, digitalisation and democratisation. Strong mutual benefits make these technologies even more disruptive together than in isolation. The potential contribution of battery storage towards the electrification of mobility and heating further increases its relevance and impact.

Our focus is on Britain and Germany, as two of the top four solar and EV markets in Europe. As time goes on, we expect to see even bigger opportunities in southern European and emerging economies. Like many European countries, both Britain and Germany are now reducing support for solar power, potentially slowing the transition to renewables. Britain ended all residential solar subsidies as of March 31, 2019 and support is steadily falling in Germany, and could be phased out under present guidelines, in the second half of 2020.

This report looks at opportunities for near-term growth in the residential solar, battery storage and EV markets. We show that batteries and EVs can boost the economics of rooftop solar, by enabling households to use more of the solar power they produce, thereby increasing savings on their electricity bills. These savings rise over time, as the cost of rooftop solar, batteries and EVs falls. In addition, we review how regulators can reform grid services markets, to put these technologies on a level playing field with conventional generation, which further boosts income. While not a focus of this report, we note that smarter domestic tariffs that reward consumers for using off-peak power can further drive demand, as will smarter EV chargers that contribute towards grid stability.

Our analytical approach was to estimate how many years of electricity bill, road fuel and other savings it would take for households to recoup their initial investment on various combinations of solar, batteries and EVs. Such payback periods are a useful measure familiar to households making these investment decisions. The models were developed using actual cost data as provided by a range of solar, battery and EV providers in Britain and Germany. Various cost reduction assumptions were made to calculate the payback periods for new projects through 2030. 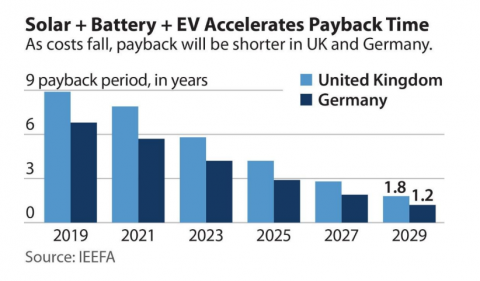 We investigated four themes: the drivers behind adoption of residential solar in Britain and Germany, the extent to which batteries and EVs can add value, the potential for grid services markets to boost adoption, and the impact on adoption of continued cost reductions over the next decade. We summarise our main findings, for various combinations of market standard systems for residential solar (4kW), battery (8kWh, 5kW) and a small EV (35kWh).

Smart devices almost halve solar payback periods in Britain, to 10 years. Such devices, produced by the likes of Smappee and Tiko, can intelligently operate large controllable loads, such as electric heat pumps (where available), to coincide with daytime solar generation. In this way, they increase energy bill savings. They also cut solar payback periods in Germany.

Adding an EV and/or battery system reduces solar payback periods in Britain. EVs in Britain generate net annual savings of around £700 compared with an equivalent conventional vehicle, paying off the upfront price premium in less than six years and generating a positive ROI of 4%. In Germany, EVs have a longer payback period because of higher power prices and lower road tax savings. By providing a new outlet for residential solar generation, EVs increase self-consumption and enhance bill savings. A combined solar-battery-EV system in Britain today has a payback period of nine years and an ROI of 0.9%; in Germany it is seven years with an ROI of 6.4%.

Solar-battery-EV systems presently compete on an unlevel playing field in grid services markets. These markets offer incentives for electricity generation and storage that can help balance network demand and supply in real time. At present, they unfairly benefit large, conventional power plants, for example through codes which make it costly to certify small energy assets. In Britain, some battery providers, such as Moixa and Powervault, give households a small income annually in return for permission to access their batteries for the sale of aggregated grid management services. We assume this income is presently £25/kW battery power/year. Doubling it reduces the solar plus battery payback period to 12 years, from 14 years. In this report, we assume zero grid-services income for management of EV batteries. In reality, EVs are likely to become an important or even critical source of grid stability over the next decade, as a massive, and largely idle, grid-connected energy source.

Combined solar-battery-EV systems could quickly become an obvious choice for households with available roof-space and EV home-charging if our cost reduction assumptions bear out. By 2025, in Britain, a solar-batteryEV system will have a four-year payback period, falling to one year in 2030. Similarly, in Germany, the same combined system has a three-year payback in 2025, falling to below one year in 2030. In Britain, we conservatively assume no policy change to the export tariff, keeping residential solar power unrewarded through 2030. Systems would become even more attractive under seemingly nobrainer regulatory reform that allows households to sell their solar power at wholesale power market prices, and by doubling today’s grid services income.

Press release: A loss of excise tax revenue should not stall the uptake of electric vehicles in Australia