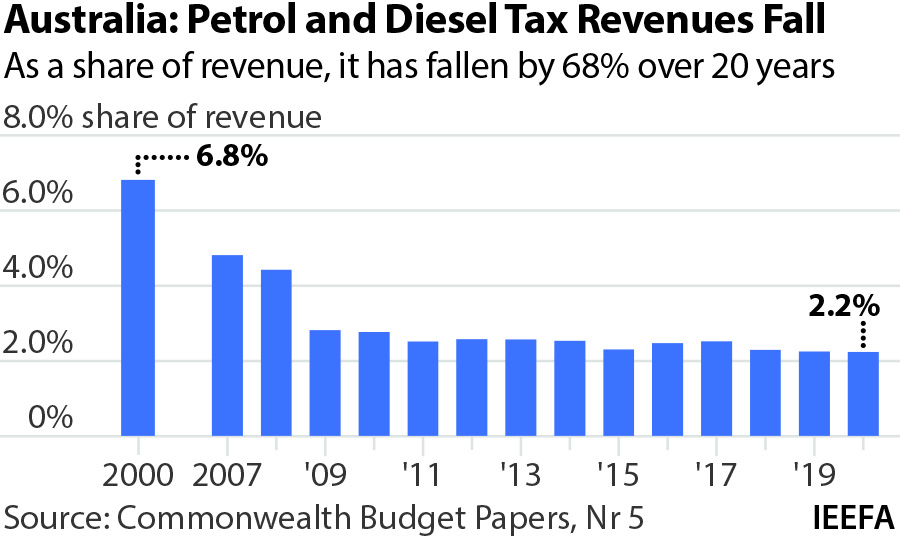 8 June 2021 (IEEFA Australia): A new tax on EV users is unnecessary as the Australian (Commonwealth) government is well placed to deal with the potential revenue impact of the inevitable move to electric vehicles, finds a new briefing note by the Institute for Energy Economics and Financial Analysis (IEEFA).

Fuel excise taxes have been dropping for years with little impact

Global automotive manufacturers have committed almost universally to transition entirely from internal combustion engines (ICE) to electric vehicles (EVs) over the coming 1-2 decades, which means Australia must accelerate the changes necessary to ensure a smooth transition or risk being left behind.

IEEFA guest contributor Owen Evans says despite this, obstacles to EVs are being put in the way due to concerns about the potential loss of fuel excise taxes without recognition they have been dropping for years with little impact. 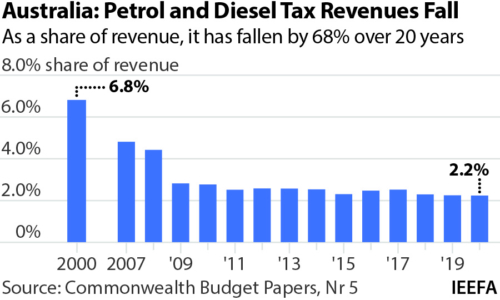 “Fuel excise as a revenue generator is solely a Federal issue and it is becoming increasingly unimportant to the Federal budget,” says Evans.

“Net rebates for off-road users, Australia’s petrol and diesel excise taxes have been falling in real terms since the late 1980’s, down nearly 70%. They are now just 2.2% of revenue, and that 2.2% is moreover spent on general government activities.

“As the Australian government does not use excise taxes to fund road spending, concerns about the erosion of excise tax revenues with the impending EV uptake are entirely misrepresented.”

“Any concerns over the loss of revenue from federal government petroleum excise taxes and therefore the ability to fund road spending are misconstrued and misleading.

“Despite the odd road grant, the States get no direct untied revenue from fuel excise, which begs the question as to why New South Wales and Victoria are mooting new taxes on EV road users.

“The States are suggesting a new tax when there is no threat of a loss of revenue to them. Potential EV road users are likely to be penalised for no reason. The states are in the process of designing another three gauge rail system.”

Evans says instead, the States should look at the positives from the inevitable accelerated EV uptake in Australia.

“Australia’s economy should look forward to the huge ongoing stimulus of replacing $14bn pa of imported high emissions fuels with zero emissions domestic alternatives. That builds new investment and employment, and improves our balance of trade.

“Vehicle producers globally are moving to EVs in part due to genuine demand but primarily due to regulatory requirements. If regulators in Beijing, Brussels and DC mandate EVs, then everyone who sells into these markets will sell EVs. No one will retain a small right hand drive plant to sell EVs to Australia, New Zealand or Fiji.

“The States will get guaranteed revenue via GST from every EV sold, including the GST on electricity used to power EV’s.

“The switch to EV’s could be an enormous boom to the states, however, the present purchase price and consumption tax structures for cars are Federal and will have to be realigned.

“Recent statements by Treasurers in NSW and Victoria that their States are considering their own tax and subsidy structures on this issue should concern all thinking citizens.”

Evans suggests any revenue lost from Australian government coffers could be replenished with a few simple measures.

“Over the past 35 years, Commonwealth government revenue has grown at 8.9% per annum. The government is extremely good at finding things to tax. It is almost certain the government could slowly replace the 2.2% of revenue generated by retail fuel taxes as EV uptake accelerates.”

Evans says the Australian government should move aggressively to create incentive structures for the mining industry where we are a consumer of sufficient scale, to accelerate the conversion from diesel to electric powered off-road vehicles.

“Further, proportionally reducing the fuel rebate, which is only for off-road vehicles, from 100% to zero over a 15-year period while capping each individual group’s rebate to a maximum of $5 million annually, thus ensuring no small or medium sized enterprises are impacted, would bring incremental tax revenues from net excise of some $1 billion pa.

The electricity grid needs to be sorted out quickly

“Even in the mining industry, this would be a material incentive to implement change, consistent with their own net zero emissions pledges. And our mining industry is a globally significant consumer of trucks and earthmoving equipment. We can have a real impact on this part of the world market.

“Finally, the electricity grid needs to be sorted out quickly.”

Evans notes in 10 years, renewables could already be 55-65% of the market but still without the transmission and distribution capacity necessary to support even a modest EV uptake.

“The Australian government could build a tax on retail power to upgrade the network. A 10-year, 0.1c/kWh tax on retail electricity dedicated to the grid would create a $6-7 billion fund to upgrade infrastructure and would likely cost $60 per household a year. This would enable Australia to be ready for conversion when manufacturers suddenly cut-off sales of petrol powered vehicles. This would maximise the value of Australia’s world leading rooftop solar and behind-the-meter battery investments, driving decarbonisation while delivering household savings on energy bills at many multiples of the proposed 0.1c/kWh tax.

“The government should redirect their energies to modernizing the grid and incentivizing industry for the inevitable onslaught of EVs, not muddying the waters with new taxes.” 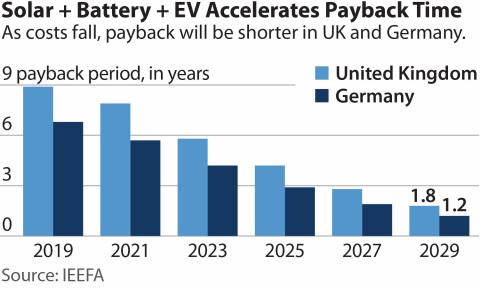