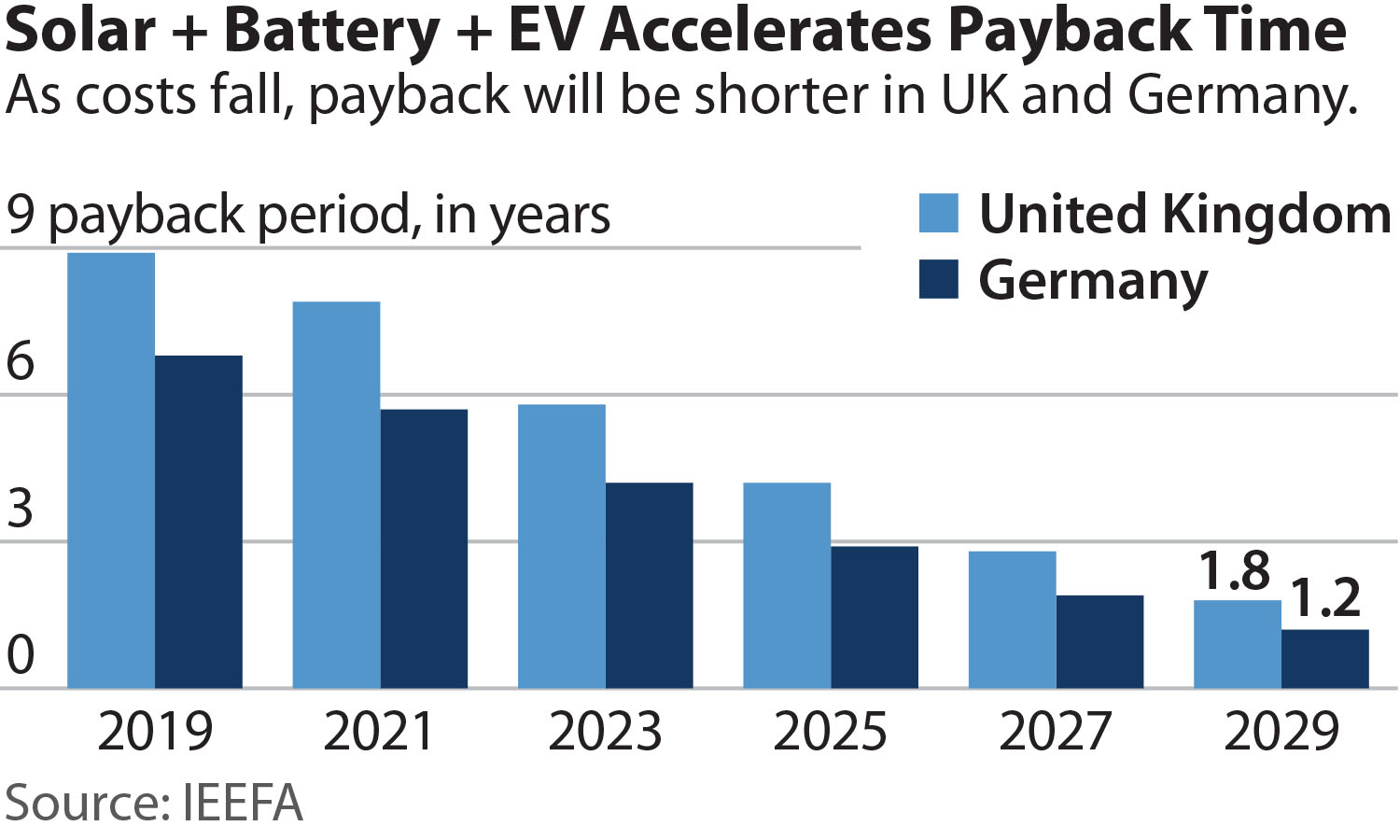 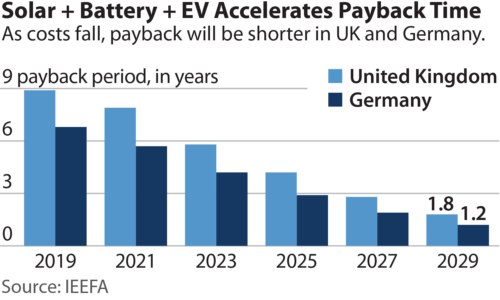 (LONDON) – The falling costs of batteries and electric vehicles can help drive the next phase of growth in renewables including rooftop solar power, provided small-scale renewables and storage have the same access to electricity and grid services markets as conventional power plants, according to a report released today by the Institute for Energy Economics and Financial Analysis (IEEFA).

The report, Electric Vehicles and Batteries Can Drive Growth of Residential Solar, analysed the economic impact of combining rooftop solar with batteries and EVs, and the effects of different policy incentives and disincentives in Britain and Germany.

“Generous renewable energy subsidies have had their day, but scrapping these entirely and replacing them with nothing will damage renewables markets,” said Gerard Wynn, IEEFA energy analyst and co-author of the report. “The falling cost of battery storage and EVs can drive new growth in renewables in Europe, but only if these low-carbon technologies have the same access to electricity network markets as fossil-fuel based ones.”

BRITAIN RECENTLY SCRAPPED ALL SOLAR TARIFFS AND INCOME, MEANING THAT HOUSEHOLDS WITH NEW ROOFTOP SOLAR INSTALLATIONS WILL HAVE TO GIVE AWAY THEIR ELECTRICITY FOR FREE, unless they arrange private deals with electricity suppliers. In addition, Britain is poised to eliminate the reduced value-added tax (VAT) on solar. And in both Germany and Britain, grid services markets that are used to maintain grid stability and balance favour large fossil fuel power plants over small-scale renewables and battery storage.

Solar power, battery storage and EV will be at the centre of global energy system disruption in the future, because of declining costs and alignment with current trends towards “decarbonisation, decentralisation, digitalisation and democratisation,” according to the report. But policy barriers and uncertainty will slow down this transition, and make it more costly.

“EVs create a new source of demand for solar power,” said Christian Kunze, co-author of the report and senior energy researcher at Smart Innovation Norway, a renewable energy think tank. “Battery storage gives households further control over how they use their solar generation.”

Both countries should continue to support the further rollout of EV chargers, which are vital to encourage adoption, especially bidirectional chargers, according to the report. In addition, residential tariffs at present fail to unlock cost savings from electricity consumption at off-peak periods, which would favour customers with EVs, solar and battery storage. Smarter tariffs are about to roll out in Britain, as a result of the widespread deployment of digital meters.

“We conclude that EVs will be an increasingly potent driver of change in home energy systems and wider electric grids over the next five to 10 years,” said co-author and financial analyst Arjun Flora. “Residential solar PV+battery+EV charging technologies are supporting the societal shift from default conventional electricity consumption, to a more active and conscious ‘prosumption’ behaviour.”

Arjun Flora is an analyst specialized in the new energy technology sector.