ALBANY, Aug. 24, 2015 (IEEFA.org) — The Institute for Energy Economics and Financial Analysis today released a research report that finds that a proposal to repower the Cayuga coal-fired electricity power plant as a natural-gas-fired plant is economically unviable and would create a long-term drain on ratepayers. 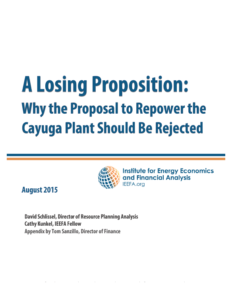 Cayuga Operating Company, a subsidiary of Upstate New York Power Producers, owns the 60-year-old plant, which is just north of Ithaca in Lansing, N.Y. The company is seeking approval from the New York Public Service Commission for its plan to repower the plant under a 10-year ratepayer-subsidized scheme that would begin in 2017.
The report, “A Losing Proposition: Why the Proposal to Repower the Cayuga Plant Should be Rejected,” includes three core findings:

David Schlissel, IEEFA’s director of resource planning and the report’s lead author, said the repowering proposal is part of a larger pattern of public subsidies for failing coal-fired power plants. “The bailouts are costing taxpayers a lot more than is necessary,” Schlissel said. “With the increased affordability of renewable energy and an option for transmission system upgrades, there are other, stronger alternatives to bailing out old, uneconomical coal plants like Cayuga.”

The report notes that the plant’s closure would create a fiscal challenge for the Lansing school district, Tompkins County, the Town of Lansing and two service districts amounting to an annual loss of $1.8 million. Tom Sanzillo— IEEFA’s finance director, a co-author on the report, and a former deputy comptroller for New York State — said the state has investment mechanisms and resources in place already to fill the void. “The costs involved with these changes can be borne by local governments, but that approach would be unnecessarily narrow and burdensome,” Sanzillo said. “This report shows that ample state resources exist to help the community and workers weather the transition, and points out that the New York Power Authority (NYPA) has both the financial and energy planning resources to spearhead redevelopment.”

The IEEFA report is being filed today with the New York Public Service Commission by the Sierra Club as part of the public comment period on the proposed Cayuga Repowering Plan, Case No. 12-E-0577.

About IEEFA — The Institute for Energy Economics and Financial Analysis (IEEFA) conducts research and analyses on financial and economic issues related to energy and the environment. The Institute s mission is to accelerate the transition to a diverse, sustainable and profitable energy economy and to reduce.