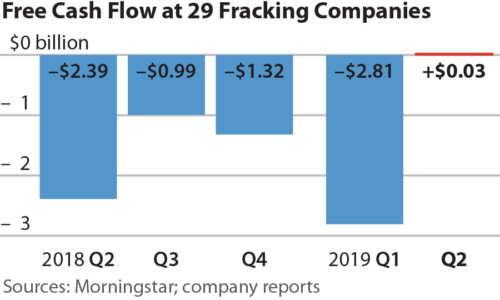 August 19, 2019 (Sightline/IEEFA) ‒ A review of 29 major fracking-focused oil and gas companies revealed meager cash returns in the second quarter of 2019, according to a briefing note released today by Sightline Institute and the Institute for Energy Economics and Financial Analysis (IEEFA).

“There were winners and losers this quarter, but overall, the oil and gas sector is still underperforming on virtually every financial measure,” said Clark Williams-Derry from Sightline Institute who co-authored the briefing note.

The analysts found that:

Investors should continue to view the sector as highly speculative

“As underwhelming as these results were, they were an improvement over previous quarters,” said IEEFA director of finance Tom Sanzillo. “Still, investors would do well to remain skeptical and view the sector as highly speculative.”

“Normally, positive free cash flow gives companies the ability to pay down their debt and reward stockholders, but so far, the fracking sector has been largely unable to achieve this,” said IEEFA financial analyst Kathy Hipple.

Much of the positive cash flow was attributed to one company in particular ‒ EOG Resources ‒ that posted $1.1 billion in free cash flow for the quarter, a turnaround of $1.5 billion quarter-over-quarter.

At the close of Q2 in 2019, the oil and gas sector was near the bottom of the Standard & Poor’s 500. By August 15, the sector hit rock bottom, with drilling, exploration and production and equipment and services leading the decline.

“Even the positive returns from EOG Resources failed to stop the downward slide of the company’s stock price,” said Williams-Derry. “Fracking remains a highly tenuous proposition for investors.”

Sightline Institute is an independent, nonprofit research and communications center. More can be found at www.sightline.org.