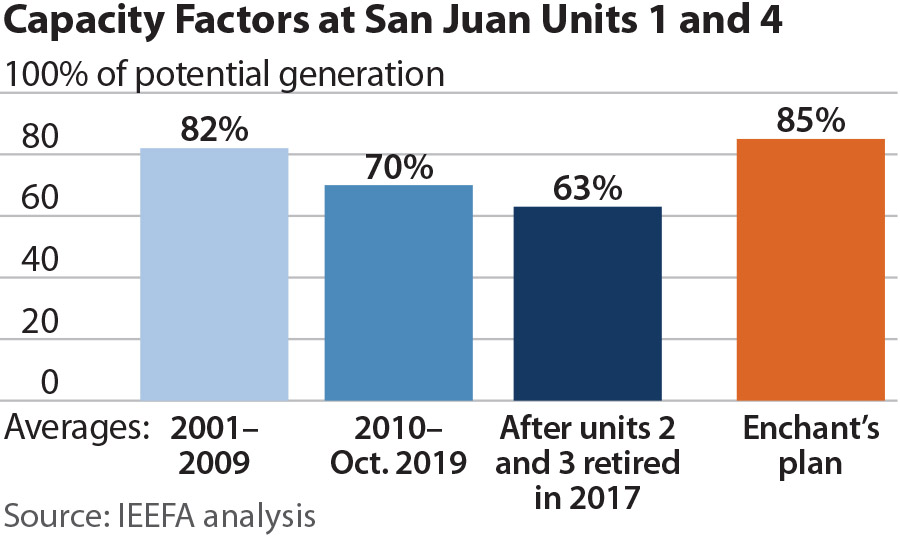 Feasibility is questionable and assumptions ambitious

Feb. 12, 2020 (IEEFA) — A proposal to turn the San Juan Generating Station in northwestern New Mexico into a carbon-capture project is doomed by core flaws in the business model put forth by its promoter, concludes a report published today by the Institute for Energy Economics and Financial Analysis.

The report, Enchant’s Proposed CCS Project at the San Juan Generating Station: False Promises and Major Risks, details how a newly formed company called Enchant Energy is making its case for the retrofit based on hollow assumptions and quixotic projections.

“Rational investors and regulators will dismiss all these assumptions and projections out of hand because the simple reality is that the proposed carbon capture retrofit at the San Juan Generating Station is not financially viable,” said Dennis Wamsted, an IEEFA analyst and co‑author of the report.

The plan being touted by Enchant has drawn attention globally for its promise that San Juan will become the largest carbon capture and sequestration (CCS) project in the world and, as such, serve as a template for struggling coal-fired power plants everywhere.

THE REPORT DETAILS FAULTY CALCULATIONS FROM ENCHANT ON A NUMBER OF POINTS. It concludes, for instance, that little more than unfounded conjecture is behind Enchant’s assertion that it can expand and improve on the questionable performance of the much smaller Petra Nova carbon capture project in Texas.

“The scale-up relative to Petra Nova in and of itself presents an enormous risk to the project’s feasibility,” said David Schlissel, report co-author and IEEFA director of resource planning analysis. “But even greater risks are evident in three assumptions made by Enchant, assumptions that all must hold true for the project to have even the slightest chance of being commercially viable.”

The three assumptions posit that:

The report explains why none of these assumption are likely to materialize, and how, as a result, investors that support the project will do so at their own peril and further, that regulators will be acting in the public’s best interest by examining the proposed retrofit with the skepticism it warrants.

“ENCHANT IS SELLING A FANTASY, ONE THAT REQUIRES BELIEVERS TO IGNORE THE SERIOUS RISKS associated with the proposal. This may work for Enchant, which can, in the end, always opt to walk away from the project (after pocketing federal grant money),” the report concludes. “Regulators, the City of Farmington, citizens, the state of New Mexico and investors won’t have that option.”