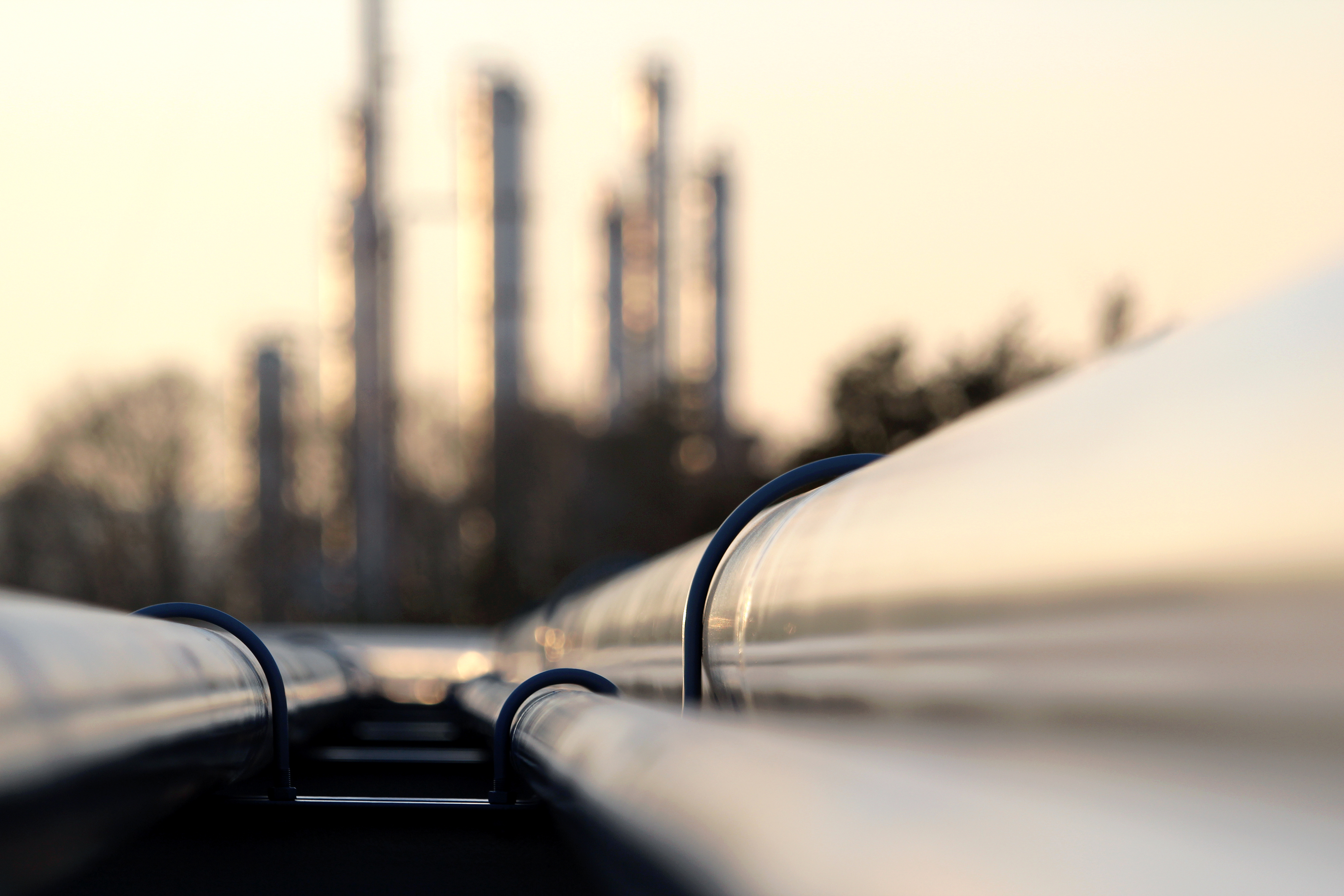 Carbon capture and storage (CCS) covers various technologies and processes. It is important for investors to be clear about the type of CCS being discussed.

A key impediment to CCS investments is insufficient verifiable data to demonstrate the effectiveness of the technology against stated claims.

When CCS is consistently demonstrated at commercial-scale, project costs and technical performance will need to be made available and verified to understand the actual deployment and mitigation costs, to prove it is an effective abatement option.

7 July (IEEFA Asia): Carbon capture and storage (CCS) projects are not yet ready to warrant them investable, according to IEEFA’s latest report by Guest Contributor Michael Salt, an energy economics and finance analyst.

“It is important for investors to distinguish between the type of CCS being discussed, as risks and opportunities differ in terms of technical and commercial maturity, environmental and social implications, as well as carbon mitigation potential,” says Salt.

Overall, Salt finds that a key impediment to CCS investments is insufficient verifiable data to demonstrate the effectiveness of the technology against stated claims.

Given the status of the technology, and the balance of risks, CCS needs to significantly evolve and be technically proven in order to be commercially viable at-scale, and, therefore bankable.

Many CCS applications remain an emerging technology, as CCS has only been meaningfully commercially deployed in gas processing, ethanol and fertiliser production.

Even so, actual capture rates and performance of CCS for gas processing—a mature technology applied since the 1970s—are generally unreliable, as IEEFA previously reported on Project Gorgon in Australia.

“The actual costs are largely untested and in most cases, unproven, as their performance and costs have not been verified by third parties,” says Salt.

In fact, only one commercial power plant equipped with CCS (the Boundary Dam project in Canada) is in operation globally, and one other fully commercial steel CCS facility (Emirates Steel project in Abu Dhabi) is associated with enhanced oil recovery.

“CCS for power generation has been challenged in meeting the industry target capture rates,” says Salt. “It is generally not seen as cost competitive with renewables and storage as a climate change mitigation option for the power sector.”

In harder-to-abate industrial sectors, such as steel and concrete, CCS has traditionally been viewed as one viable option for cost-effective, scalable emissions reductions.

“But with no commercial-scale cement projects (several planned) and only one commercial-scale facility for steel (and no plans for any new major steel projects with CCS), the validity of that claim is yet to be tested,” says Salt.

CCS for blue hydrogen also has performance issues and low adoption. “The environmental issues with the technology are of real concern, as recent analysis has shown it may increase emissions while claiming to be a clean energy vector.”

CDR technologies such as BECCS and DACCS capture carbon dioxide (CO2) directly from the atmosphere, followed by either utilization or storage. These technologies offer the promise of reducing emissions overshoot.

“Many credible organisations have pointed out that the carbon budget is likely not on track for 1.5°C and will likely be overshot, and that CDR is absolutely needed. But even if they prove commercially robust, there remain debates surrounding their environmental and social impact,” says Salt, citing concerns for the sustainability and impacts of the processes.

Marginal abatement cost (MAC) estimates the cost effectiveness for each CCS application to decarbonize for a tonne of CO2 ($/t-CO2). Technologies with lower MACs are generally considered a higher priority due to their ability to reduce emissions cheaply.

“Given the generally low level of commercial readiness across most CCS applications, lower MACs can only be achieved if there are economies of scale, process improvements, and increased competition between providers,” says Salt.

Salt notes that the global focus should not be diverted from the least cost, low-hanging fruit to support the energy transition. In most contexts, this is in the form of renewable energy deployment, electrification, and supporting grid modernisation investments to help move renewable energy to where and when it is needed.

“When CCS is consistently demonstrated at commercial-scale, project costs and technical performance will need to be made available and verified to understand the actual deployment and mitigation costs, to prove it is an effective abatement option,” he says.

“Additionally, the permanence of CO2 storage will need to be proven over a millennia timescale. This will require appropriate monitoring and verification standards, liability frameworks, and additional emissions buffers to protect the climate and public from CO2 leakage.”

Michael Salt has close to 12 years’ experience across engineering, sustainability technology and strategy, and energy finance and economics consulting. He is also an advisor on energy projects in the public and private sectors across the Asia Pacific region.

The Institute for Energy Economics and Financial Analysis (IEEFA) examines issues related to energy markets, trends and policies. The Institute’s mission is to accelerate the transition to a diverse, sustainable and profitable energy economy. (www.ieefa.org) 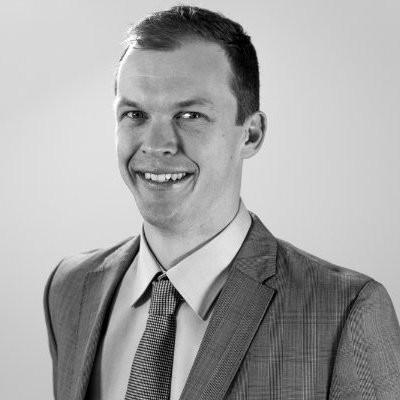 Michael Salt is a Guest Contributor at IEEFA. He has close to 12 years’ experience across engineering, sustainability technology and strategy, and energy finance and economics consulting. He is also an advisor on energy projects in the public and private sectors across the Asia Pacific region. 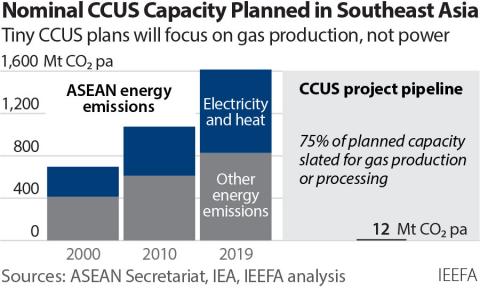 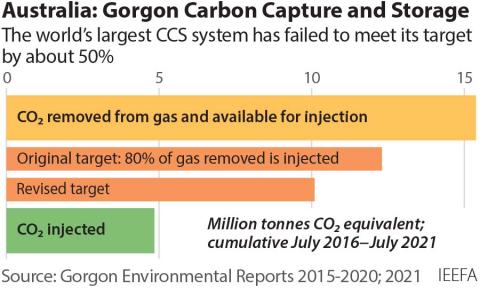 If Chevron, Exxon and Shell can’t get Gorgon’s carbon capture and storage to work, who can?
April 26, 2022
Press Release 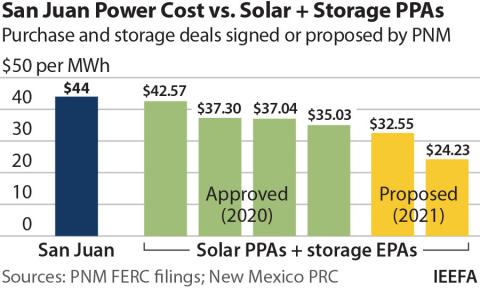