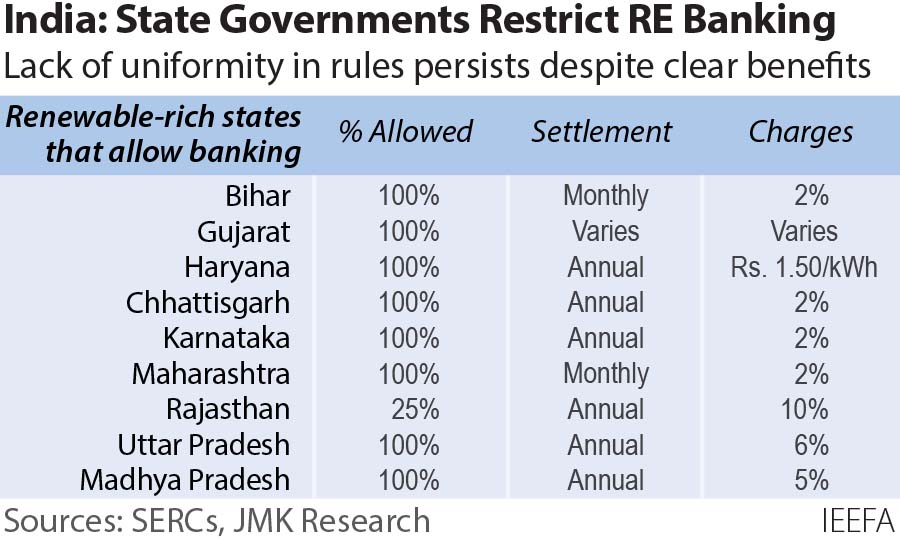 21 December 2021 (IEEFA/JMK Research India): New restrictions on banking of power will inhibit the growth of the rooftop and open-access solar market, and potentially slow progress towards India’s national target of 450 gigawatts (GW) of installed renewable capacity by 2030, according to a new briefing note by the Institute for Energy Economics and Financial Analysis (IEEFA) and JMK Research.

Banking allows renewable energy generators to deposit surplus power into the grid and withdraw it when needed – much like putting money into a savings account at a bank.

“Solar and wind projects are likely to produce excess energy during peak summer or windy seasons,” says co-author Jyoti Gulia, founder of JMK Research. “Without a banking facility or with banking restricted to monthly rather than annual periods, that excess generation is lost.”

The authors analyse banking provisions across key states, noting that some states, for example, Gujarat and Maharashtra, have moved from annual to monthly banking, and that banking provisions are likely to be restricted further to time of day or daylong across most states. In some states such as Andhra Pradesh and Tamil Nadu, banking facilities have been withdrawn altogether. 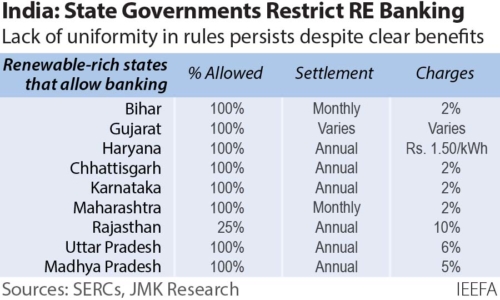 “This will be a major setback for renewable project developers at such an early stage in India’s renewable growth trajectory. The C&I segment’s renewable energy share is less than 1% of the overall electricity generation portfolio across most key renewable-rich states.”

The banking restrictions follow the introduction of net metering limits and the withdrawal of waivers for open-access renewable energy projects.

Co-author Vibhuti Garg, Energy Economist, Lead India at IEEFA, explains that power distribution companies (discoms) are concerned about the impact on their revenues of high-paying C&I consumers moving from conventional to alternative power procurement through the rooftop and open-access solar model.

“While imposing restrictions on banking will do little to help the discoms’ finances, it may have a significant impact on India’s renewable energy rollout which now needs to accelerate dramatically to reach the target of 450GW by 2030,” she says.

The authors suggest some ways forward:

About IEEFA: The Institute for Energy Economics and Financial Analysis (IEEFA) examines issues related to energy markets, trends, and policies. IEEFA’s mission is to accelerate the transition to a diverse, sustainable and profitable energy economy. ieefa.org Ginni Banga is a guest contributor at IEEFA.