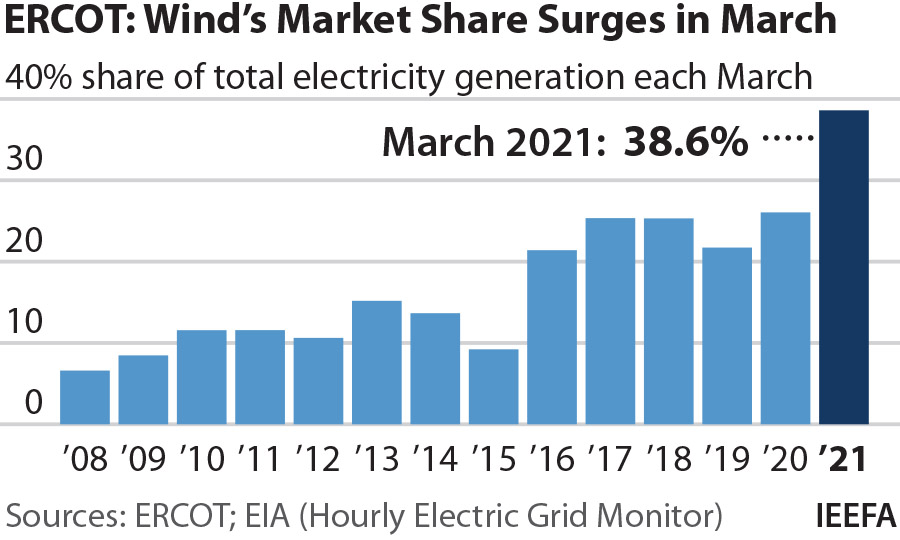 April 6, 2021 (IEEFA)—The transition from fossil fuels to wind and solar gained speed  in Texas in March. Data from the Energy Information Administration’s hourly electric grid monitor shows that wind generation in ERCOT smashed its previous high, topping 10.4 million megawatt-hours (MWh) during the month—2 million MWh above its previous high set last December. That stunning output pushed wind’s share of the ERCOT electricity market to 38.6% and the No. 1 spot in total generation, another first for the rapidly expanding resource. For the month, solar generation topped 1 million MWh, a level it had only reached three times previously (in June, July and August 2020). Combined, the two renewable resources accounted for 42.4% of ERCOT’s output during the month, well ahead of gas, at 30%, and coal, at just 14.9%.

This sharp jump in output can be traced to normal spring winds and to the continuing buildout of new wind and solar capacity in ERCOT. The transmission operator’s latest capacity installation report, released in February, projected that there would be 29,447 megawatts (MW) of wind capacity operating in ERCOT by the end of March, an increase of 2,343MW from the prior month. Similarly, the amount of solar was forecast to climb to 5,649MW from 4,473MW the prior month.

Those increases are putting rising pressure on the state’s fossil fuel generators, pressure that is only going to grow more intense in the next couple of years. By the end of 2021, ERCOT estimates more than 12,000MW of solar capacity could be installed within its service territory and the amount of wind could top 35,000MW. Even more capacity is expected going into 2022.

Another problem for fossil fuels is the dampening impact that the growing amount of renewable capacity is likely to have on prices, particularly during the high demand periods in the summer. Those times have traditionally provided an outsize share of annual earnings for many generators—earnings that are now threatened in particular by the surge of solar generation.

This development was clearly evident in the last two weeks of March. While still far from the state’s peak daylight period stretching from late May through late July, solar topped 7% of ERCOT’s daylight electricity demand on 12 occasions from March 15-31. That generation, coupled with the expected addition of more than 1,000MW of battery storage by July, will work to cap prices, posing more risks for the market’s fossil fuel generators.