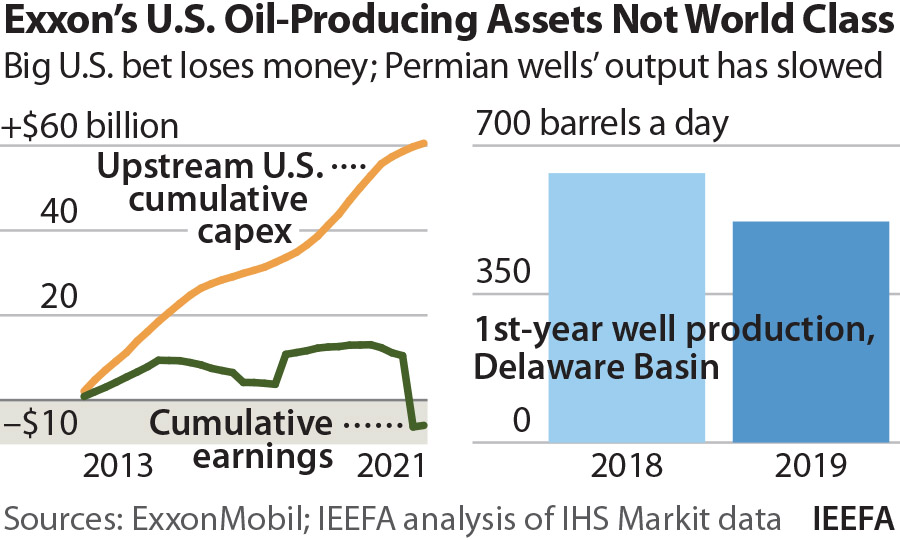 June 9, 2021 (IEEFA) – ExxonMobil’s claims that its Permian Basin oil and gas reserves are world-class will need the immediate attention of the new board, according to a new analysis by the Institute for Energy Economics and Financial Analysis (IEEFA).

In recent investor presentations, ExxonMobil has highlighted the superior performance of its oil wells in the Delaware Basin, a portion of the Permian that straddles western Texas and southeastern New Mexico. 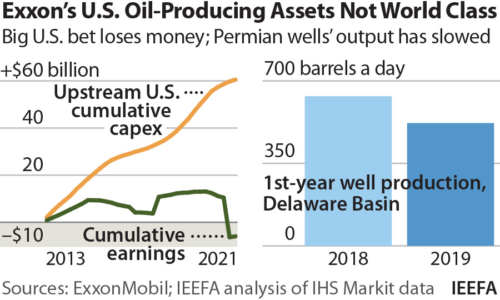 “Investors should place the company’s Permian plans under a microscope and demand better disclosure of both its financial and operational results in the region and its future contribution to the company’s share value” said IEEFA energy finance analyst Clark Williams-Derry, the report’s lead author.

ExxonMobil’s own data undermines its claims of world-class quality and industry-leading production in the Permian. In its 2020 presentation, the company claimed its wells were the best in the Delaware Basin, as measured by first-year oil production, and were steadily improving.

YET EXXONMOBIL’S 2021 INVESTOR PRESENTATION SHOWED ITS DELAWARE BASIN WELLS HAD SLIPPED into fourth place in the basin, with first-year production from Delaware wells lower than in the previous year. Meanwhile, ExxonMobil reported that its larger holdings in the Midland Basin showed middling performance, ranking seventh among seventeen peers.

On a closer look, ExxonMobil appears to be just another fracker

IEEFA analyzed the same data sources used in ExxonMobil’s investor presentations, and confirmed that the company’s well productivity ranks behind many of Exxon’s peers in the Permian. Moreover, the productivity of the company’s Delaware Basin wells has been declining since 2018, contradicting the company’s upbeat claims about improving productivity, industry leadership and world-class quality.

“ExxonMobil claimed to be the leader in Permian Basin oil production,” said Clark Williams-Derry, an IEEFA energy finance analyst and the report’s lead author. “But on a closer look, it appears to be just another fracker.”

THESE FINDINGS RAISE TROUBLING QUESTIONS ABOUT THE QUALITY OF THE COMPANY’S PERMIAN ASSETS,  the transparency of its investor disclosures and whether these reserves can be the company’s go-to asset in the coming years as planned.

After years of disappointing financial performance in its U.S. oil and gas portfolio, the company staked a huge bet on the Permian, building out its position with a series of acquisitions. Since 2014, the upstream portfolio, of which the Permian Basin is a key resource, has produced negative earnings.

“In the recent board elections, ExxonMobil’s shareholders demanded better accountability from the company’s board of directors,” said Tom Sanzillo, IEEFA’s director of financial analysis and co-author of the report. “These findings are a wake-up call for the new board. They go to the heart of the company’s reserve valuations, disclosure reliability and future as an oil and gas producer in a changing market.”

Clark Williams-Derry ([email protected]) is an energy analyst at IEEFA.

About IEEFA:  The Institute for Energy Economics and Financial Analysis (IEEFA) examines issues related to energy markets, trends and policies. The Institute’s mission is to accelerate the transition to a diverse, sustainable and profitable energy economy.