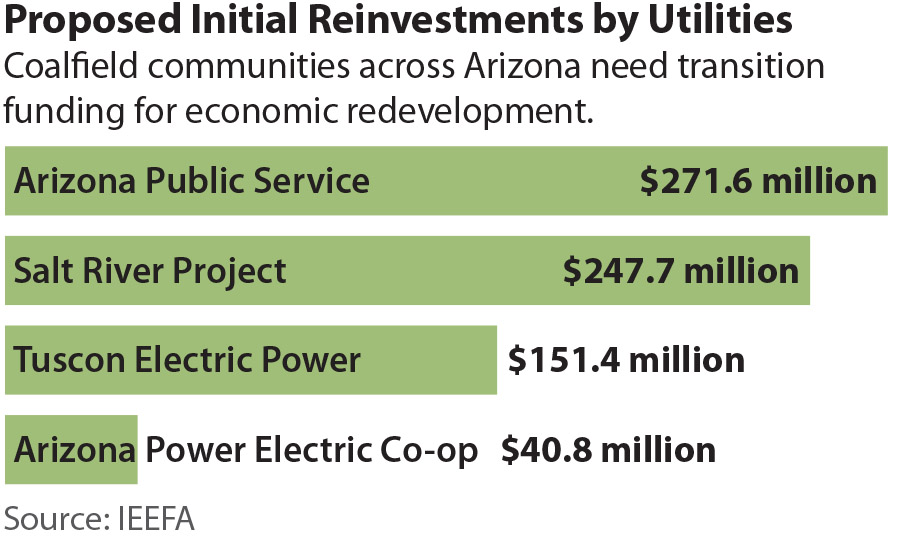 March 24, 2020 (IEEFA U.S.) — Arizona utility company reinvestments of $726 million in coalfield community modernization would serve the economic interests of Arizonans across the board, concludes a research brief published today by the Institute for Energy Economics and Financial Analysis (IEEFA).

The brief, A Coalfield Reinvestment Formula for the Grand Canyon State, describes an approach by which utility companies can reinvest initially—voluntarily or otherwise—in several communities that offer reinvestment opportunities now.

The calculations follow a formula suggested during the TEP rate case hearing in January by Jonathan Nez, president of Navajo Nation. Hopi leaders have also endorsed the Navajo proposal. Much of Arizona’s reliance on coal-fired power has been supported by the Navajo and Hopi communities that are now being abandoned by the utility companies.

The formula assigns $100,000 in initial reinvestment outlays for every megawatt of coal-fired power generation owned over the years by the four utility companies across the energy economy of greater Arizona, which includes northwestern New Mexico, one of the cornerstones of the electrification of urban, suburban and parts of rural Arizona. 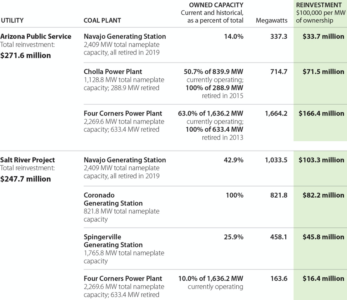 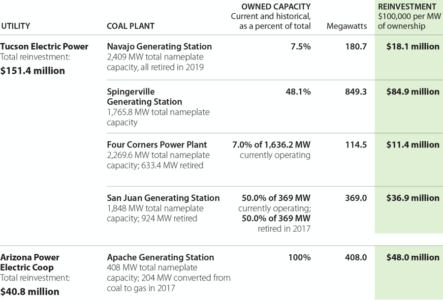 “The Navajo formula is elegant, simple, and fair,” said Karl Cates, an IEEFA policy analyst and lead author of the brief. “Its broader application would replace lost tax revenues and jobs while driving power sector modernization around existing power-transmission infrastructure. It would tap into skilled work forces that have operated coal mines and coal-fired plants since the 1970s, and drive serious reinvestment in important non-energy infrastructure, healthcare, and education.”

The brief builds on an IEEFA report published in February (The Case (and the Mechanisms) for Utility-Company Reinvestment in Arizona’s Coalfield Communities ) examining three mechanisms by which initial reinvestment could be directed: by the Arizona Corporation Commission, by the SRP board, or by legislative action.

The brief  also points out that the coalfield communities in question are part of a larger national patchwork facing a post-coal world that favors other forms of power generation.

“Nothing about what is happening to the coalfield communities of greater Arizona is occurring in isolation. The American coal industry is collapsing across the board as momentum gathers around market forces that favor other forms of power generation.”

It notes as well that major coalfield reinvestment initiatives have taken root elsewhere in the U.S., notably in Colorado and Washington, as well as in Germany.

“Arizona utility companies can follow—or can be made to follow—these examples in a way that ensures reinvestment on a similar, responsible scale across the state’s coalfield communities, all of which are open for reinvestment now and for the foreseeable future,” it concludes.