IEEFA update: Australian consumers paying 71% more for gas on average than government inquiry says they should be paying

The federal government commissioned the Australian Competition and Consumer Commission (ACCC) to produce a gas price series designed to compare domestic prices to those of Australia’s customers in Asia while allowing for the increased costs of exporting gas, as part of a broader gas enquiry in response to increasing industry and consumer concerns over high gas prices. The inquiry started in April 2015 however the netback price was calculated as part of the extended inquiry in October 2018.

The gas price series shows that as at 21 October 2019 when the most recent data was released, the ACCC “netback” price – calculated by taking the delivered price of LNG and subtracting the costs of liquefying natural gas and shipping it to the destination port – was just $5.19/GJ yet Australian customers were paying $8.88/GJ for their gas.

Bruce Robertson, gas analyst with IEEFA, says the ACCC price series has highlighted what we already know – there is a huge discrepancy between the extremely high domestic gas prices we are paying, and LNG export prices.

“AUSTRALIAN GAS CONSUMERS ARE PAYING ON AVERAGE 71% MORE FOR GAS THAN THEY SHOULD in various gas markets around the country,” says Robertson.

“In Adelaide the price is nearly double the ACCC benchmark price, yet South Australia is a major producer of gas for domestic and export markets.

“There is no cogent reason apart from price gouging for these exponential prices to occur.”

Over the three months consumers are paying 57% more than the ACCC benchmark netback price and 19% more than Australia’s Japanese customers.

The largest importer of Australian LNG is Japan. Japan has virtually no domestic gas sources and is one of the most expensive gas markets on the globe.

Japan’s Ministry for Industry Trade and Industry (METI) shows that customers of Australia’s export gas in Japan were paying only $6.88/GJ in October 2019.

“THAT THE COUNTRY CAN PROVIDE GAS TO AUSTRALIA’S EXPORT CUSTOMERS AT A PRICE CHEAPER THAN DOMESTIC CONSUMERS IS A TOTAL POLICY FAILURE at both state and federal levels of government.

Gas sets the price of electricity in Australia because it is the highest cost producer in the electricity market. Domestic gas prices have become unaffordable for industry, the domestic consumer, and for electricity production.

“High gas prices cause high electricity prices. Consumers are already bleeding with bills higher than they were prior to 2014, when the east coast of Australia enjoyed stable domestic gas supply with reasonable prices of $3-4/GJ.

“The extent of the domestic price gouge highlights the pressing need for government intervention in a failed market.” 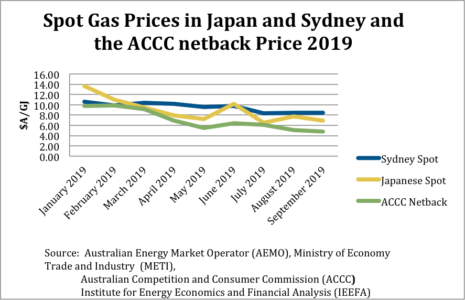 Spokesperson contact: Bruce Robertson can be contacted via [email protected]