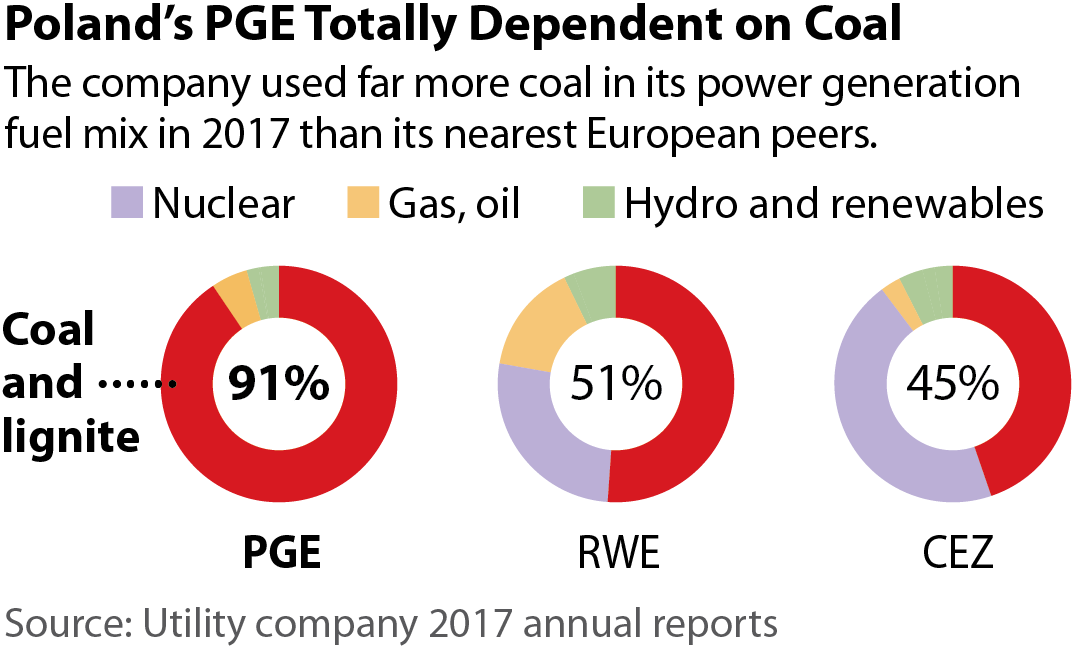 A strategic shift toward a renewable energy-based portfolio, on the other hand, would be in the utility’s best interest, the report finds.

“If PGE continues on its present coal-dependent path, the net cost of such a strategy, on a present value basis, could be billions of euros higher than if it pursued an accelerated deployment of renewables,” said Gerard Wynn, an IEEFA financial consultant and co-author of the report. “A modern renewables-driven energy strategy would make far more sense.” 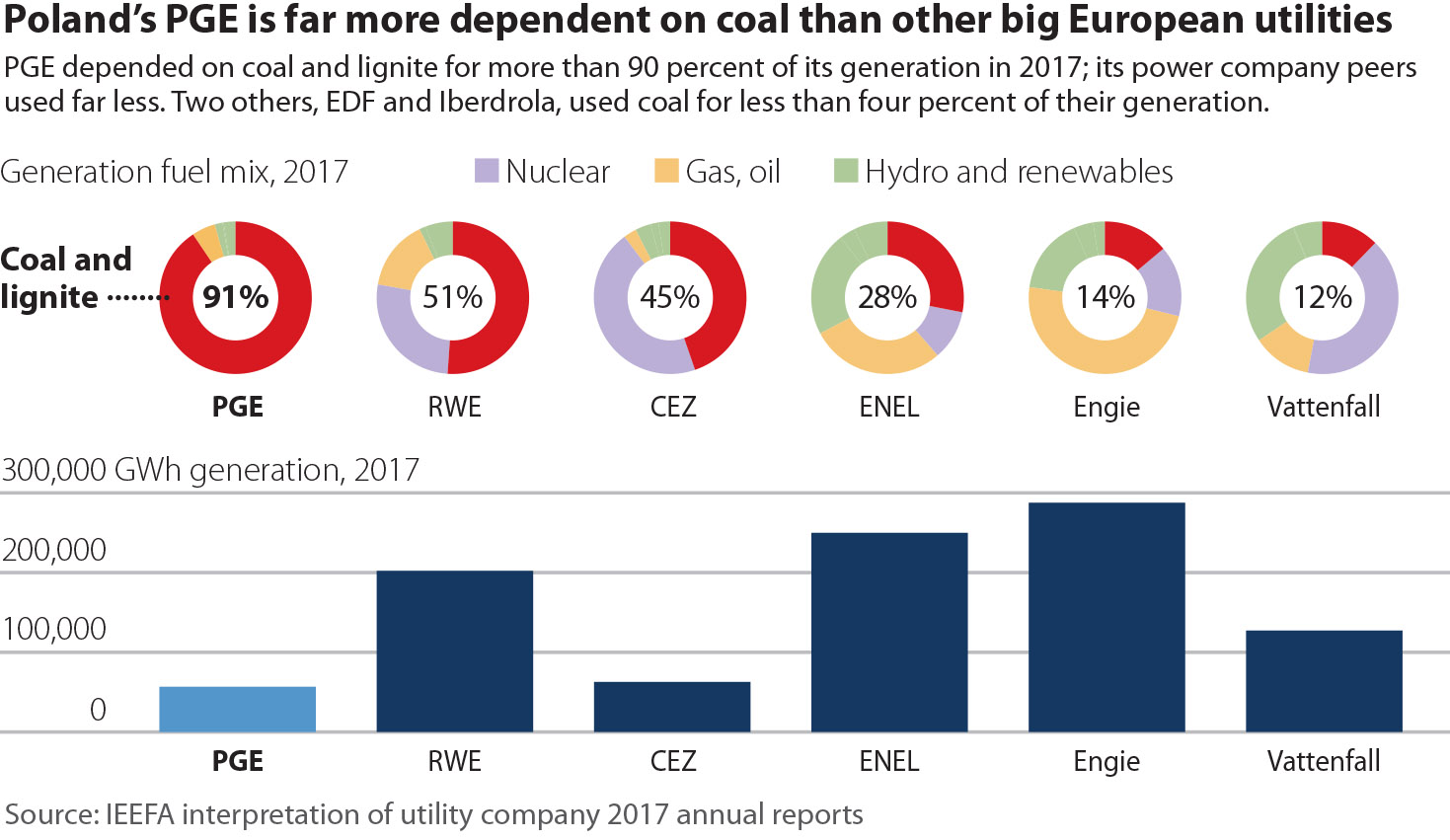 The report—“Decision Time at Poland’s PGE: Why a High-Risk, Fossil-Heavy Strategy Doesn’t Add Up”—describes how tougher European Union air-emissions standards will hit PGE especially hard because coal accounts for more than 90% of its electricity generation. Indeed, PGE is arguably the European utility that will be most affected by the new regulations, known as BREF.

Based on the most recent available data from PGE, Wynn and report co-author Paolo Coghe conclude that less than a third of the utility’s 15 smokestacks meet the new EU standards for three critical health pollutants: oxides of nitrogen, oxides of sulphur, and dust. They said PGE is in a position where it must choose now between closing the non-compliant units and turning to cleaner alternatives or investing substantially to make them compliant with BREF.

To date, PGE’s strategy has been to double down on its coal facilities in an initiative that includes plant upgrades to meet emission standards. But these upgrades could raise generation costs from burning brown coal, known as lignite, by 15%, and hard coal generation costs by 10%.

“PGE is presently marching in the opposite direction of a global low-carbon transition and is being outpaced in that transition by most of its European utility peers,” Wynn said. “A more than trebling of European carbon prices in the past 12 months is further fuelling coal generation costs.”

While PGE has argued that a “significant easing of climate policy” would make its coal-generation strategy viable, such a change is unlikely and regulations may only grow more stringent.

“It would be wiser to prepare for a much more aggressive tilting of climate policy, for example by committing to a target year for full decarbonization,” Wynn said.

The report uses levelized cost of electricity analysis (LCOE) to show that ongoing deflation in renewables costs, including onshore and offshore wind and solar power, makes renewables broadly competitive with coal- and lignite-fired generation after accounting for BREF upgrade costs.

The report notes that rising carbon and BREF compliance costs may make it more difficult for PGE to compete in Poland’s new capacity market, just as major coal-plant upgrades and new-build and acquisition programmes are creating greater urgency to secure such capacity payments.

If carbon allowance prices rise, a possibility that is very real and is largely out of PGE’s hands, the utility will have to spend increasing amounts of capital to cover its carbon emissions obligations. In addition, should PGE fail to secure timely, long-lasting, reliable and appropriately sized capacity payments, the financial consequences could be dire.

“PGE is already investing significant capital to bring its oldest coal and lignite power plants into compliance with the EU’s new air pollution standards, with the goal to maintain the company’s market leader status in power and heat generation in Poland,” said Coghe. “But this strategy exposes PGE to massive risk from the EU carbon and makes it reliant on the Polish capacity market. Critically, these risks are additive, and largely or wholly outside PGE’s control.”

The authors combined estimated BREF compliance and carbon costs and capacity market risks in a “hurry versus wait” analysis, which compared two scenarios in a stylized thought experiment. The analysis shows that it may be cheaper and less risky to change course and accelerate the deployment of renewables.

The analysis compared a “hurry” option entailing an overnight shift to 100% renewables with a “wait” option that would maintain PGE’s existing energy mix. The analysis focused on PGE’s power generation business, excluding sales of heat.

Even under the most favorable (and highly unrealistic) conditions, including zero growth in carbon prices and nearly 30 years of continuous capacity payments, carbon costs outweigh capacity market revenues by more than two to one.

Under this set of assumptions, the fossil-fuel-heavy “wait” scenario would be €3 billion more costly to PGE and its investors than switching to renewables.

Paolo Coghe is president of Acousmatics.
Go to Profile
>