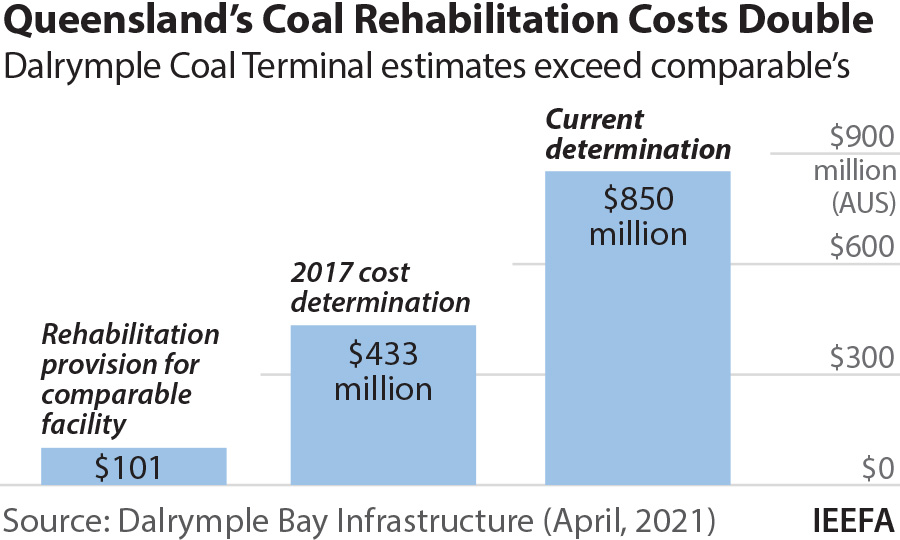 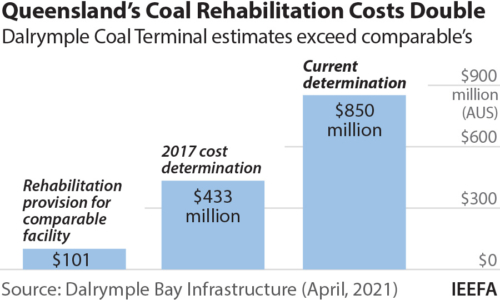 Author of the note IEEFA guest contributor Owen Evans says whereas in normal circumstances this increase in rehabilitation provision would negatively impact the value of a company, in this case, the asset owner Brookfield has struck a win.

The asset owner Brookfield has struck a win

“The QCA is about to finalise its 2019 pricing determination for Dalrymple Bay Coal Terminal (DBCT) allowing a near doubling of the rehabilitation provision to $850 million,” says Evans.

“This is very concerning.”

Evans says the QCA is supposed to protect consumers from being taken advantage of by providers of monopoly-priced services that are not regulated by the Commonwealth. Typically these are services provided by the state or local council.

“The QCA has progressively gotten involved in pricing for coal freight services and coal handling charges, which is how it got involved with DBCT,” says Evans. “Why this has happened is not clear. The benefits to the citizens of Queensland from the QCA’s involvement in the coal chain are not obvious.”

The major shareholders in Dalrymple Bay Infrastructure, the parent company of DBCT, are Brookfield and the Queensland Investment Corporation (QIC).

“The latter is one of the largest state-owned entities in Queensland, and the former has an equity base of US$120 billion and a reputation for being quite capable of looking after itself. We suspect both can look after their interests without the help of the QCA,” says Evans.

QCA is effectively allowing DBCT to increase its regulated asset base

“By increasing the size of the rehabilitation provision QCA is effectively allowing DBCT to increase its regulated asset base and therefore what it charges customers. It is not a normal outcome that companies benefit from recognising large clean-up costs.”

Evans notes in this instance the decision by the QCA to accept this level of provisioning is “most odd” because they have a real-time company to compare with DBCT.

Port Waratah Coal Terminal, of similar value and operations to Dalrymple, has a rehabilitation provision of just $101 million to restore its site at close of business.

“That the QCA took so long to make a decision and then made it without any noted comparison to a similar operator in the same industry is weird. And then to increase its previous 2017 determination by 96% is staggering,” says Evans.

“One really has to ask the question – is the QCA being played by Brookfield regarding the terminal’s future rehabilitation costs?

“It is hardly the regulator’s job to facilitate an increase in the value of DBI by allowing inflated rehabilitation costs to be included in the notional asset base.

“Over the next decade Australia will go through an unprecedented amount of industrial rehabilitation as power stations, oil fields, smelters and mines opened in the 1970’s and 1980’s resources boom come to the end of their productive lives.

“The risk is that the QCA starts unintentionally setting dangerous precedents for rehabilitation costs, a portion of which will inevitably be borne by the taxpayer.”