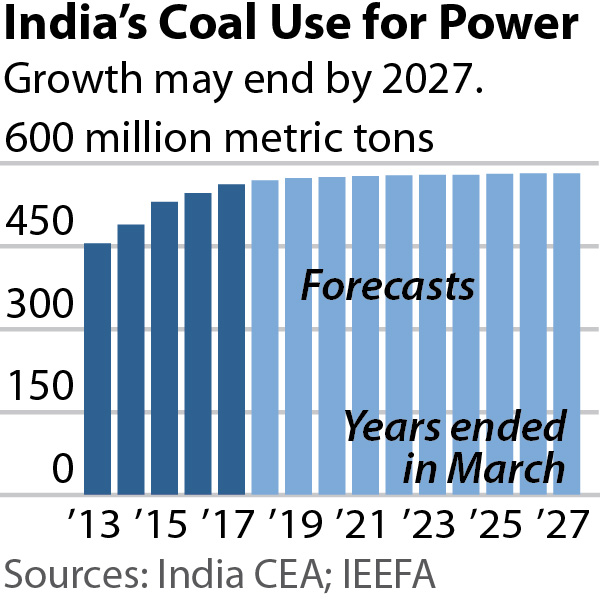 Nov. 21, 2017 (IEEFA) — New research by the Institute for Energy Economics and Financial Analysis sees India within a decade of peak thermal coal demand.

In a report published today—“India’s Electricity Sector Transformation: Momentum Is Building; Peak Coal in Sight”—the institute projects a significant increase in renewable energy generation across India, a trend that will be pushed by sharply falling prices and major efficiency gains over the next 10 years.

Tim Buckley, lead author of the report and IEEFA’s director of energy finance studies, Australasia, said that—as a result—Indian demand for imported coal will most likely decline, undercutting what U.S. and Australian exporters had hoped would be a long-term growth market. 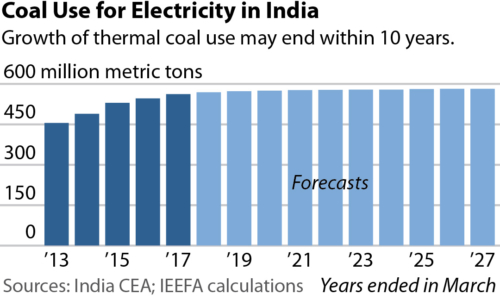 “IEEFA forecasts that India’s thermal coal use is likely to peak not more than 10 percent above current levels, a far lower peak than most other analysts are forecasting,” Buckley said. “India’s target to all but cease thermal coal imports by the end of this decade is now the logical economic outcome.”

The conclusion is in stark contrast to the International Energy Agency’s forecasts, which have Indian coal use doubling by 2040.

“IEEFA would challenge IEA’s coal-centric view of the world as entirely out of touch with energy developments in India under Prime Minister Modi,” Buckley said. “While IEEFA acknowledges that our forecasts are non-consensus, we believe strongly in them and note that we were ahead of the pack in predicting a similar transition in China.”

“India’s national decarbonisation policy is in line with global trends, which have seen renewable energy infrastructure investment running at two to three times the level of new fossil fuel capacity investment since 2011,” Buckley said. “India is on track to catalyze US$200-300 billion of new investment in renewable energy infrastructure over the coming decade, and IEEFA expects global capital inflows will play an increasingly important role.”

“While there are significant emissions reduction and pollution benefits from this clear and consistent energy policy, its strength comes from the fact that it is the economically sensible path: renewable energy is now the least-cost solution to deliver sustainable growth for India.”

Buckley noted that many commentators have questioned whether renewable-energy tariffs of Rs2.44-2.65/kWh (US$38/MWh) can be sustained, but said such skepticism is unwarranted.

“IEEFA would point to the latest renewable tender results in Mexico and Chile just this past week, where solar costs have fallen more than 50 percent in less than two years to new world record lows of less than US$18/MWh and US$21/MWh, respectively.”

Buckley said Indian renewable-energy tariffs might stabilize at Rs2.44-3.00/kWh in the near term, but that further sustained, long-term cost decline as inevitable.

IEEFA conducts research and analyses on financial and economic issues related to energy and the environment. The Institute’s mission is to accelerate the transition to a diverse, sustainable and profitable energy economy.