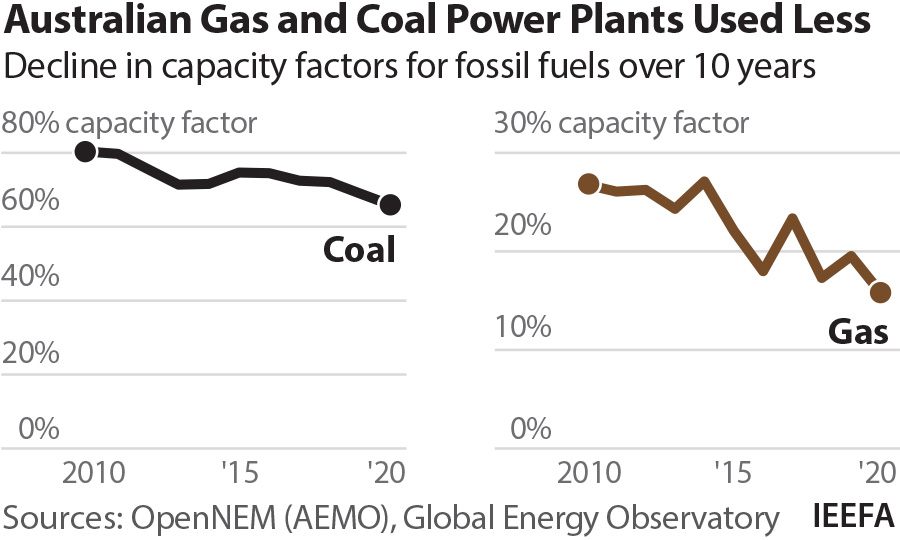 24 June 2021 (IEEFA Australia): The Australian government may be relying on inaccurate financial assumptions for its gas-fired recovery as most gas- and coal-fired power plants in Australia, the UK, the U.S. and China are being operated less and less – what’s called a declining capacity factor, finds a new report by the Institute for Energy Economics and Financial Analysis (IEEFA).

Report author and LNG/gas analyst Bruce Robertson says a declining capacity factor poses serious risks to investors in fossil fuelled power plants if they have relied on financial modelling which anticipates power plants having a constant capacity factor throughout their lifetime, meaning they expect a plant to produce electricity at a constant level, every year, until the end of its life.

“Far from being constant, our research shows that the capacity factor for coal-fired power plants has been declining globally since before the beginning of last decade – with many soon to become stranded assets,” says Robertson.

“Similar to the downward trend in coal, the capacity factor of gas-fired power plants’ is also forecast to decline.

“Yet financial modellers are still basing their calculations on the assumption power plants are producing ‘constant’ power over their lifetime. This leads to an underestimation of the cost for each unit of electricity to be produced over the power plant’s lifetime – what’s called levelized cost of energy (LCOE). And this cost underestimation causes a financial overvaluation of the energy asset, which can mislead potential investors.

Cost underestimation causes a financial overvaluation of the energy asset

IEEFA’s report examines the capacity factor and levelized cost of energy (LCOE) of power plants – financial tools for determining the financial value of a power plant over its lifetime.

It found widely cited energy authorities including the U.S. Energy Information Administration (EIA), the International Energy Agency (IEA) and the Commonwealth Scientific and Industrial Research Organisation (CSIRO), in addition to financial institutions, continue to rely on a ‘constant’ rate of capacity factor in their LCOE calculations.

IEEFA’s research however demonstrates a declining (not constant) capacity factor of fossil-fuelled power plants in four key regions across the globe: Australia, China, the UK and the U.S.

The capacity factor of coal-fired power plants operating in Australia’s National Electricity Market (NEM) has declined by about 24% since 2008, and by about 19% in China since 2007.

“Linear forecasting shows the capacity factor of coal-fired plants in China will fall below 40% in the next 4 years,” says co-author and energy analyst Milad Mousavian.

The UK’s collapse in capacity factor has caused numerous stranded assets, with the UK’s coal era now forecast to end in 2022.

“There is no financial rationale for investing in this collapsing energy asset,” says Mousavian.

Australia’s NEM data shows an even more severe drop than that occurring in the U.S. 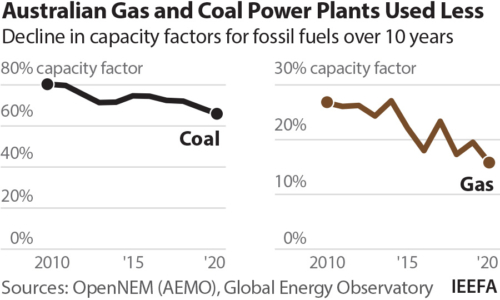 “This 41% drop since 2010 shows gas-fired power plants in Australia are likely to be stranded assets into the future,” says Robertson.

“If the Australian government is relying on a constant rather than the more realistic declining capacity factor over the lifetime of a new gas-fired power plants’ life, they are hoping for an unrealistically low cost figure for generating electricity from that plant, and they are, perhaps mistakenly, misleading potential backers as to the real value of the asset.”

IEEFA notes that for the protection of all investors, the assumption of a constant capacity factor should be revised in order to avoid financial overvaluation of fossil-based energy assets.

Investors are relying on inaccurate modelling

“Until that occurs, investors are relying on inaccurate modelling,” says Robertson.

“This poses an even greater risk when massive government investment enters the market in the form of subsidies such as through the Australian government’s spending on a gas-fired recovery.

“Investors take note. Our capacity factor and LCOE analysis shows that investing in gas-fired projects does not make financial sense.”