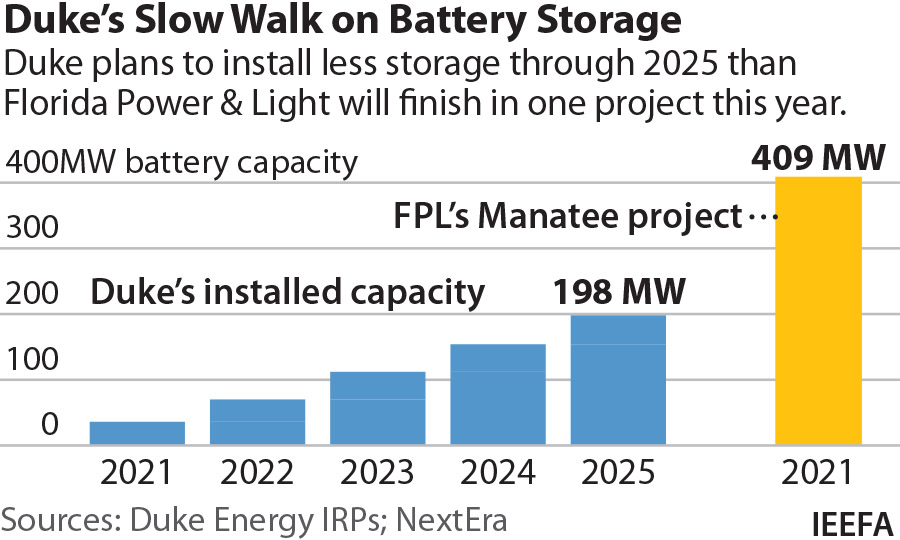 February 18, 2021 (IEEFA) — Duke Energy’s plans for its two utilities in the Carolinas rely on outdated cost estimates to avoid expanding battery storage capacity, according to a new study by the Institute for Energy Economics and Financial Analysis (IEEFA). In their latest integrated resource plans (IRPs), Duke Energy Progress and Duke Energy Carolinas both acknowledge launching grid-connected storage systems in the next five years. The plans, however, indicate the utilities view battery storage as more of a pilot project than a commercially viable alternative to gas-fired plants.

“Something is clearly amiss if the cost figures for battery storage used by Duke in drafting its IRPs are so high that it will essentially sit out the next five years while other utilities push forward with economically viable projects,” said Dennis Wamsted, an IEEFA energy analyst and author of a series of reports analyzing the utilities’ plans.

Duke notes in its plans that it is relying on data from the U.S. Energy Information Administration, which in turn is using cost estimates from 2019. The estimates peg the capital costs of a 50 megawatt/200 megawatt-hour plant at $347 per kilowatt-hour (kWh)—far higher than the cost of units that entered commercial service in 2020, according to Lazard data

Duke’s aversion to battery storage stands in stark contrast to many other U.S. utilities, which are moving forward aggressively to add storage to their grids.  Florida Power and Light, for example, just began construction of a large battery storage facility in its service territory that will allow it to retire aging gas-fired plants, saving ratepayers an estimated $100 million.

“Before North Carolina regulators sign off on Duke’s IRPs, they should require the company to issue a request for proposals for several battery storage options,” Wamsted said. “Failure to do this risks saddling ratepayers with new, soon-to-be-stranded gas-fired generation capacity, and ignores the compelling economic case that has led other utilities across the U.S. to rapidly add energy storage as a key part of their power infrastructure.”