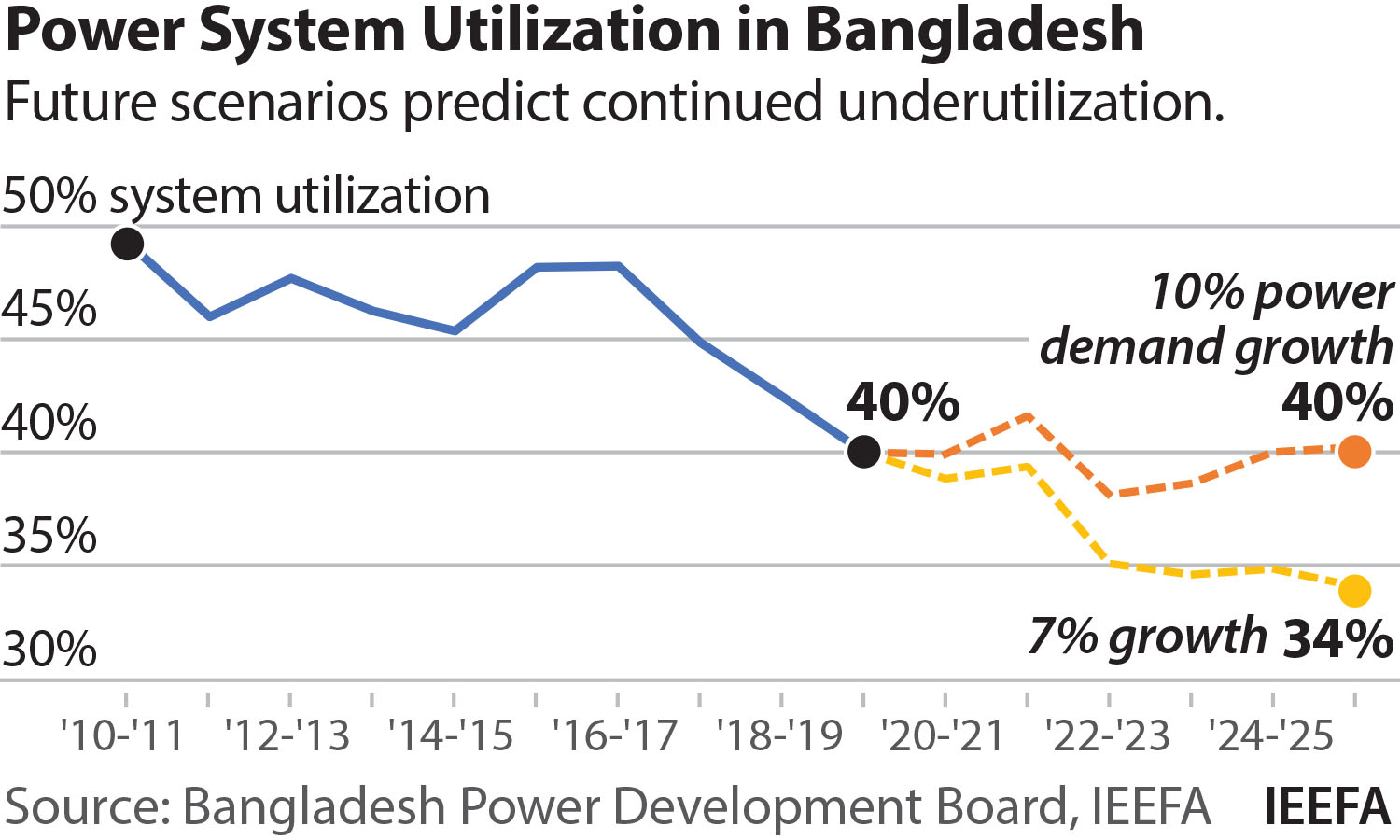 20 January 2021 (IEEFA Bangladesh): Overcapacity in Bangladesh’s power system has worsened and threatens to deteriorate further according to a new briefing note released by the Institute for Energy Economics and Financial Analysis (IEEFA) today.

Data from the Bangladesh Power Development Board’s (BPDB) latest annual report shows that overall power capacity utilisation in fiscal year 2019-20 was just 40%, down from 43% in the prior year – a clear sign of worsening overcapacity.

“With another 21,000 megawatts (MW) due to come on line by 2025 and only 5,500MW of old capacity due to be retired, utilisation will drop below 40% unless a very high rate of power generation growth is maintained,” says Nicholas.

Power generation growth was just 1.26% in 2019-20, barely keeping pace with population growth, as the economic impacts of COVID-19 were felt in Bangladesh.

Worsening overcapacity has significant implications for the BPDB’s finances

IEEFA estimates that capacity utilisation will drop below 40% over the next five years unless power generation growth is maintained at or above 10% per annum.

“Worsening overcapacity has significant implications for the BPDB’s finances as well as power tariffs,” says Nicholas.

“Under power purchase agreements, thermal power generators receive capacity payments regardless of whether they are utilised or not.

“Capacity payments to power plants that increasingly sit idle raise the per unit cost of generation. This will result in the need for higher government subsidies to bail out BPDB’s losses and/or the need to increase power tariffs for consumers.”

“On top of the overcapacity problem, the planned future reliance on expensive imported coal and LNG will raise the per unit fuel cost for thermal power,” says Nicholas.

“Several tenders for LNG imports into Bangladesh have been cancelled due to concern over high prices during 2020. This concern is likely to intensify now that Asian LNG prices have soared to a new high in early 2021.

“Furthermore, there is still a significant amount of new, expensive oil-fired power generation set to come online which will add cost pressure onto the BPDB in addition to imported coal and LNG.”

More than 1,000MW of new oil-fired power is scheduled to be operating by the end of 2021 according to the BPDB.

A new Power System Master Plan (PSMP) is currently being prepared for release in 2021. It has been reported that overcapacity and fuel issues are amongst the priority issues to be addressed in the new plan.

Nicholas agrees that these are key priorities.

“It has been reported that the Bangladesh government is considering cancelling the coal-fired power project pipeline and replacing them with LNG projects. However, replacing coal power capacity with similar capacities of LNG-fired capacity will not address the nation’s overcapacity issue,” says Nicholas.

“Instead of replacing the coal power projects with LNG, the Bangladesh government should consider using the land set aside for these projects for renewable energy installations. This could effectively jump-start Bangladesh’s utility-scale solar and wind power build-out and push down renewable energy tariffs as happened in neighbouring India.

“The Sustainable and Renewable Energy Development Authority’s (SREDA) draft National Solar Energy Roadmap recommends aiming for a high-deployment solar installation program with a target of up to 30,000MW of solar to be installed by 2041.

“SREDA sees 12,000MW of this 30,000MW target coming from rooftop solar. Rooftop solar capacities of this scale look entirely achievable given that Vietnam was able to add an astonishing 9,000MW of rooftop solar in 2020 as the global roll out of renewable energy accelerates.

“Another key part of a successful response to Bangladesh’s overcapacity problem would be investment in the transmission and distribution system. Not only would this enable the installation of larger capacities of renewable energy, it would also help better utilise existing thermal power capacity.

“A switch in focus from thermal power capacity installation towards grid investment would make better use of Bangladesh’s surplus capacity and see a reversal of the nation’s declining capacity utilisation, thereby reducing the impact of capacity payments on the per unit cost of power.”

Read the report: Power Overcapacity Worsening in Bangladesh Switch in Focus From Coal and LNG To Renewables and Grid Can Address the Problem