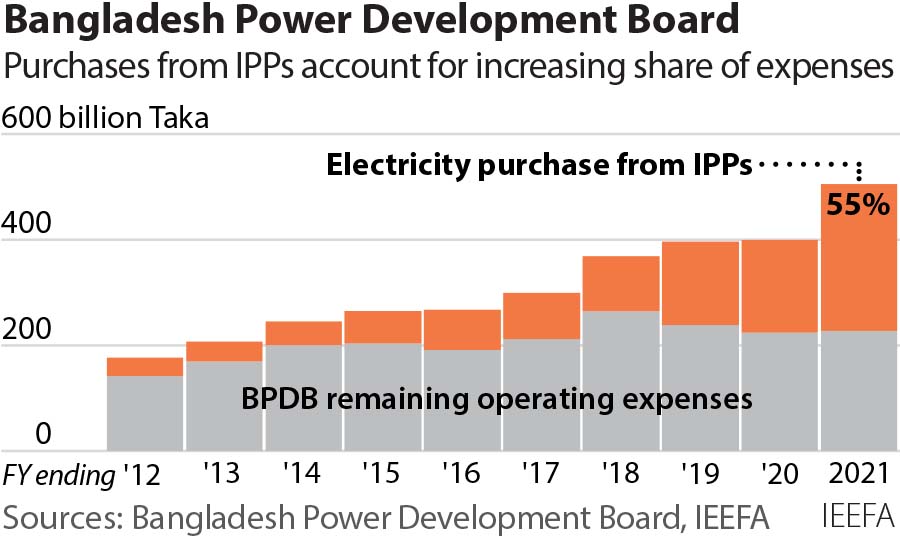 11 February 2022 (IEEFA Bangladesh): In order to limit the need for large tariff increases, Bangladesh’s new power system master plan must focus on grid investment and renewables rather than switching focus from imported coal to imported LNG, finds a new report from the Institute for Energy Economics and Financial Analysis (IEEFA).

A new Integrated Energy and Power Master Plan (IEPMP) is currently being prepared for Bangladesh, funded by the Japan International Cooperation Agency (JICA).

Energy analyst and author of the report Simon Nicholas says that it represents an opportunity for Bangladesh to halt the construction of planned LNG and coal power plants and reset the planning to provide a financially sustainable power system for the long term.

“Building domestic low cost clean energy capacity would help improve the eroding financial status of the Bangladesh Power Development Board (BPDB) which is burdened by the country’s capacity over-expansion based on imported fossil fuels,” says Nicholas.

“Any further focus on imported volatile fossil fuels is a warning to energy consumers in Bangladesh. Further significant and economically damaging power tariff growth is more than likely.”

“BPDB is sinking under the increasing cost of power generation and purchase based on imported coal, liquefied natural gas (LNG) and oil,” says Nicholas.

“In FY2020-21 a record high government subsidy was required to cover the BPDB’s operating loss which doubled from the previous year.

“The new power system master plan led by JICA should not call for increased imports of fossil fuels, which will further damage tariffs.

“Bangladesh energy consumers are at risk of being asked to pay massive tariff increases to cover shortfalls being experienced by the BPDB.

“This is not sustainable, and does not address the root of the problem in the power sector.”

BPDB’s financial status is being eroded by the current overcapacity in the power system, rising capacity payments being provided to under-utilised power plants – which reportedly increased again to Tk132 billion (US$1.5 billion) in FY2020-21 – and the growing reliance on price-volatile imported fossil fuels.

This led to a 58% rise in Independent Power Producer (IPP) costs in FY2020-21. For the first time, the cost of power purchases from IPPs represented more than 50% of the BPDB’s total operating expenses.

The new Payra coal-fired power plant, which is receiving capacity payments whilst half the plant stands idle because of insufficient transmission infrastructure, was the largest single contributor to the increase. 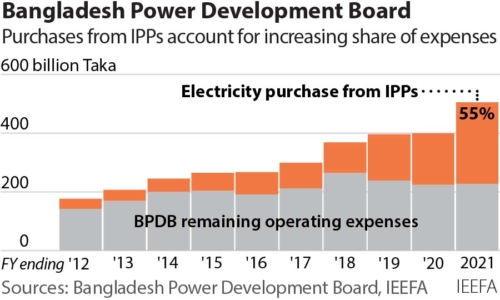 “With more IPPs due to come online – and more coal and LNG plants being planned – BPDB’s operating losses can be expected to worsen going forward,” says Nicholas.

“The record high government subsidy to the BPDB in FY2020-21 cannot be regarded as a peak.”

“Becoming increasingly dependent on imported fuels such as LNG will result in larger government subsidies to bail out the BPDB’s losses, and large power and gas tariff increases for Bangladesh energy consumers,” says Nicholas.

“Given the power system’s already very low overall utilisation rate of just 42%, JICA must focus on grid investment and renewables in the new master plan to improve reliability and limit the country’s future dependence on expensive, imported fossil fuels.”

Nicholas says the higher renewable energy ambition of the Sustainable and Renewable Energy Development Authority (SREDA) and the Mujib Climate Prosperity Plan must be reflected in the new energy and power master plan.

“If Bangladesh wishes to start enjoying the benefits of low-cost renewable energy as much of the rest of the world is doing, the government’s ambitious wind and solar targets need to be locked into the new IEPMP.