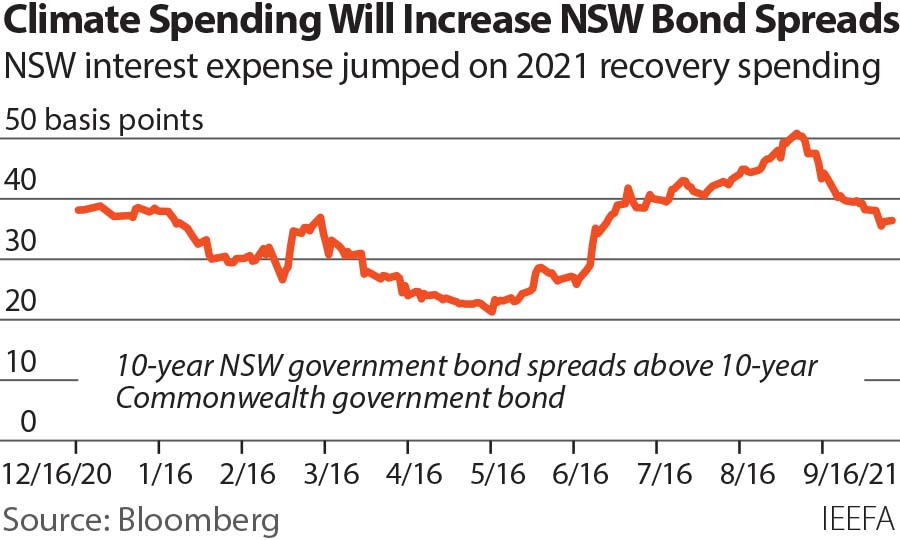 20 October 2021 (IEEFA Australia): Australia’s failure to commit to net zero targets or any credible climate policy is a growing economic threat to New South Wales and other states, argues a new report by the Institute of Energy Economics and Financial Analysis (IEEFA).

The Reserve Bank of Australia’s deputy governor Guy Debelle last week urged Australia to begin planning for the investment needed in the transition to zero carbon with Deloitte Access Economics determining the economic losses of doing nothing to mitigate the impacts of climate change would shrink Australia’s GDP by 6%, a $3.4 trillion loss in GDP in present value terms.

IEEFA’s report finds that Australia’s climate policies will have an extremely detrimental impact on the NSW economy. Report author and analyst Trista Rose says increased spending resulting from climate mitigation and damage from extreme weather events will push out debt levels. Couple that with declining coal royalties and continued reliance on high emitting fuels, the state’s net debt is estimated to reach 100% by 2060.

“The combined effect of drought, bushfires, floods and the first round of COVID-19 lockdowns have taken debt in NSW to unprecedented levels,” says Rose.

Debt in NSW is at unprecedented levels

“The bond market has reacted strongly, pushing out the cost NSW pays for its borrowing by 30 basis points representing $300 million per annum.

“Increased expenditure from climate mitigation will push out bond spreads, with the bond market’s reaction to NSW’s recent recovery spending evidence we will see more of the same.

IEEFA’s report also notes that Australia’s climate stance will inhibit access to cheap capital, drive the cost of capital higher, and could eventually send NSW (and other sub sovereigns) into a debt spiral.

NSW has relied heavily on offshore investors for funding requirements and, as foreign investors increasingly shun assets with high carbon exposure as the world commits to net zero, access to foreign capital is likely to become increasingly challenging.

Sovereign rating agencies have also signalled their impatience for regions and states not calculating in climate risk and the cost of transition.

“Considering the huge sums that credit ratings agencies have recently invested to ramp up their ESG offerings and the increased global focus on climate disclosures, climate risk will have a more considerable role in determining sovereign ratings in the future,” says Rose.

Sovereign downgrades are coming and inevitable

“The ratings agencies have issued strong warnings that sovereign downgrades are coming and inevitable.

“Decarbonising portfolios inevitably means shifting money away from assets with a high climate risk profile, materially impacting in this case the economic and fiscal outlook for NSW, and Australia in general.

“The Federal government’s failure to commit to net zero targets or any credible climate policy is a growing economic threat, federally and to the States.”

“Aside from these tangible costs, international investors’ perceptions of Australia and climate matter, and will inevitably have a material flow-on effect on the demand and liquidity of NSW Government bonds,” says Rose.