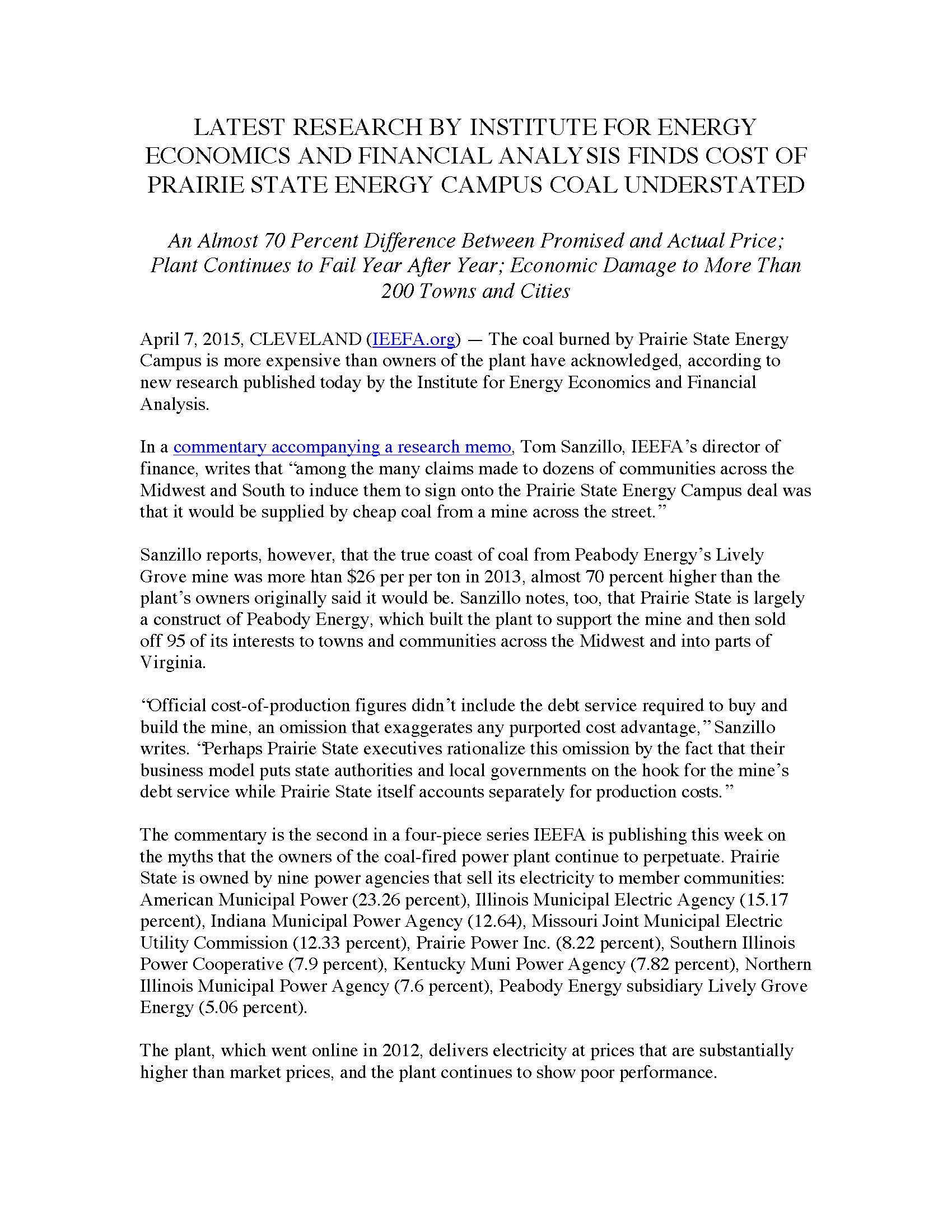 An Almost 70 Percent Difference Between Promised and Actual Price; Plant Continues to Fail Year After Year; Economic Damage to More Than 200 Towns and Cities

April 7, 2015, CLEVELAND (IEEFA.org) — The coal burned by Prairie State Energy Campus is more expensive than owners of the plant have acknowledged, according to new research published today by the Institute for Energy Economics and Financial Analysis.

In a commentary accompanying a research memo, Tom Sanzillo, IEEFA’s director of finance, writes that “among the many claims made to dozens of communities across the Midwest and South to induce them to sign onto the Prairie State Energy Campus deal was that it would be supplied by cheap coal from a mine across the street.”

Sanzillo reports, however, that the true coast of coal from Peabody Energy’s Lively Grove mine was more than $26 per per ton in 2013, almost 70 percent higher than the plant’s owners originally said it would be. Sanzillo notes, too, that Prairie State is largely a construct of Peabody Energy, which built the plant to support the mine and then sold off 95 of its interests to towns and communities across the Midwest and into parts of Virginia.

“Official cost-of-production figures didn’t include the debt service required to buy and build the mine, an omission that exaggerates any purported cost advantage,” Sanzillo writes. “Perhaps Prairie State executives rationalize this omission by the fact that their business model puts state authorities and local governments on the hook for the mine’s debt service while Prairie State itself accounts separately for production costs.”

The plant, which went online in 2012, delivers electricity at prices that are substantially higher than market prices, and the plant continues to show poor performance.

On Monday, IEEFA reported that Prairie State in 2014 continued for the third year in a row to fall short of the performance projections published by its owners.

On Wednesday, IEEFA will describe the geographic reach of the economic damage caused by the plant, which more than 200 towns and cities are contractually bound to support.

On Thursday, IEEFA will explain how Prairie State supporters are wrong in their insistence that ratepayers alone are responsible for the boondoggle and how the many lawyers, consultants, accountants and Wall Street firms who profited from the deal share responsibility in the failing plant.

(Part 3): A Crippling Burden to Its Many Towns and Cities

About IEEFA
The Institute for Energy Economics and Financial Analysis conducts research and analyses on financial and economic issues related to energy and the environment. The Institute’s mission is to accelerate the transition to a diverse, sustainable and profitable energy economy and to reduce.