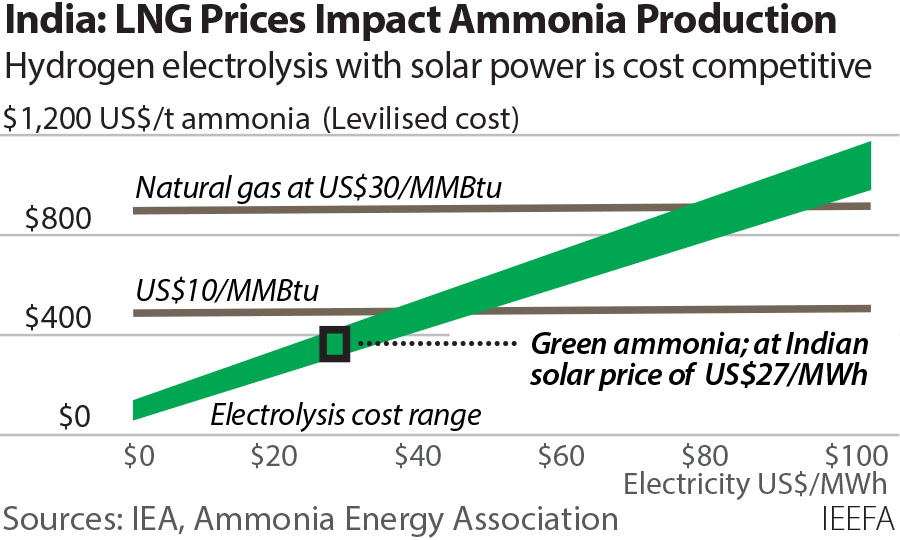 21 April 2022 (IEEFA India): A shift to green ammonia would significantly reduce the Indian government’s massive fertiliser subsidy burden and boost energy self-reliance by cutting dependence on imports of expensive liquified natural gas (LNG) for fertiliser manufacturing, according to a new report by the Institute for Energy Economics and Financial Analysis (IEEFA).

India’s fertiliser subsidy is budgeted at Rs1.05 trillion (US$14.2 billion) for 2022/23, the third year in a row it has exceeded 1 trillion rupees. But high and volatile global gas prices, exacerbated by the Russia-Ukraine war, have pushed fertiliser prices to record levels, making it likely that the subsidy will have to be increased drastically. 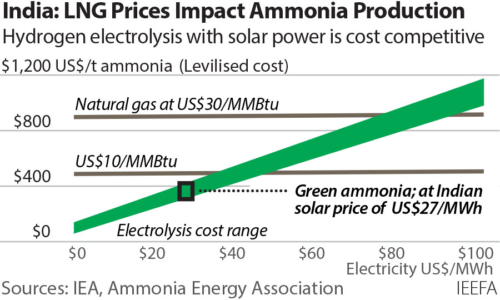 “Demand for fertiliser in India is expected to grow and this will increase the need for further subsidies and LNG imports unless we switch to a cleaner and domestically produced feedstock,” says report author Kashish Shah, energy finance analyst at IEEFA.

“Green hydrogen is produced from the electrolysis of water powered by renewable energy sources and can replace grey hydrogen, which is generated from natural gas, or methane, as a feedstock for ammonia production.”

Shah says demand for hydrogen in the Indian fertiliser industry is projected to rise from about 3MT per year today to 7.5MT by 2050.

There is 8MT of green hydrogen to green ammonia production capacity planned worldwide, according to the International Energy Agency’s (IEA) hydrogen project database.

The cost of green hydrogen production is currently about US$5.5 per kilogram, or US$3 per kilogram in countries with good solar resources and is projected to continue to decline steeply this decade, but to compete with grey hydrogen at US$2 per kg the costs of two critical inputs, electrolysers and renewable energy, must fall further.

“While the gap between the cost of producing green hydrogen and hydrogen from fossil fuels is narrowing, there is still further to go,” says Shah.

Making electrolysers in India, in tandem with the growing solar PV manufacturing base, would cut the cost of producing green hydrogen for green ammonia, says Shah.

Recently, Greenko Group subsidiary Greenko ZeroC and John Cockerill, a manufacturer of alkaline electrolysers in Belgium, signed an agreement to jointly set up India’s largest electrolyser Gigafactory. The companies say their targeted capacity of 2 gigawatts could replace 8% of the country’s LNG imports.

The government’s new green hydrogen policy offers a range of incentives to green hydrogen and green ammonia manufacturers, including allocation of land in renewable energy parks, waiving of interstate transmission charges for 25 years, and banking of renewable power for up to 30 days.

“These incentives mainly focus on the supply side,” says Shah. “In addition, developers and investors would need a strong offtake pipeline for their product to make the projects bankable. This could be done by implementing a green hydrogen consumption obligation (GHCO) mechanism for fertiliser production and petroleum refining, similar to Renewable Purchase Obligations (RPO).”

The report says the next phase of policy incentives could include production-linked incentives (PLI) similar to those provided for solar modules and battery manufacturing. This could bridge the viability gap for interested manufacturers that are ready to risk capital for green hydrogen and green ammonia projects.

The international green bonds market will be a key funding avenue for projects as developers look to derive value from the synergy of renewables and green hydrogen, the report says.