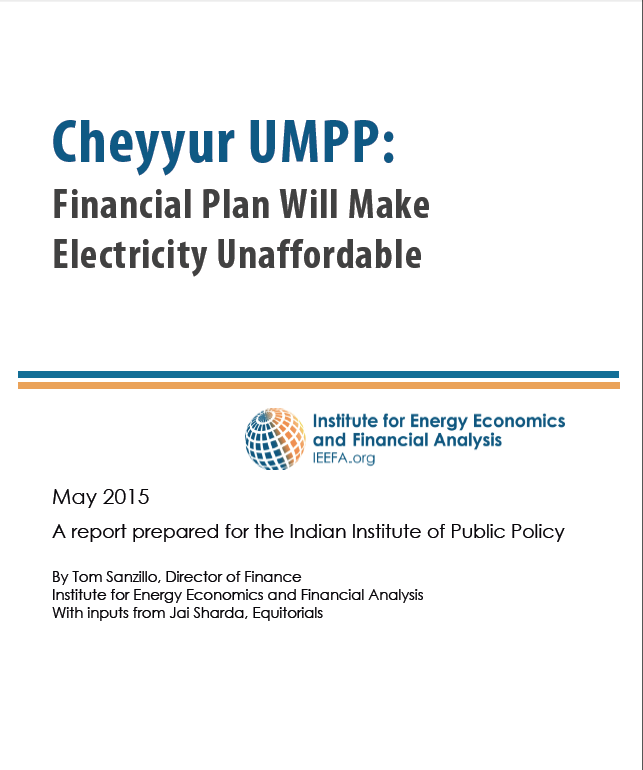 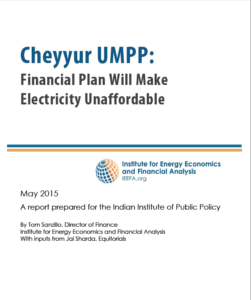 CLEVELAND, May 20, 2014 (IEEFA.org) — A report published today­­­ by the Institute for Energy Economics and Financial Analysis finds that the proposed 4,000-megawatt coal-fired Plant Cheyyur in Tamil Nadu, India, would require unacceptably high tariffs on customers.

The report, commissioned by the Indian Institute of Public Policy, concludes that the proposal to build Plant Cheyyur, an Ultra Mega Power Plant (UMPP), is financially unsound and that if it were to be built it would damage the region’s economy.

“The cost of the plant would place upward pressure on electricity prices in Tamil Nadu, a community already contending with an ailing utility and the problem of rising electricity costs,” said Tom Sanzillo, IEEFA’s director of finance and author of the report. “The Indian government’s public-policy goal of providing affordable electricity would be undermined.”

The report examines the Plant Cheyyur tariff scheme in detail. Among the findings:

Sanzillo said that while a recent reworking of bid documents around the project could make the project more attractive to investors, those adjustments would also make it even more financially fraught for consumers and cash-strapped utilities. “Any new program design must either pass along greater costs to the residential, industrial and agricultural users or necessitate greater governmental subsidies,” Sanzillo said.

He noted that the project is being developed under the assumption that it would require an annual 12 to 14 million tons of imported coal, a business model that would put its coal costs under current market conditions at more than what they would be if domestic coal were used.

“As proposed, Plant Cheyyur is not a financially viable proposition,” Sanzillo said.

IEEFA’s research was supported by Equitorials, an Indian energy-focused financial-analysis firm in Mumbai.