Rampal Coal-Fired Proposal for Bangladesh Puts Ratepayers and Investors at Risk, Relies on Outdated Technology, Is ‘Out of Step With Times’ 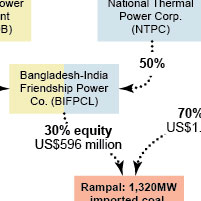 June 17, 2016 — The proposed coal-fired Rampal Power Plant in southwest Bangladesh would drive up electricity rates, cost far more than promoters say, and put investors at a myriad of risks, according to a report published today by the Institute for Energy Economics and Financial Analysis (IEEFA).

The report, Risky and Over-Subsidized: A Financial Analysis of the Rampal Power Plant,” by Jai Sharda, an IEEFA consultant and Tim Buckley, IEEFA’s director of Energy Finance Studies, Australia, concludes that the project should be cancelled and that Bangladesh would do better to invest in solar energy. 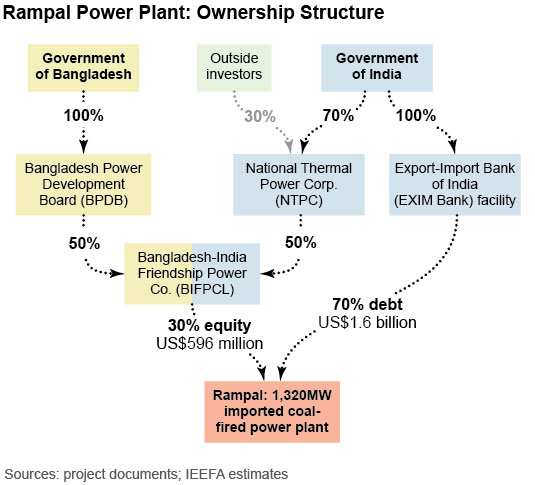 “The plant is fraught with unacceptable risk, out of step with the times, and would set Bangladesh back,” Sharda and Buckley said in the report, which describes how Rampal’s finances are made up largely of public subsidies channeled through intermediaries supported by the Bangladeshi and Indian government.

The report notes that the true nature of the proposal has not been well-publicized: “IEEFA suspects that the project is being promoted as a means to sell Indian coal to Bangladesh and as a way to skirt Indian policy against building a coal plant so near the Sundarbans, a protected forest and World Heritage Site.”

The report outlines core financial weaknesses in the proposal that include:

The study also sees risks presented by community opposition to the project and questions whether it would perform as advertised. It describes how Rampal’s reliance on imported coal would needlessly expose ratepayers to the vagaries of global coal markets and how the project would be an environmental hazard. The study questions the chosen site for the plant in the “wind risk zone” of Bangladesh and cites “the seeming lack of a contingency management plan.”

Rampal project backers and customers would also be exposed to potential loss of government subsidies if the Bangladesh government decides to not long fully support electricity-system losses as it does now.

The report concludes also that solar energy development is a superior choice because it is faster to deploy, cheaper, and has probabilities on its side that include: