New York – “New research by the Carbon Tracker Initiative (CTI) today identifies major financial risks for investors in coal producers around the world, from the domino effect of slowing demand growth in China, where thermal coal demand could peak as early as 2016.

CTI’s latest analysis highlights $112billion of future coal mine expansion and development that is excess to requirements under lower demand forecasts. In particular it shows that high cost new mines are not economic at today’s prices and are unlikely to generate returns for investors in the future. Companies most exposed to low coal demand are those developing new projects, focused on the export market. 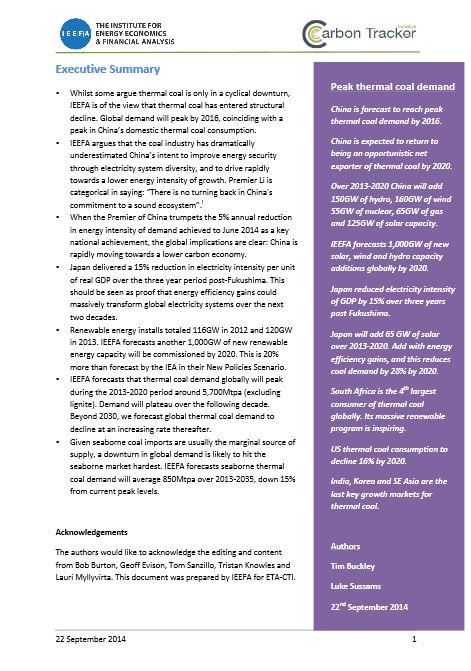 With new measures to cap coal use and restrict imports of low quality coal in China, it appears the tide is turning against the coal exporters. The Institute for Energy Economics and Financial Analysis (IEEFA)’s demand analysis shows how China’s coal demand could surprise people by peaking in 2016 and then decline gradually thereafter, driven by efficiency measures, increased renewables, hydro, gas and nuclear and tougher policies to cut air pollution.

China’s desire to reduce imports will cascade through the seaborne market, impacting prices and asset values for export mines in the US, Australia, Indonesia and South Africa. The rapid displacement of coal in the US domestic market has seen US producers try and switch to exporting, but that window is already starting to close.

The implication is that Chinese carbon dioxide emissions may peak before 2020, given that these emissions have historically tracked coal demand so closely. Such a peaking would send a powerful message that all countries can target strong, cleaner economic growth, reduce poverty and manage their carbon emissions at the same time.

“The world’s coal industry is playing musical chairs with demand – every time the music stops another piece of the market is being taken away.” James Leaton, Research Director, CTI.

“In addition to stalling global coal demand and moves to reduce coal-fired power in major export markets such as India and China, this report sends a further warning for Australian coal investments, especially thermal coal developments such as those in the Galilee Basin and NSW.” Tim Buckley, Lead Author and Director of Energy Finance Studies, Australasia, for the Institute for Energy Economics and Financial Analysis (IEEFA)

The European Union’s Energy Roadmap to 2050 and the US Environmental Protection Agency’s recent Clean Power Plan show that the construction of new coal plants will be severely constrained in Western markets. Meanwhile, the world’s biggest producer and consumer, China, has indicated a potential coal cap in its next five-year plan starting in 2016. And India has to overcome infrastructure and financial constraints if it wants to import greater volumes of coal. Coal producers around the world are relying on a flawed assumption of insatiable coal demand in China. The business model for coal looks on shaky ground without that demand.

CTI’s analysis shows that in a low demand scenario the seaborne coal market will account for an average of 850 million tonnes per year over the next 20 years. Such a scenario will require production only up to a breakeven price of $75/tonne. This means mines with costs higher than this will not provide investors with a decent level of return.*

‘We see a low demand scenario leading to a $75/tonne  peak break-even price for profitable new development in seaborne markets –companies and  investors need to understand their exposure to projects higher up the cost curve.’ Mark Fulton, Founder, ETA

“This report highlights that regardless of Australia’s energy policy decisions, the world is rapidly moving toward a lower emission energy system. This leaves Australia exposed to financial risk – a risk that is increasing as we continue to delay transition.” Nathan Fabian, Chief Executive of the Investor Group on Climate Change Australia/New Zealand.

The CTI analysis shows that some of the world’s biggest greenfield coal projects in Australia’s Galilee Basin are already out of the money under a low-demand scenario. In the US, the potential expansion of mines in the Powder River Basin also has challenging economics. These areas also require major investment in infrastructure to deliver production to the Pacific market, and new ports on the US West coast and adjacent to the Australian Great Barrier Reef have all faced opposition.

“The world is changing for the fossil fuel industry, especially the coal sector which is facing a shrinking demand window. Investors want assurances that capital is not being spent on high-cost, high-carbon projects that may not be competitive as global coal demand declines.” Mindy Lubber, President, Ceres

The report “Carbon supply cost curves: Evaluating financial risk to coal capital expenditures” will be launched at the Bloomberg offices in New York on 22nd September at 08:00 EDT.

The report will be accompanied by three more technical research papers on coal supply, demand and financial trends, produced in close collaboration with Energy Transition Advisors (ETA) and Institute of Economics and Financial Analysis (IEEFA).

The report will be available at: http://www.carbontracker.org/site/coalcostcurve

The underlying analysis in this report, prepared by CTI-ETA, is based on supply cost data licensed from the Global Economic Model of Wood Mackenzie Limited.  Wood Mackenzie is a Global leader in commercial intelligence for the energy, metals and mining industries.  They provide objective analysis on assets, companies and markets, giving clients the insights they need to make better strategic decisions.   The analysis presented and the opinions expressed in this report are solely those of CTI-ETA. Wood Mackenzie data was analysed by Energy Economics.

Our research to date on unburnable carbon and stranded assets has started a new debate on how to alight the financial system with the energy transition to a low carbon future. This latest research series aims to explore in more detail the capital expenditure plans of the coal, oil and gas sectors.

“In addition to stalling global coal demand and moves to reduce coal-fired power in major export markets such as India and China, this report sends a further warning for Australian coal investments, especially thermal coal developments such as those in the Galilee Basin and NSW.”

The conclusion of the report’s rigorous global financial modelling forecasts a long-term equilibrium coal price of $75USD per tonne.

“Despite wholesale electricity prices down at decade lows, Australian retail power prices are at record highs, in the top quartile of power prices globally.

“The failure of successive Australian governments to respond to changing energy markets has resulted in massive overinvestment in the grid infrastructure and hence some of the highest retail electricity prices in the world. When we place Australia in a global context, the data demonstrates that government resistance to changing market conditions has played a major part in this problem.

“Goldplating of the grid on the assumption of continued electricity demand growth has meant that distribution and other tax costs are now more than 70% of the retail price of electricity.

“Meanwhile, analysts are forecasting demand will continue to decline going forward. In line with general rules of economics, the Australian market has responded to high and rapidly increasing power prices with falling energy demand, showing the 2nd highest reduction of demand for any major market for the period 2005-2014.

“Energy market analysts forecast these regressive policies will backfire, as high electricity prices will push Australia to a tipping point where consumers will implement energy efficiency measures and move toward a low carbon system with increasing focus on distributed solar with storage into 2018. In contrast to downward trends in coal energy use and demand, we’re seeing the rise of renewables in spite of hostile policy conditions. Distributed solar with storage will prove competitive and boom late this decade even without subsidies.

“In the context of global energy markets, Australia emerges as a case study in what not to do if you want to sustainably protect retail consumers and ensure long-term energy security. Countries such as China are doing the opposite – regulating to reduce dependence on coal energy, reducing air pollution and carbon emissions, diversifying the energy mix and encouraging the rise of renewables, a smart grid and energy efficiency.