18 January, 2016: China reports electricity demand grew just 0.5% year on year (yoy) to 5,550TWh in calendar 2015,[i] the slowest rate of growth since 1998. With a significant increase in non-thermal electricity generation (nuclear, hydro, wind and solar), coal fired power generation declined by an estimated 4% yoy and coal consumption is estimated to have fallen 5% yoy, building on the decline reported in 2014.

“With the collapse in both Indian (down 34% yoy)[iii] and Chinese (down 35% yoy) coal imports in December 2015, the seaborne thermal coal industry is entirely beleaguered,” said Tim Buckley, Director of Energy Finance Studies at the Institute for Energy Economics and Financial Analysis (IEEFA).

“This telling import data confirms the last flicker of hope has been snuffed out, not least for Australia’s Galilee Basin. It also carries massive negative implications for Indonesia’s coal export market, given the concurrent collapse in Indian demand” he said.

“The decoupling of economic growth and electricity demand is a key driver of the Chinese energy transformation and is being witnessed first hand,” said Mr Buckley.

This data underlines a significant decline of total coal consumption in China, with IEEFA estimating a reduction of 5% yoy in volume terms, an acceleration on the 2.9% yoy decline in coal consumption reported for 2014.

The NEA confirmed the evidence that has been consistently reported over 2015 that China is successfully diversifying away from thermal power generation at a far-faster than expected rate. Wind, solar, hydro and nuclear continue to gain share at coal’s expense, consistent with the trend evident since 2011.

Thermal power capacity utilisation fell by 9% yoy from 54.1% in 2014 to only 49.4% in 2015, the lowest on record and the first time utilization has fallen below 50%, as an absurd 64GW or more of effectively idle thermal power generating capacity was added.

IEEFA forecasts that China will install an additional 24 gigawatts (GW) of wind, 16GW of new hydro, 6GW of nuclear and a new record of 18GW of solar (60% utility scale, 40% distributed rooftop solar) in 2016. With the economic transition continuing, electricity demand is forecast to grow only 3-4% yoy in 2016; this 64GW of additional zero carbon electricity capacity will be more than sufficient to meet total demand growth.

The Chinese Coal Association and National Energy Administration likewise both forecast a further decline in 2016.[vi] The third straight year of decline, again reinforcing that peak coal was passed in 2013.[vii]

Consistent with this, at the end of 2015, the head of China’s National Energy Agency made another significant announcement: China will not approve any new coal mine projects for the next three years and will close down a thousand small mines.[viii]

“The implications of these changes are huge: China’s total country emissions are on track to peak potentially a decade earlier than their official target of no later than 2030.

“This comes at the same time that America has confirmed a 10% year-on-year decline in coal consumption in 2015[ix] (and down a staggering 29.7% yoy to-date in early 2016[x]), plus a three year moratorium of new Federal coal mine leases.[xi]

“The U.S. has also announced a major new policy to end the US$30 billion taxpayer subsidisation of the U.S. coal mining sector by ending non-competitive coal lease tenders, a situation that has gone unchecked for three decades,” he said.

The transformation of the Chinese electricity market combines with significant policy momentum towards lower carbon intensive growth in America. At the same time, India is pursuing a program to install 175GW of renewable energy by 2021/22 and rapidly improve grid efficiency.

“That the three largest economies globally are all moving rapidly in concert to exceed the COP21 Paris agreement sets a very positive scene for 2016,” said Buckley.

Bloomberg New Energy Finance has this week reported that China’s new investment in renewable energy and energy efficiency rose 17% yoy to a record US$110bn in 2015.[xii] This was almost double the U.S. spend of US$56 billion (itself up 8% yoy).

“The net economic and social benefit of this electricity market transformation is abundantly clear.

“The International Renewable Energy Agency (IRENA) on Saturday released new calculations that the macroeconomic impact of doubling the use of renewable energy by 2030 would lead to a 1.1% increase in global GDP. This equates to an economic boost of US$1.3 trillion,” Mr Buckley said.

As detailed in Figure 1, IEEFA forecasts a 30% decline in global traded thermal coal demand by 2021 relative to 2015 levels. Declining demand in each of the three largest import markets – China, Japan and now also India – overrides growth in the rest of Asia. 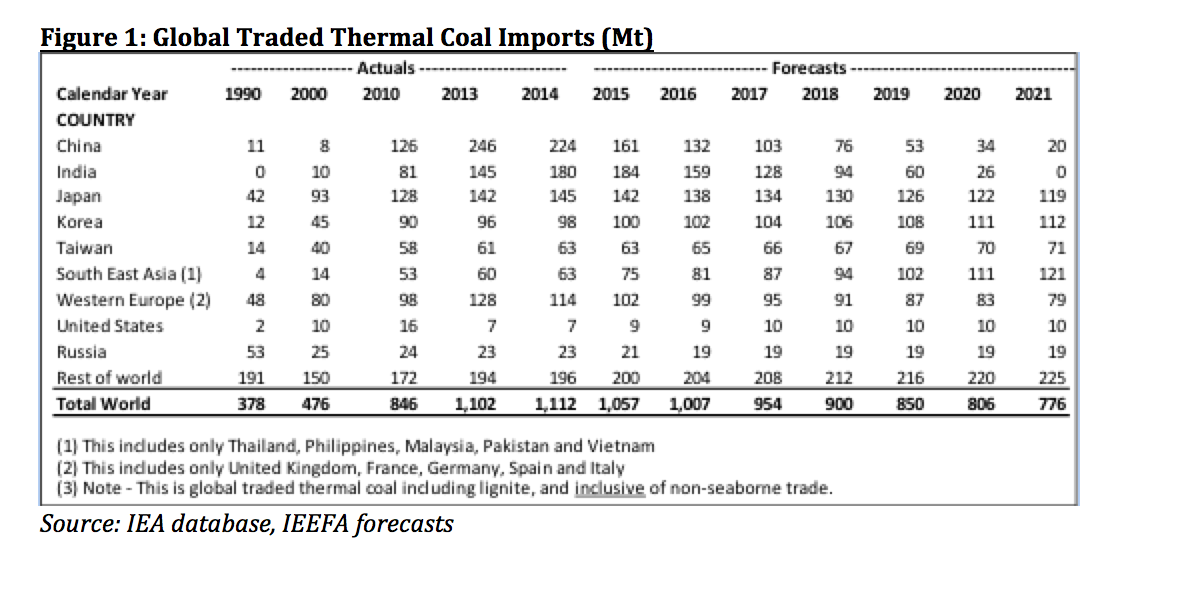 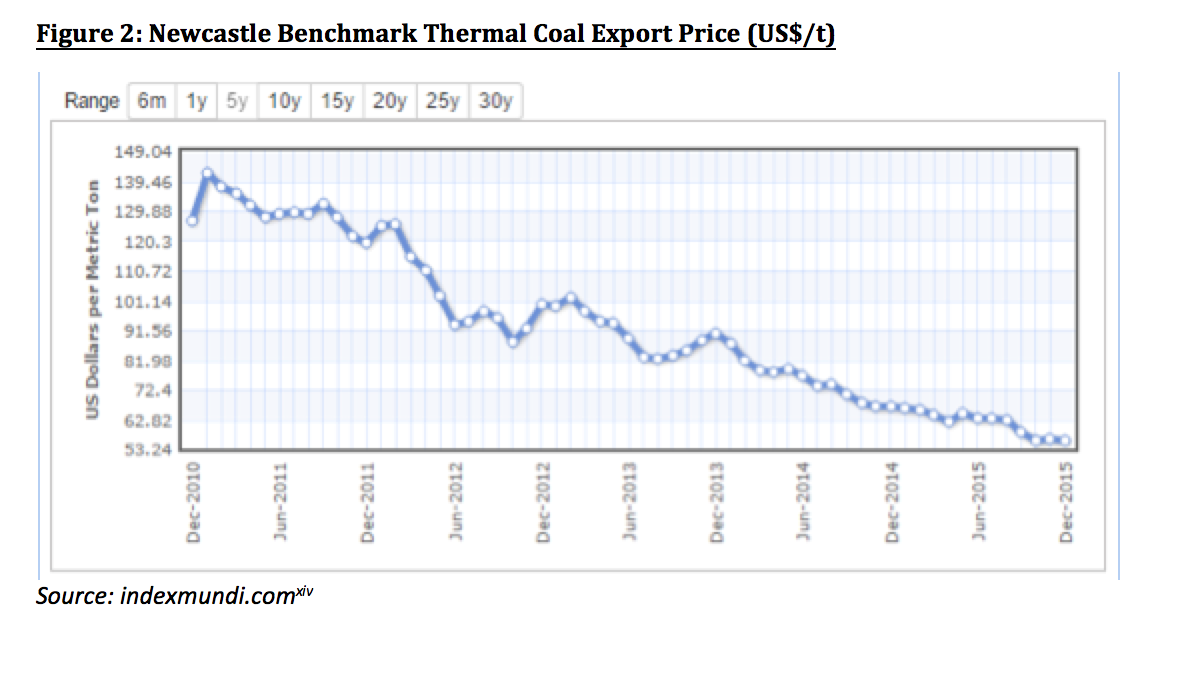 As detailed in Figure 2, Newcastle export grade thermal coal prices of US$51/t in January 2016 were down almost 30% over 2015 and down 60% from the 2010/11 peak. The Newcastle coal futures price shows a further decline to US$43/t by October 2021,[i] showing the market is increasingly pricing in a permanent structural decline.