IEEFA U.S.: Tax reform in Louisiana has resulted in millions of dollars back into local communities 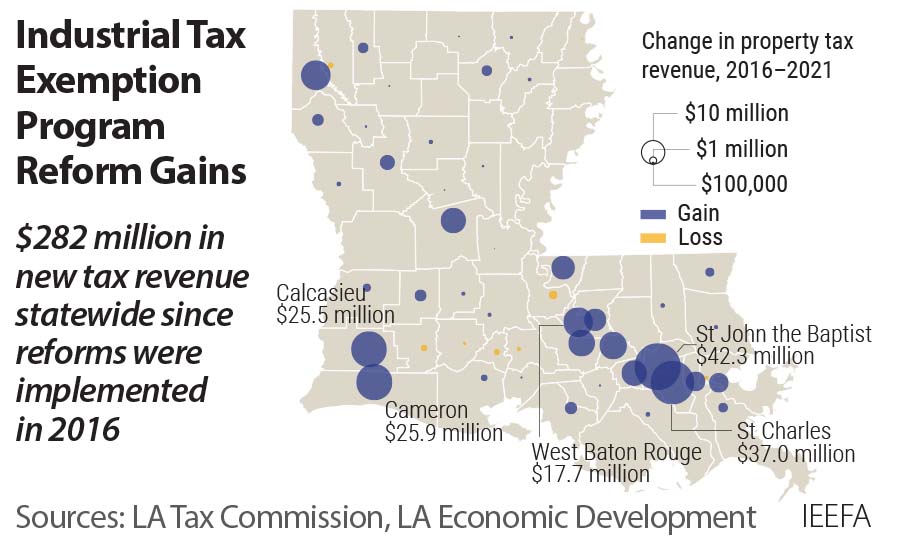 Reforms increased annual industry property tax revenue by more than $280 million between 2016 and 2021.

Annual revenues of $113 million for schools, $55 million for law enforcement, and $115 million for other parish services have been generated by the reforms.

October 11, 2022 (IEEFA) — Reforms to Louisiana’s Industrial Tax Exemption Program (ITEP) have brought more than $16 billion of industrial manufacturing property back onto the tax rolls and resulted in an annual industrial property tax revenue increase of more than $280 million, according to a new Institute for Energy Economics and Financial Analysis (IEEFA) report.

The report’s findings show that the highest-impact component of ITEP reforms made in 2016 has been the implementation of a local approval process over corporate tax exemptions, and underscores the need to make the reforms permanent.

The Louisiana program was long recognized as one of the most generous state-level industrial subsidies in the country. Before 2016, applications for tax exemptions were decided by a state-level board with no input from the local jurisdictions whose tax revenues would be directly impacted. In 2016, Louisiana Gov. John Bel Edwards issued two executive orders to reform the ITEP program, based on the recognition that ITEP was costing local governments substantial revenue without making the state more competitive in attracting industry.

The reforms reduced the total value of the possible tax exemption, introduced a job creation provision, and required that applications be approved by the local government bodies whose tax revenues were in question.

“The most important aspect of the 2016 reforms, in terms of revenue generation, has been the requirement that companies justify their applications before the local governing bodies whose revenues would be impacted,” said Tom Sanzillo, IEEFA director of financial analysis and co-author of the report. “This reform program was created by community leaders and it has dramatically changed the behavior of corporations. The number of applications are down and new subsidies are targeting new facilities.”

The IEEFA report’s findings include:

“For 80 years Louisiana was the only place in the country that gave an unelected state-level board the authority to give away local communities’ tax revenue without the approval of local officials,” said Dr. Theron Jackson, a leader with Together Louisiana, a citizens' group that advocated for the reforms. “This study shows how destructive that practice was to local tax bases. Restoring local control has brought a lot more sanity to how we deal with tax incentives and a lot more money to our schools and services.”