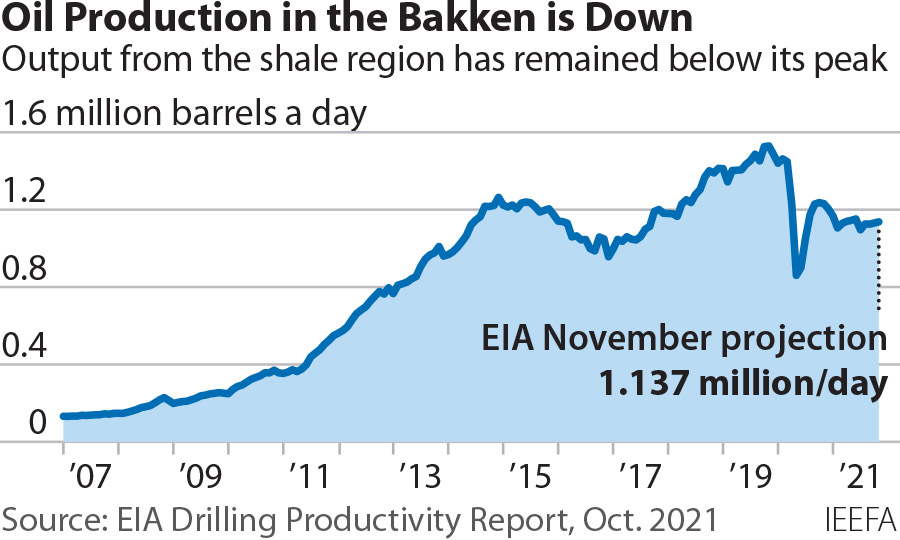 November 3, 2021 (IEEFA) — A shortage of high-quality drilling sites poses a long-term risk to oil production in the Bakken formation, according to an analysis by the Institute for Energy Economics and Financial Analysis (IEEFA). “As the Bakken oil industry depletes its remaining inventory of top-tier wells, it will have no choice but to shift drilling to less-productive areas,” said Clark Williams-Derry, an IEEFA energy finance analyst and lead author of the report. “The new wells will produce less oil and gas, and will require steadily higher prices to justify the roughly $7 million price tag to drill and complete a Bakken well.”

The decline in high-caliber wells carries major fiscal, financial and policy implications. Investors will have to temper expectations. State and local budgets will lose oil and gas revenues. Regulators will need to reconsider the economic rationale for existing pipelines, including the controversial Dakota Access Pipeline (DAPL).

“If recent production declines continue, the pipeline’s capacity could become superfluous,” said Williams-Derry. “Given the significant surplus of pipeline capacity, even modest declines in production could allow the region to handle its crude production without DAPL.”

The dwindling number of top-tier wells is highlighted by the sharp decline in the region’s supply of drilled-but-uncompleted (DUC) wells. Since June 2020, the industry has reduced its DUC inventory by about 40 percent; IEEFA estimates the Bakken, which had almost 900 DUC wells in June 2020, now has roughly 350 DUCs that could be classified as top-tier wells.

“Today’s high oil prices support current drilling levels in the Bakken, but long-term prices are unpredictable,” according to Williams-Derry. “Yet one thing is certain: The Bakken will progressively exhaust its best remaining drilling prospects. As that happens, the quality and productivity of new wells will decline, and the economics of Bakken oil production will face new and growing challenges.”

Full Report: Has the Bakken Peaked?