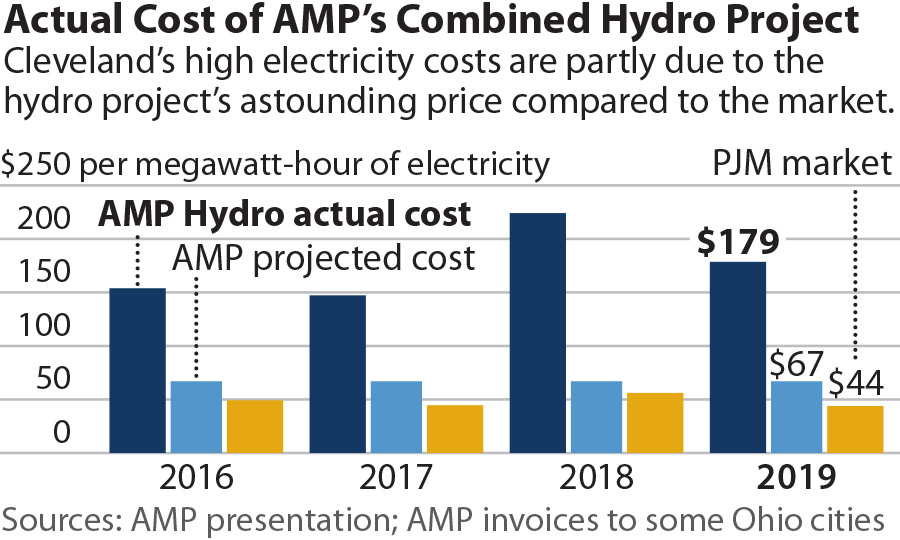 September 11, 2020 (IEEFA) — Long-term contracts with American Municipal Power (AMP) have been “a financial disaster” for Cleveland Public Power (CPP) customers, according to a briefing note released today by the Institute for Energy Economics and Financial Analysis (IEEFA). 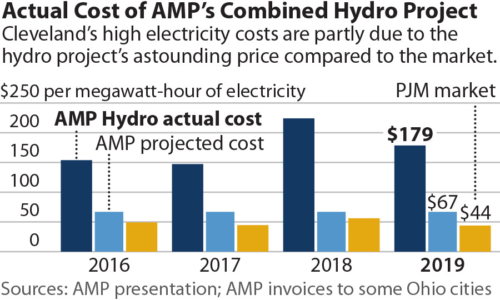 About 70% of CPP’s expenditures for its total power supply are paid to AMP, an organization that  includes 134 municipal utilities and a joint action agency in nine states. Two major 50-year contracts—with the Prairie State coal-fired plant in Illinois and the AMP Combined Hydro Project on the Ohio River—stand out as particularly bad deals. The two contracts have cost CPP ratepayers $106 million more for power than customers would have paid if CPP instead had bought the electricity from regional wholesale markets.

“The electricity that Cleveland Public Power gets from the Prairie State and Combined Hydro Project is very expensive compared to buying the same power from PJM or the competitive market,” said David Schlissel, the study’s author, “and ratepayers are unlikely to find relief any time soon. It’s surprising that no one has yet sued AMP for mismanaging these coal and hydro projects.”

Cleveland Public Power has come under increasing scrutiny in recent weeks, as public attention has been focused on the findings of a year-old report that has just come to light.  The New Gen Strategies report outlines a series of problems at the utility, ranging from its rates—which are now 13% higher than its direct competitor, FirstEnergy—to transmission and maintenance failures. The administration of Mayor Frank Jackson recently provided the city council with a redacted version of the report but has refused to release a complete copy.

According to the IEEFA report, the trouble for CPP ratepayers began in the mid-2000s, when AMP began building its own power plants, financed with multi-billion-dollar bond deals. AMP studies predicted that the costs of power from Prairie State and the Combined Hydro Project would be stable and cheaper than purchasing electricity from competitive wholesale markets.

The average cost of purchasing power from Prairie State, however, stood last year at $60.97 per megawatt-hour (MWh), much higher than the $50.26/MWh estimate that AMP provided to Cleveland City Council in 2007 and almost double the $33.49/MWh price for purchase from the wholesale markets.

The Combined Hydro Project has been an even worse deal. The average 2019 price for CPP customers was $178.58/MWh, almost triple the $67/MWh estimate provided in 2007 and quadruple the $43.93 cost for purchasing electricity from the wholesale markets.

Costs have escalated for three predictable reasons. Cost overruns have plagued both plants. The Prairie State facility, which was originally predicted to cost $4 billion, wound up with a $5 billion price tag. The Combined Hydro Project was budgeted at $4,360 per kilowatt (kW) in 2007; actual costs soared to more than $10,800/kW.

The projects also have not produced as much power as had been projected. AMP said Prairie State would produce 11.8 million MWh annually between 2012 and 2019. Instead, it has averaged only 9.6 million MWh per year. The Combined Hydro Project also has fallen short of estimated production.

Finally, both projects suffered delays in construction. Prairie State’s completion took an extra six to 12 months, and the Combined Hydro Project was delayed at least two to three years.