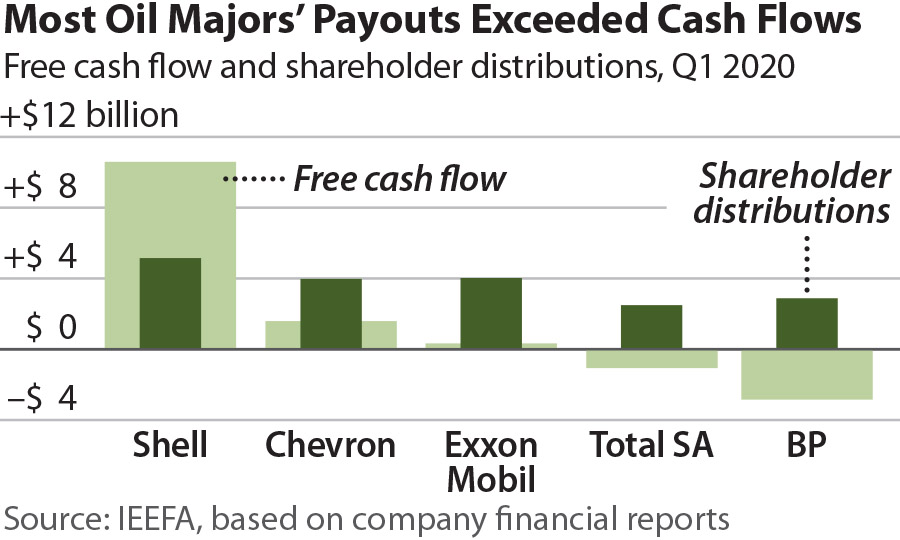 May 26, 2020 (IEEFA) — Four of the world’s five largest oil and gas companies spent more cash on dividends and share buybacks during the first quarter of the year than they generated from their core business operations, according to a briefing note released today by the Institute for Energy Economics and Financial Analysis (IEEFA). 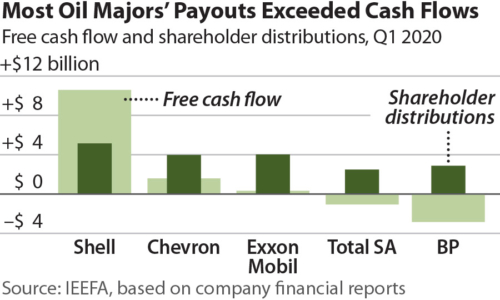 The analysis found that the five oil and gas supermajors collectively paid out $18.5 billion in dividends and buybacks during the quarter, while generating only $8.6 billion in free cash flows. The companies covered the $9.9 billion shortfall with other sources of cash, including borrowing, asset sales, and drawdowns of cash reserves.

The IEEFA analysis found that the five supermajors—ExxonMobil, Chevron, Shell, BP and Total SA—have been spending beyond their means for much of the past decade. Together, the companies generated cumulative free cash flows of $340 billion from the beginning of 2010 through the end of 2019, while spending $556 billion on dividends and buybacks, resulting in a net deficit of $216 billion.

“In this environment, oil and gas majors now face a troubling choice: They can cut dividends to avoid taking on new debt or they can borrow money to sustain short-term shareholder distributions, while potentially weakening their long-term finances,” said co-author Kathy Hipple.

Briefing Note: In Q1, Four of Five Oil Majors Paid More Cash than They Made from Operations