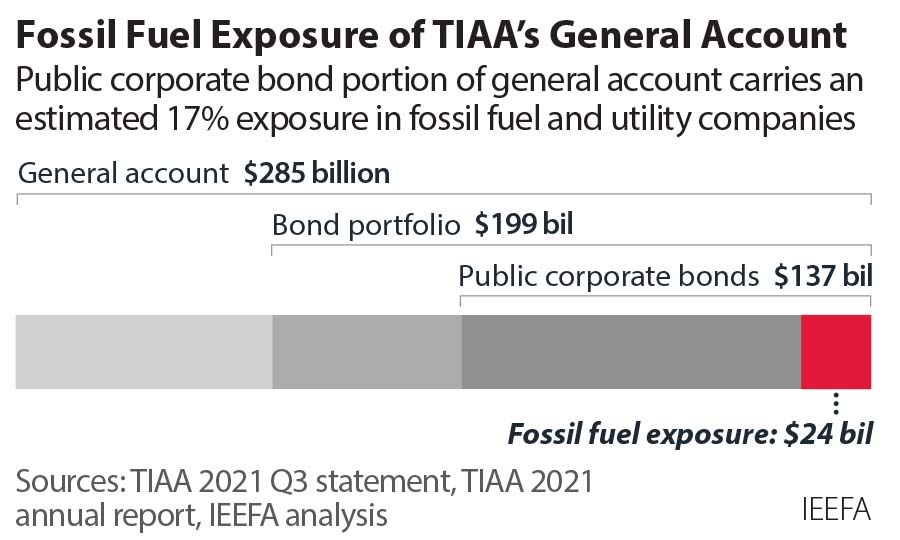 Faculty senates, TIAA’s major customers and individual members are appealing to TIAA for action that more closely addresses the risk

IEEFA’s roadmap suggests a path that is achievable and practical

The financial case for fossil fuel divestment is strong, yet TIAA dismissed it as a necessary building block to a meaningful climate change plan

November 16, 2022 (IEEFA)—The climate action plan issued by the Teachers Insurance and Annuity Association of America (TIAA) displays disappointing ambition and is misaligned with industry standards and appeals from its climate-aware customer base, according to a new Institute for Energy Economics and Financial Analysis (IEEFA) report, TIAA Fails Clients on Climate.

Despite the plan’s shortcomings, decisive guidance from TIAA’s board and a comprehensive climate strategy would position the company as a climate leader. IEEFA’s report is a roadmap for a sustainable and profitable way forward to a fossil free portfolio.

TIAA manages a diversified investment portfolio of $1.4 trillion on behalf of educational, cultural, health and social service professionals, a constituency that is increasingly alarmed by accelerating global climate change. The company’s climate action plan prioritizes only a small segment of its portfolio for immediate review and action.

“TIAA has promised a fully developed net-zero plan for its assets under management, but the scope it has proposed for its first round is small and lags basic industry standards that address climate change,” said Tom Sanzillo, IEEFA director of financial analysis and author of the report. “Our initial review of the numbers suggests there is significant carbon exposure in each major asset class under management.”

The report also raises concerns with the policy orientation of TIAA. Many major financial services companies, including insurance companies like TIAA, have fossil fuel divestment or exclusion policies. Such policies are considered best practice by industry leaders and insurance regulators, who increasingly expect due consideration of fossil fuel divestment as a component of any climate action plan. TIAA’s failure to consider divestment as a mechanism to protect its portfolio is a striking lapse in its fiduciary obligations.

“TIAA has stated that climate risk is financial risk. We agree,” Sanzillo said. “But part of risk analysis is doing something about it. To foreclose the divestment option leaves TIAA very little room to achieve a net-zero portfolio. The policy approach lacks thoughtful planning, which is the foundation of investment due diligence. TIAA’s customer base is more attuned than most employee funds to the issue of climate change. A weak climate plan puts at risk the trust and confidence that its customers have placed in TIAA’s directors and management.”

The financial case for fossil fuel divestment is strong. For most of the last decade, fossil fuel stocks clustered at the bottom of the market, overproducing and following an outmoded business model that exposed them to price volatility. TIAA has a tremendous opportunity to lead with its climate action plan by promptly evaluating how to achieve its financial targets with a fossil-free portfolio.