Each year the International Energy Agency (IEA), an independent intergovernmental organisation releases the World Energy Outlook (WEO) which among other things, models global energy demand using various scenarios. The scenarios are not predictions, rather tools to assess risks.

The scenarios, briefly explained in a new IEEFA fact sheet , respond to global Paris Agreement targets entered into in 2016 which aim at keeping global temperature rises to well below 2°C while collectively pursuing efforts to limit increases to 1.5°C.

The UN Intergovernmental Panel on Climate Change has since indicated that even 2°C of warming is very dangerous.

While some governments around the world continue to lag, over 100 globally significant financial institutions including public and private banks, credit agencies and insurance groups have restricted coal financing to reflect Paris Agreement commitments, including 40% of the top 40 global banks and 20 globally significant insurers.

Indeed, since the start of 2018 there have been 34 new or significantly improved announcements from global financial institutions restricting coal.

The majority of institution’s announcements have burst forth as ‘climate’ policies demonstrating both determined and forthright acceptance of climate science, and a serious reorientation of business strategies in an attempt to align with the more challenging of IEA’s scenarios – the Sustainable Development Scenario.

IEEFA sees the IEA’s Sustainable Development Scenario as the most likely reflection of the world’s energy future.

The Sustainable Development Scenario presents a realistic, desirable scenario in terms of human and global safety whereby nations work together to successfully limit climate change by transforming the energy market.

“The IEA’s Sustainable Development Scenario offers a pathway to meeting various climate, air quality and universal access goals in an integrated way. In this scenario, global energy-related CO2 emissions peak around 2020 and then enter a steep and sustained decline, fully in line with the trajectory required to achieve the objectives of the Paris Agreement on climate change.” World Energy Outlook 2018

Although suggesting alignment with the Paris targets, the Sustainable Development Scenario – having a similar emissions profile to the IEA’s Copenhagen-era 450 Scenario (450S), gives only a 50% chance of maintaining warming below 2°C. (See Figure 1) 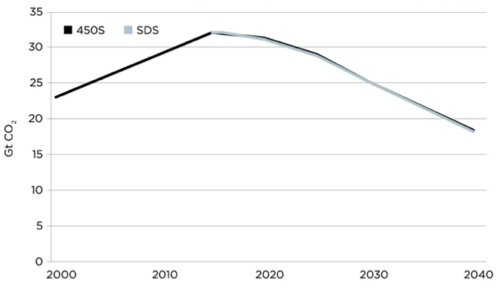 While the Beyond 2°C Scenario sets out a rapid decarbonisation pathway to achieve net-zero emissions by 2060 with only a 50% chance of limiting average future temperature increases to 1.75°C, the Sustainable Development Scenario falls well short of providing a clear energy pathway to meeting the Paris Agreement’s target of well below 2°C with any certainty.

Indeed, adding to this degree of uncertainty, the Sustainable Development Scenario also holds a presumption that coal carbon capture and storage (CCS) will be commercialised at scale by 2030. IEEFA sees this as an improbable assumption absent a significant global price on carbon emissions. Current coal-power CCS trials suggest in practice it would make operating coal-fired power plants too expensive. The IEA has yet to model the SDS if the presumption of CCS is dropped.

With global financial institutions currently announcing their exit from coal on average every two weeks, the momentum towards achieving the Paris commitments is palpable.

Institutions and governments need direction to set the energy system in the right direction and achieve the Paris goals.

IEEFA recommends additional modelling be undertaken by the IEA to further assist global institutions and governments better align their climate policies with a Sustainable Development Scenario that strictly adheres to the necessary liveable target of well below 2°C or limiting increases to 1.5°C.