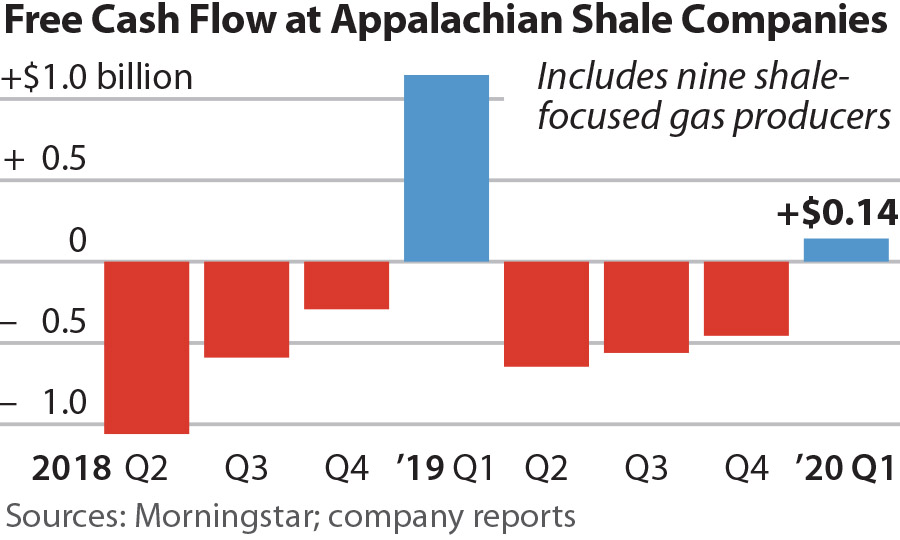 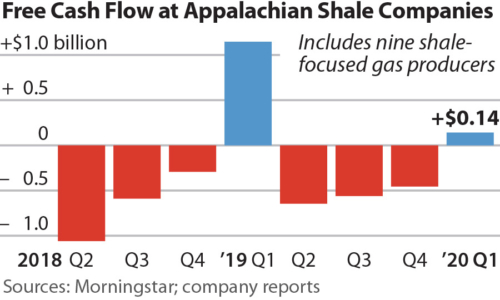 June 25, 2020 (IEEFA)—Nine fracking-focused gas companies in Appalachia reported a positive free cash flow during the first quarter of 2020—but only after slashing capital expenditures and reporting significant revenues from financial hedging, according to a new study by the Institute for Energy Economics and Financial Analysis (IEEFA).

The positive first quarter results, however, didn’t occur because of improvement in the economics of the natural gas industry. Instead, the nine companies have benefited from financial hedging strategies and reductions in capital expenditures. The first quarter results also didn’t offset negative cash flows over the past 12-month period, when the fracking companies spent $1.52 billion more on drilling and other capital expenditures than they earned from their core business operations.

Free cash flow, defined as the amount of cash generated by core business minus capital spending, is a critical gauge of corporate health. The nine companies spent $2.07 billion on capital projects during the quarter, a steep reduction from the $2.9 billion quarterly average since mid-2017. The Appalachian fracking companies also benefited from hedging strategies that kept them from collectively falling into negative free cash flow territory. CNX, for example, reported gains of more than $150 million from derivatives, more than half of its $267 million cash flow from operations during the first quarter of the year.

“Looking ahead, Appalachian frackers’ financial distress seems far from over,” said Kathy Hipple, IEEFA financial analyst and author of the report. “Improving cash flows were fueled largely by reductions in capex and gains from hedging. The industry may attempt to boost its cash performance by cutting spending to the bone. Yet capex cuts, in turn, will send clear powerful signals to investors that North America’s shale gas producers are not eager to boost production at current gas prices—meaning that the industry is poised to shrink rather than grow.”

The industry has been hit hard recently by factors that include falling international demand for liquefied natural gas (LNG) shipments, more competitive prices from renewable energy sources such as solar and wind power, and a pandemic-spawned recession. The recent challenges, however, pale in comparison to long-term issues that the gas industry has battled for more than a decade.

The rapid growth of production from the fracking revolution in the Permian, Marcellus and Utica basins has flooded North American markets and caused prices to plunge sharply from an annual average of $8.86/MMBtu in 2008 to less than $4.50/MMBtu in every subsequent year. Natural gas has become so abundant that Texas oil producers burned a record $749.9 million in 2018 by flaring or venting their unwanted gas, according to a recent IEEFA study.

As production has risen and prices have fallen, at least 11 Appalachian gas producers have filed for bankruptcy protection during the last five years, and two of the nine companies from the study (Chesapeake Energy and Gulfport Energy) recently sought restructuring advisors.

“The shale revolution has propelled the U.S. into the globe’s most prolific gas producer,” said Hipple. “Yet in financial terms, the gas production boom has been an unmitigated financial bust.”