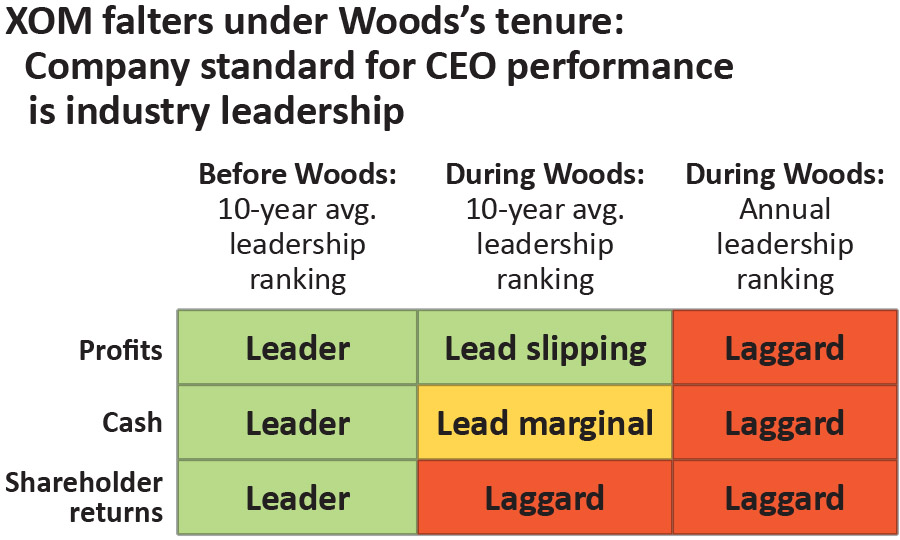 October 28, 2020 (IEEFA) — A close look at ExxonMobil’s financial performance metrics compared with its peers reveals significant slippage during Chairman & CEO Darren Woods’s tenure (2017-2019) even before the coronavirus pandemic, according to a briefing note released today by the Institute for Energy Economics and Financial Analysis (IEEFA).

“These are largely metrics devised by ExxonMobil, interpreted by ExxonMobil, and used to compare ExxonMobil to its peers,” said Tom Sanzillo, IEEFA director of finance and report co‑author. “Investors will often stick with a venerable company during turbulent times. Win, lose, or draw, investors require plainspoken, clear explanations. ExxonMobil’s management has a way to go in this area and the Board has some tough decisions about its leadership and who is at the helm.”

The company acknowledges that shareholder returns have lagged its competitors since 2017. The company’s stock has fallen from almost $91 per share in early 2017 to $70 by the end of December 2019. (By October 2020, the price was in the low $30s). The company has fallen out of the top 10 of the S&P 500, and it was dropped entirely this year from the Dow Jones Industrial Average.

There is no standard measure of ExxonMobil’s profit or ROCE calculation. Here, ExxonMobil calculates its own figure and then calculates one for peers, even though they report their own version. For example, ExxonMobil’s data shows that Total had a 10-year ROCE of 7.8% at the end of 2019; the French oil giant’s annual ROCE averaged over ten years however, is 12%. By its own account, ExxonMobil still leads its peers with a 14.1 percent ROCE average over the last decade, but its leadership position is more or less secure depending upon which calculation is used.

Likewise, the company’s cash flow (CFOAS) calculations appear to be misleading. Although ExxonMobil claims to also lead its peers in this area, an IEEFA review of Shell’s self-reported cash amounts indicates that Shell’s 10-year CFOAS average is slightly above ExxonMobil’s average. While calculating CFOAS appears to be a straightforward process, ExxonMobil doesn’t disclose how it arrives at the figure, and attempts to replicate the company’s CFOAS averages proved challenging for IEEFA’s researchers.

“ExxonMobil management would better serve its shareholders if it overhauled these flawed evaluation tools,” said Kathy Hipple, an IEEFA financial analyst and co-author of the report. “Improved transparency cannot improve actual financial performance, but it can help investors know whether the company is succeeding, failing or just bumbling through.”