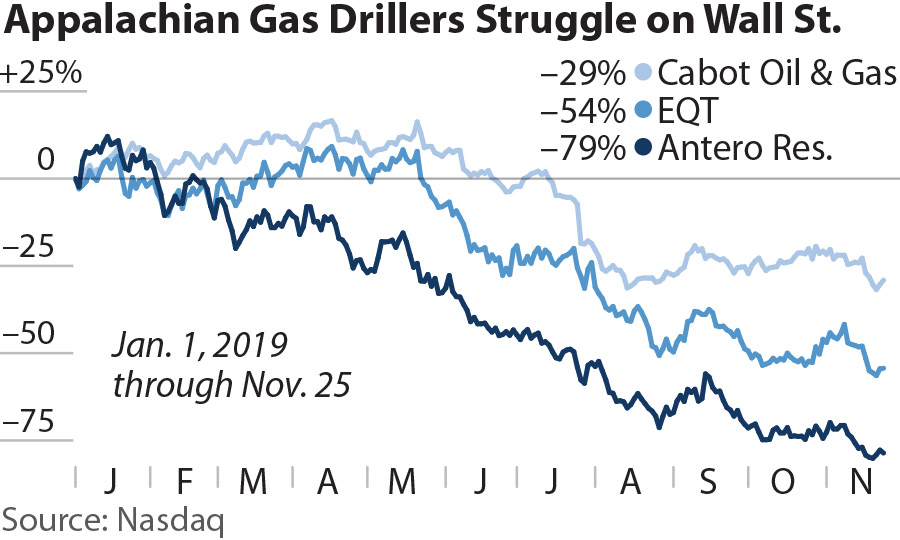 November 26, 2019 (IEEFA U.S.) ‒ Faced with persistently low natural gas prices, exploration and production (E&P) companies with operations in Appalachia continued to struggle financially in the third quarter of 2019. An IEEFA analysis reveals that seven of Appalachia’s largest producers collectively spent half a billion dollars more on drilling than they realized by selling oil and gas last quarter. 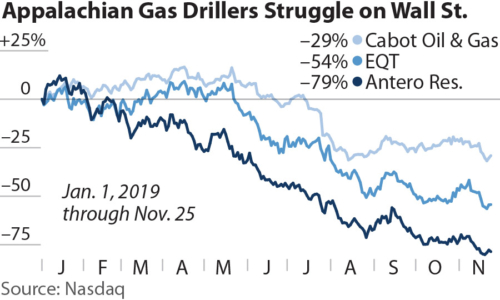 Appalachian natural gas companies use unconventional techniques (hydraulic fracturing, or fracking) that have propelled the U.S. to become the world’s largest producer of natural gas. Much of the domestic production is from Appalachia, primarily from the Marcellus and Utica shale basins.

“But production growth has not led to financial success,” said Kathy Hipple, an IEEFA financial analyst and co-author of the report. “Despite booming output, Appalachian oil and gas companies have consistently failed to produce positive cash flow for the past five quarters straight.”

With prices of gas averaging $2.38/MMBtu in the third quarter, down 18 percent from the third quarter one year ago, only two of the companies in the sample—Cabot Oil & Gas and Gulfport Energy—reported positive cash flow during the quarter. The other five—Antero, Chesapeake Energy, EQT, Range Resources, and Southwestern Energy—all experienced negative cash flows, with Chesapeake and EQT leading the plunge, posting negative cash flows of $264 million and $173 million, respectively.

In the Permian Basin, many producers are simply burning the gas rather than selling it

“Analysts expect natural gas prices to remain depressed for the foreseeable future,” said IEEFA analyst and report co-author Clark Williams-Derry. “Much of this glut comes from the Permian Basin where it has become so uneconomic that many producers are simply burning the gas rather than selling it,” said Williams-Derry noting that Permian flaring hit an all-time high in the third quarter.

Earlier this year, Permian gas prices briefly turned negative, as some oil producers actually paid to have their gas transported out of the basin. But since both gas and oil come from the same Permian wells, oil companies continue to overproduce gas, further saturating the market.

Negative cash flows among fracking-focused companies are just one sign of challenges facing the industry. Layoffs, reductions in permits, wells, and rig counts also signal a slowdown, according to the briefing note.

“The business case for fracking remains unproven,” said IEEFA’s director of finance and report co-author Tom Sanzillo. “Prudent investors should view the entire sector as a speculative venture with a poor track record and shaky prospects.”