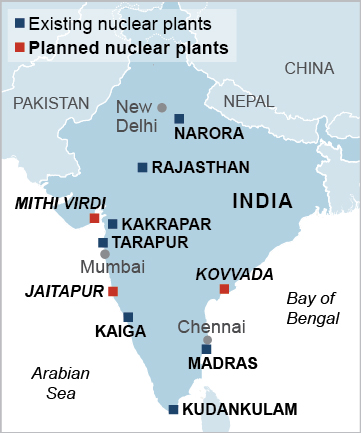 Publication of the report, “Bad Choice: The Risks, Costs and Viability of Proposed U.S. Nuclear Reactors in India coincides with the international Nuclear Security Summit in Washington on March 31-April 1.

The report, by David Schlissel, IEEFA’s director of resource planning analysis, concludes that the proposed nuclear plants, which are “first-of-kind” designs by Toshiba-Westinghouse and General Electric-Hitachi planned for the Mithi Virdi and Kovvada complexes, are neither economically nor financially viable.

“They would take much longer than expected to build, they would result in higher bills for ratepayers, and, if they are built, they might not work as advertised,” Schlissel said.

The report describes how India would do well to put money instead into its abundant solar energy, which would be less expensive and less risky. “Investing in new solar photovoltaic (PV) capacity would be a much lower-cost, significantly less environmentally harmful and far more sustainable alternative to the Mithi Virdi and Kovvada projects,” Schlissel said.

Among the report’s findings:

“All of these can be expected to lead to substantial, and perhaps indefinite, delays and significant increases in capital costs, possibly even far beyond those we have assumed in our analyses,” Schlissel said.