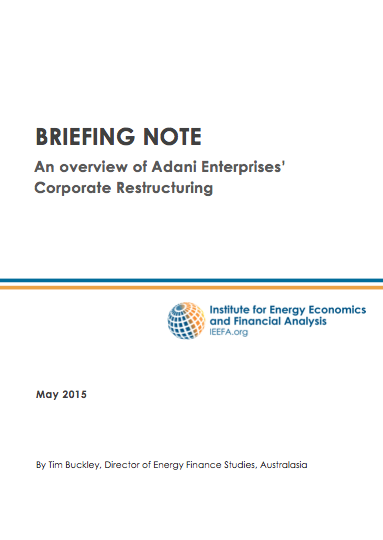 “Overall, the Adani Enterprises restructure increases free float, transparency and simplicity,” said the report’s author, Tim Buckley, IEEFA’s Sydney-based director of energy finance studies, Australasia. “This is a positive in terms of enhancing the equity market value, and has understandably been reflected in the significant outperformance evident relative to the Indian equity market in the first three months of 2015.”

Buckley emphasized the restructuring’s likely impact on the Carmichael project, which he noted had already effectively become a stranded asset by structural changes in both the Indian electricity market and the global seaborne thermal coal sector. The project originally was pitched as a major initiative to export Australian coal to India. The report underscores the financial challenges of the project, noting that Adani Enterprises lacked funding of A$3.6 billion (US$2.8 billion) for the first stage of construction. That figure included financing for the coal mine itself, equipment and a 150-megawatt power station. Additionally, the company sought A$3.5bn (US$2.7bn) in financing for a rail line and locomotives.

“With Adani Enterprise’s market capitalization reduced from US$11.8 billion to US$2.5 billion, attracting finance for the Australian mine proposal looks remote,” Buckley said. “With Adani Enterprises also focusing on two major new solar proposals costing US$9 billion, Carmichael will likely be collateral damage.”

Buckley noted that Indian Energy Minister Piyush Goyal has set ambitious targets for transforming India’s electricity sector over the next few years, including adding 175 gigawatts of renewable-energy installation by 2022, US$50 billion in grid modernization and expansion of the electricity grid, and a potential tripling of India’s domestic coal production.

“As momentum builds, the Indian electricity market will rapidly shift towards a significantly higher reliance on renewable energy and energy efficiency,” he said. “This is predicated on the fact that once built, renewable energy plants and energy efficiency initiatives have an almost zero marginal cost of production, hence immediately work to undermine coal-fired power plants that have a high marginal cost of production.”

“India’s energy sector is rapidly transforming and Adani’s restructure is enabling the company to change with it,” Buckley said. “Gautam Adani has his finger on the pulse and is aligning his company to benefit from the opportunities created by a long-term economic growth transition strategy for India underpinned by lower carbon, less polluting intensive development.”

Mr. Buckley is available for interview: