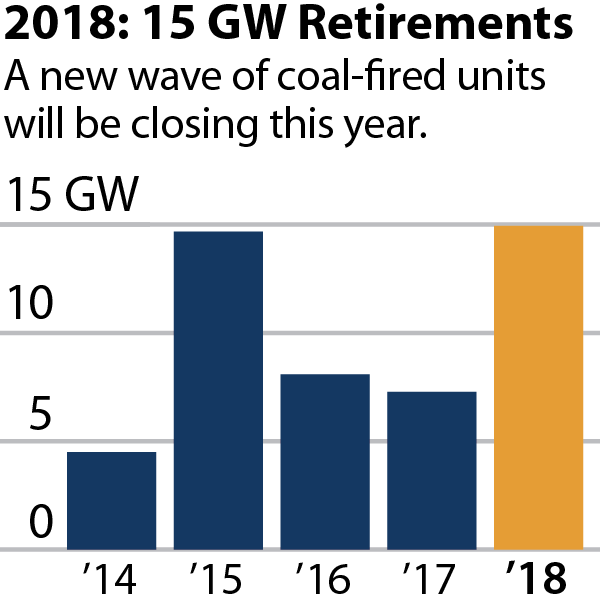 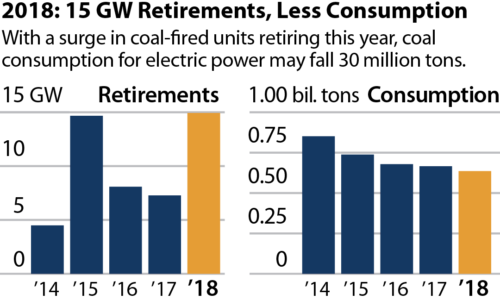 Feb 1, 2018 (IEEFA) — The U.S. coal industry continued to shrink in 2017, and its trend toward long-term structural decline is all but sure to persist, concludes a study published today by the Institute for Energy Economics and Financial Analysis.

The report—“U.S. Coal: More Market Erosion Is on the Way”—details how competition from cheap natural gas, the growing uptake of solar- and wind-powered generation, and little growth in electricity demand have combined to shrink the market for coal.

“In electricity generation—the key market for coal—the industry is increasingly uncompetitive and is losing market share,” said David Schlissel, lead author on the report and IEEFA’s director of resource planning analysis. “Further declines in coal’s energy generation market share can be expected through 2018 and beyond.”

In 2018, a likely doubling over 2017 in the amount of coal-fired capacity to be retired.

The report notes that coal consumption in 2017 stayed at record lows, that retirements of coal-fired plants proceeded apace, that wind generation in particular contributed to record renewable-energy gains, and that low coal prices continued to hobble the industry.

Notably, the IEEFA report predicts that the total amount of coal-fired capacity likely to be retired this year over 2017 will double, to 15,000 megawatts from about 7,300 megawatts. In a fresh wrinkle in a long-established trend, many retirements will be of plants with more than 1,000 MW of capacity.

“IEEFA sees coal-fired generation continuing to drop in 2018, both in absolute terms and in market share,” Schlissel said. 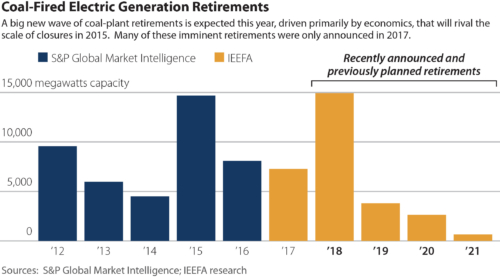 “Coal producers continued to lose customers,” said Tom Sanzillo, IEEFA’s director of finance and a co-author on the report with Schlissel and Seth Feaster, an IEEFA energy data analyst. 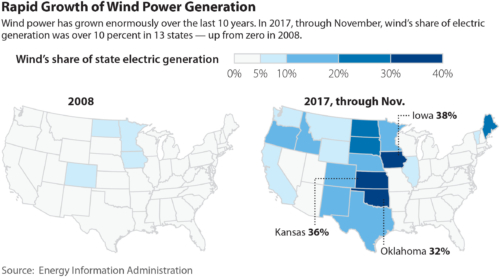 “IEEFA sees 2018 as a year of further decline for coal-fired electricity generation and the coal industry generally,” Sanzillo said. “Coal prices and coal company margins will continue to be under pressure. Even if promised regulatory relief at the federal level is achieved, market forces will continue to prevent a sustained coal recovery.”

Sanzillo said recent declines in the role of coal in the U.S. electricity-generation mix are in line with a trend that has been years in the making. In 2017, coal accounted for 30 percent of electricity production in the U.S., down from 45 percent in 2009.

About IEEFA: The  Institute for Energy Economics and Financial Analysis (IEEFA) conducts research and analyses on financial and economic issues related to energy and the environment. The Institute’s mission is to accelerate the transition to a diverse, sustainable and profitable energy economy.