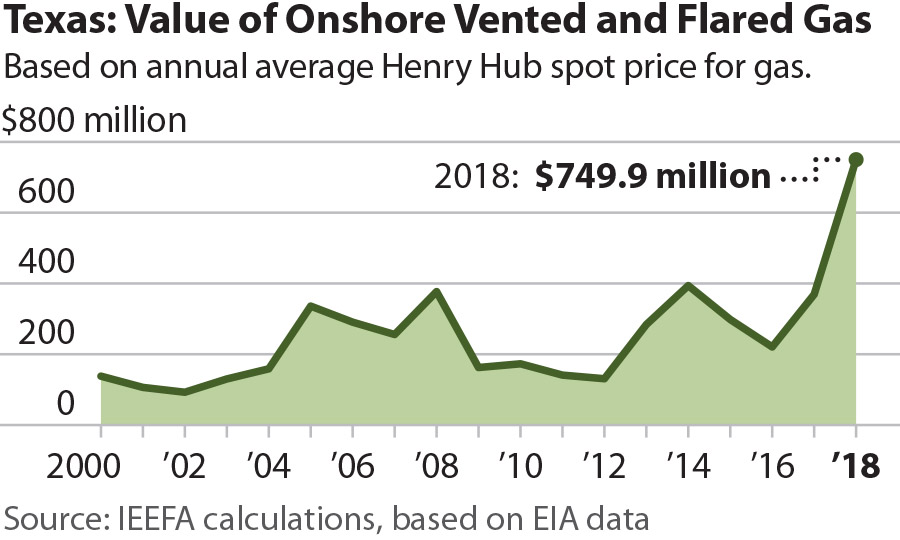 June 11, 2020 (IEEFA U.S.) — Texas oil producers burned a record $749.9 million by flaring or venting unneeded natural gas into the air, according to a report released today by the Institute for Energy Economics and Financial Analysis (IEEFA). 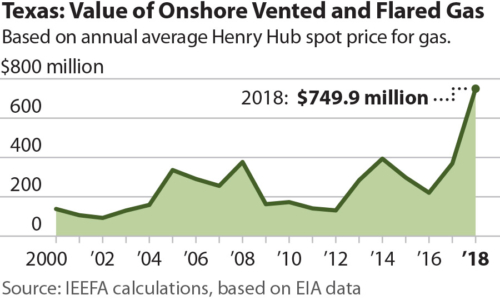 The Texas Railroad Commission, the chief industry regulator in the state, passed up the opportunity to curb flaring last month when it rejected a proposal to cut oil production by 20 percent. The 2-1 vote against taking action occurred even as oil and gas prices plunged because of oversupply conditions exacerbated by the coronavirus pandemic and a price war with Saudi Arabia and Russia.

“The Railroad Commission failed to adopt production cuts and closed its eyes to the declining financial conditions of the oil and gas sector and its impact on the Texas economy,” said Tom Sanzillo, IEEFA Director of Finance and a co-author of the report. “Their decision was driven by looking in the rear-view mirror, and they are heading for a crash. The hard issues will haunt them going forward, but the commission is unwilling and unprepared to address them.”

Reducing or eliminating flaring would help address oversupply issues that have plagued the oil and gas industry for years. Even so, the report found that the oil and gas regulator failed to fulfill its responsibilities on multiple fronts:

Flaring is only one of multiple problems troubling the industry. These troubles include low demand for existing reserves, high debt levels, declining credit ratings, bankruptcies, poor stock performances, market competition and the instability of state-owned enterprises. Removing waste from oil and gas production is not only a legal requirement; it’s also a profit-making proposal.

Since the commission’s vote, oil prices have rebounded above $30 per barrel, but IEEFA notes that even if oil were selling at twice that amount, it is doubtful that this could rescue the industry from its current predicament. In recent years, oil prices rebounded from historic lows and stayed near $60 barrel, but even then, the oil and gas sector  was a bad investment, placing last in the Standard and Poor’s 500 index. Oil and gas companies made up seven of the S&P 500’s top 10 performers in the 1980s; today, none are included. The industry’s stocks amounted to 28 percent of the S&P portfolio in 1980; now, they only account for 3 percent.

The commission’s decision to allow oil companies to self-regulate as a means of reducing production and reaching profitability, supported by the American Petroleum Institute, isn’t likely to help prices. Low prices will mean less revenue and continued financial distress. . The chief executive of Pioneer Natural Resources, which supported a resolution to curb production, warned that “the current market collapse is anything but ordinary, and a prolonged period of oil price depression threatens U.S. national interests.”

“Oil and gas industry leaders have put their heads in the sand and said the energy transition taking place will somehow go away. It won’t.  Ever-increasing amounts of oil and gas production no longer mean more revenue and profits for producers and royalty owners,” said Sanzillo. “The need for the RRC to take action to stop waste in oil and gas production will temporarily prop up a weak industry, and more importantly, begin the discussion on the declining significance of the oil and gas industry to Texas and the global economy.”