A dozen European countries, including France, Germany, Italy and the U.K., are either considering or already have similar capacity markets, mechanisms by which power plant owners are paid regardless of whether their plants generate power. Spain was one of the first countries to introduce such payments, in 1997.

The IEEFA brief—“Spain’s Capacity Markets: Energy Security or Subsidy?”—notes that the main argument for such markets is that they are needed to preserve security of electricity supply when wind and solar are not available. IEEFA’s research suggests there are far more cost-effective ways to ensure energy security, however, and that capacity markets typically burden taxpayers and ratepayers unnecessarily and hurt economic growth (such payments average about €1 billion annually in Spain).

Wynn noted that Spain’s capacity scheme may over-pay large, energy-intensive industries for agreeing to reduce demand at times of system stress. IEEFA notes also that such demand-side response payments were three to eight times greater than corresponding payments in Britain.

“And Spain can go further,” Wynn said. “By cutting over-capacity, allowing the retirement of uneconomic power plants, reducing or eliminating price caps in its power market and reforming its balancing market, Spain can move toward eliminating a capacity mechanism altogether, and save billions of euros which it can spend instead on updating its grid infrastructure.” 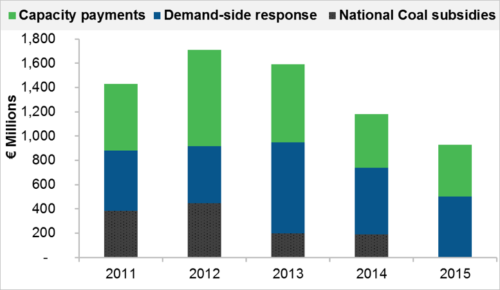 “While the original motive for capacity payments in Spain was to meet rapidly rising energy demand in the late 1990s, power demand peaked in 2007,” Wynn said. “Yet the capacity payments remain. Regulators estimate that about 80 percent of gas-fired power generators in Spain today would be unable to cover their fixed costs without capacity payments, and that most of its coal-fired electricity industry is similarly dependent on capacity payments and other subsidies.”

The IEEFA brief notes that the shift to a market that is based entirely on trade in energy, rather than one distorted by capacity payments, could be accelerated by more severely punishing imbalances and better rewarding fast-response generation in real-time balancing markets. Compared with capacity markets, such an approach would better address actual system scarcity, eliminate paying needlessly for swathes of unused generation, and reduce the influence of powerful special interests.