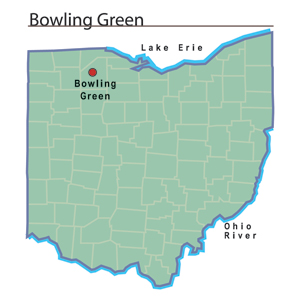 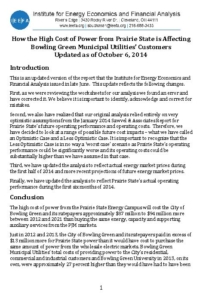 Electricity from Prairie State Energy will cost the city of Bowling Green, Ohio, roughly $87 million to $94 million more from 2012 to 2021 than it would buying it on the open market.

The comparison is outlined in a report published today by David A. Schlissel, director of resource planning at IEEFA, “How the High Cost of Power from Prairie State is Affecting Bowling Green Municipal Utilities’ Customer.”

Schlissel estimates that from June 2012 to June 2013 Bowling Green ratepayers paid more than $13 million more through their arrangement with Prairie State than the same electricity would have cost from other markets. Bowling Green’s costs in 2013 alone were about 27 percent higher than they would have been had the city purchased power from the wholesale electric markets rather than Prairie State.

His report shows how individual households are paying collective millions of dollars more than they should be and how all of the city’s commercial and industrial ratepayers, including its top two economic drivers—Bowling Green State University and Southeastern Container Inc.—are saddled by excessive electricity rates.

The report updates numbers from an IEEFA report published in late June, but comes to similar conclusions.