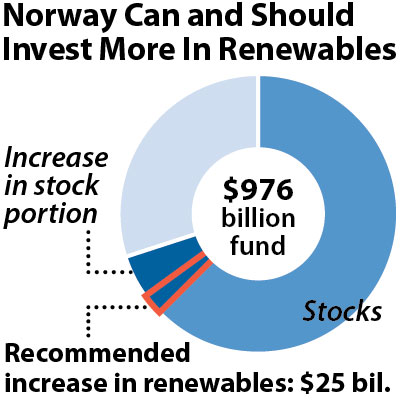 The report — “How Renewable Energy Holdings Can Contribute to the Growth of Norway’s Pension Fund in a Time of Oil Industry Uncertainty” — notes that because of weakness in its core oil holdings, which are being hurt by a worldwide downturn across the oil sector, the fund will struggle to achieve the same level of returns it has reaped historically.

“The global energy sector’s transition away from fossil fuels is putting financial stress on the fund,” said Tom Sanzillo, lead author of the report and IEEFA’s director of finance. “But it presents investment opportunities as well.”

The report recommends the fund as soon as possible create an internally managed portfolio of renewable energy investments that provides access to the growing sector.

“Such an approach would allow the Fund to prudently manage risk while simultaneously reaping attractive returns,” Sanzillo said. “The Fund’s oil investments today place Norway budget-wise on a trajectory for long-term structural decline, and must be addressed quickly. “

Sanzillo noted that GPFG managers have already opted to increase the fund’s stock holdings to 70 percent of its 7.5 trillion NOK (US$976 billion) from 62.5 percent. 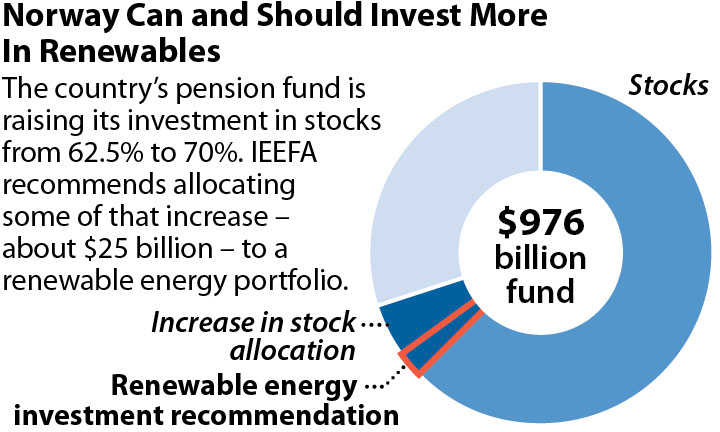 “We recommend that the Fund allocate
approximately 35% of this increase in equity capital—190 billion NOK (US$25 billion)—to a renewable energy portfolio,” Sanzillo wrote. “A renewables portfolio could include a combination of increases in targeted investments to utilities and listed infrastructure companies with growing renewable portfolios; investment in indexes with exposure to renewables; and a set-aside for direct investments in listed and unlisted infrastructure projects.”

“Each of these investment opportunities have track records with returns that meet or exceed GPFG’s historical performance.”

Sanzillo notes that: “Norway’s Ministry of Finance has been reluctant to embrace renewable energy investments, but Norway does so at its own financial peril.”

Additional details on what the report notes are “several responsible ways to proceed.”

“GPFG can devise a sub-classification of equities within its overall equity portfolio that allocates capital to publicly traded utilities and listed infrastructure funds with growing renewable energy portfolios. Investments in traditional publicly traded companies that are in the renewable space mitigate many of the risk considerations raised by the Ministry of Finance.”

“GPFG can conduct an analysis of renewable energy indexes, environmental-mandate indexes, fossil-free indexes, and broader socially responsible indexes—and then select among them. Investment in indexes all but eliminates direct political and regulatory risks identified by the Ministry of Finance.”

“A smaller allocation to the unlisted energy infrastructure space, combined with direct investments in listed infrastructure funds with an emphasis on renewable would allow the fund to stay ahead of eroding revenues from oil sales and the resulting decline in the fund’s investment returns. Investor risks across the renewable sector, particularly in unlisted infrastructure—a trillion dollar market— are typically well-managed by competent professionals.

“Several prominent investment houses have developed pure-play unlisted renewable funds, reducing the risk profile of these holdings by excluding investments in more controversial infrastructure projects such as pipelines. GPFG can take advantage of similar opportunities now. Long-term stable purchase power agreements that use renewable energy for electricity generation pose less risk than some of the other longer-term politically sensitive projects, such as pipelines, that are more normally associated with infrastructure development.”

The report notes also that numerous large institutional investors have made similar such moves already.

“Since January 2017, two major investment houses—BlackRock and JPMorgan Chase—have announced the formation of new funds in the renewable sector. BlackRock closed its most recent renewable fund of US$1.48 billion, bringing its total investment across the renewable asset class globally to $4.8 billion. Today, 22 European institutional funds are invested in BlackRock renewable initiatives.”

“Returns are attractive,” Sanzillo said. “Demand for renewables is increasing. There are many avenues by which GPFG can take part while simultaneously and responsibly managing risk.”

Sanzillo notes finally that Norway’s Ministry of Finance has been reluctant to embrace renewable energy investments, but that if the government maintains this position, it does so at its own financial peril.

Full report here: “How Renewable Energy Holdings Can Contribute to the Growth of Norway’s Pension Fund in a Time of Oil Industry Uncertainty”