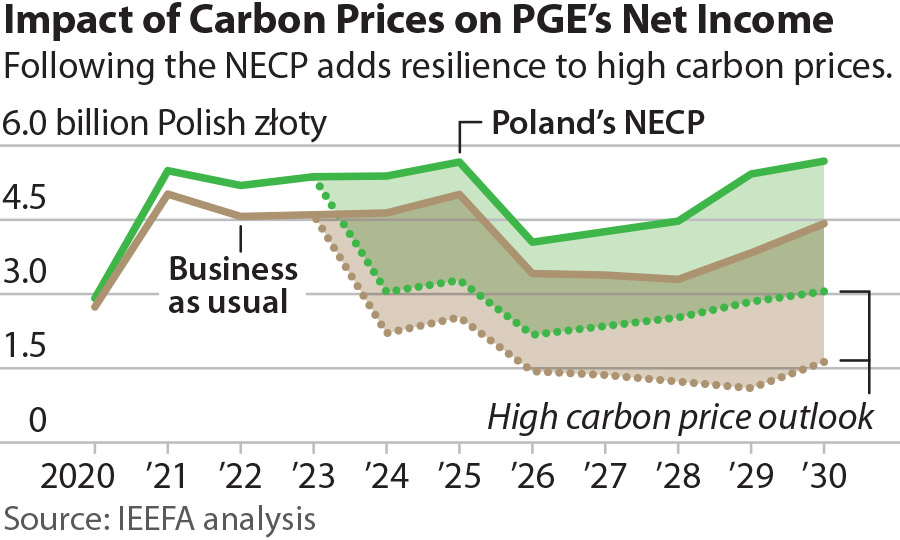 The report findings show why Europe’s biggest coal plant, Bełchatów, should close around 2035, and why PGE must invest more urgently in low-carbon alternatives, to avoid a collapse in cash generation and profitability in the 2020s.

PGE is at present embarked on a high-carbon spending spree, investing some PLN 28 billion ($7.2 billion, €7 billion) from 2015-2018 to build three new coal power plant units, acquire the Polish coal assets of French energy company EDF, and upgrade its existing coal fleet to meet air quality standards. In the first half of last year, coal accounted for 90% of PGE’s electricity generation.

But the profitability of these hard coal and brown coal (lignite) power plants will fall through the 2020s, as a result of rising carbon costs, falling capacity payments and high maintenance expenditures. PGE must invest urgently in low-carbon, low-risk, high-cash generating assets, and especially renewables, to replace lost coal profits in time, finds the IEEFA report, How to Create a Profitable Polish Electricity System.

PGE recently recognised that high carbon prices are here to stay, and responded with ambitious renewables goals, but these are largely deferred towards the end of the decade. Meanwhile, it has no significant plans to decommission ageing coal and lignite power plants.

Coal will be barely profitable, or loss-making, in the second half of the 2020s

As a result, PGE now lags the Polish government’s own 2030 energy goals, published in its recent National Energy and Climate Plan (NECP) at the end of last year. The NECP is a minimum benchmark for PGE, not least because the government is the company’s biggest shareholder.

And PGE can go further than the NECP goals, according to the IEEFA report.

“Our findings indicate that hard coal on average will be barely profitable, or loss-making, in the second half of the 2020s,” said Gerard Wynn, IEEFA energy analyst and co-author of the report.

“Lignite generation on average will at best provide only a small fraction of PGE’s total profits after 2025, and will also be loss-making under a higher carbon price outlook.”

The report recommended that the Polish government explicitly scrap plans for a new lignite mine at Złoczew, which would extend power generation at PGE’s Bełchatów power plant into the 2050s. Without the new mine, Europe’s biggest coal plant, Bełchatów, would close around 2035, an end date compatible with the findings of declining profitability in the IEEFA report.

“PGE’s dramatic increase in coal investment, under its 2016-2020 strategy, was poorly timed and ill-conceived, increasing the company’s exposure to carbon and regulatory risks, notwithstanding some smart moves such as investing in heat,” said Paolo Coghe, energy analyst and co-author.

“Under its new post-2020 strategy, which we expect soon, the company must position itself fully behind reducing those risks, to grow the profitability of its generation through this decade, by investing more urgently in low-carbon, low-risk generation, and announcing a timeline for coal and lignite power plant closures.”

The IEEFA report analysed PGE’s profitability according to three broad scenarios through 2030: “Business as Usual (BAU),” “NECP” and “Halving Coal.” The BAU scenario reflected PGE’s present published plans. The NECP scenario applied to PGE in 2030 the government’s recent national energy mix targets. The Halving Coal scenario went further, with a goal approximately to halve coal and lignite generation by 2030, a goal that the government presently delays until 2040, under its draft Poland Energy Plan for 2040 (“PEP40”).

Under all three scenarios, PGE’s overall growth in profitability through the next decade is almost entirely driven by investment in renewables. As a result, lower renewables investment under the BAU scenario sees total PGE net income fall, even under a low-carbon price outlook. Under a higher carbon price outlook, total cash generation and net income collapse, under the BAU scenario. Higher renewables investment in the NECP and Halving Coal scenarios benefit overall profitability.

The chart below shows how PGE’s net income is more resilient to higher carbon prices (dotted versus solid lines), under the NECP scenario compared with the BAU scenario. The report concludes that PGE has to go beyond its present plans, at least to the level of Poland’s NECP, to safeguard cash flows. 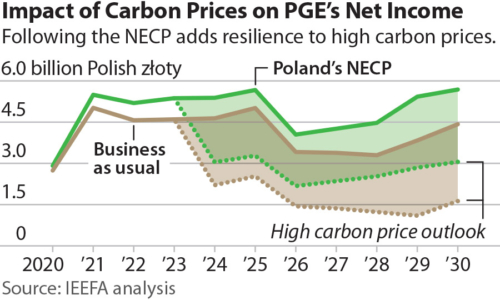 Investments of PLN 1.6 to PLN 3.1 billion would be required in coal, lignite and CHP plants, to meet tougher air quality standards, in the second half of the 2020s, the report estimates. These investments appear especially vulnerable to being “stranded,” given the precarious profitability of many of these power plants.

Gerard Wynn ([email protected]) is an IEEFA energy finance consultant based in London.

Paolo Coghe is an energy economist based in Paris.

Full report: How to Create a Profitable Polish Electricity System