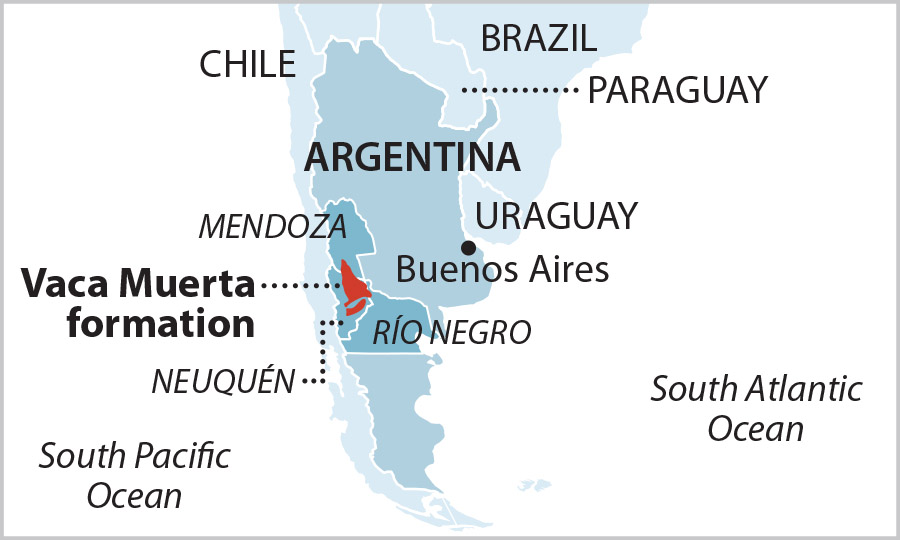 June 24, 2020 (IEEFA Argentina) — Once seen as a silver bullet to solve the country’s economic and energy problems, development of the vast Argentine oil and gas shale reserves known as Vaca Muerta (“Dead Cow”) in Patagonia has sputtered to a near-halt, according to a new report by the Institute for Energy Economics and Financial Analysis (IEEFA).

Development had relied upon joint ventures between Argentina and international corporations, as well as generous government subsidies. The Latin American nation’s deteriorating financial condition has forced the government to curb subsidies, and foreign companies have scaled their investment pledges back in the wake of the coronavirus pandemic and the sharp decline in oil prices. Even before the twin cataclysms rocked the energy industry, however, Vaca Muerta was far from fulfilling its promises, said Kathy Hipple, an IEEFA analyst and lead author of the report.

“The failure to develop Vaca Muerta offers President Alberto Fernandez, who took office in December, a unique opportunity to change course,” Hipple said. “His administration can learn lessons from the failure of fracking in the U.S. Permian Basin, and avoid the boom-bust cycle that increasingly seems more bust than boom.”

The majority state-owned YPF, Chevron, and Vista Oil and Gas accounted for 39 percent of investments in unconventional production in the Patagonian field. Chevron, which was the first foreign company to invest heavily in Vaca Muerta in 2013, said in March that it would take an addition $2 billion cut to its 2020 capex budget, and that cuts would include Vaca Muerta. Vista has slashed its capex spending by $205 million, falling to $95 million despite having received $300 million in financing guarantees from the Overseas Private Investment Corporation. And YPF, the biggest producer and refiner of oil and gas in Argentina, said it would shave $750 million from its 2019 capex spending of $3.5 billion.

Other foreign companies haven’t announced specific plans to cut investments in the region but have indicated they’re reducing capex globally. Shell, which purchased a Schlumberger stake in a Vaca Muerta block in January, said it would cut global capex by more than $5 billion. Total, which produced more than a quarter of the country’s gas in 2019, has made no announcements about its investments in Vaca Muerta. ExxonMobil said in mid-2019 that it would expand its investments in Vaca Muerta but has stopped almost all of its new expansions there. Pan American Energy, BP’s Argentine subsidiary, had planned capex of $400 million for Vaca Muerta, but its parent company has cut capex by $3 billion, with $1 billion in reductions coming from unconventional production.

“These findings and recent production numbers show that the 2018 Argentine Energy Plan formulated under Macri has failed to materialize, and the new president must rewrite Argentina’s energy future,” said Tom Sanzilllo, co-author of the report. “The country’s new administration has an opening to consider alternative approaches to meet the country’s energy needs and promote economic recovery.”

Tom Sanzillo ([email protected]) is director of finance at IEEFA.