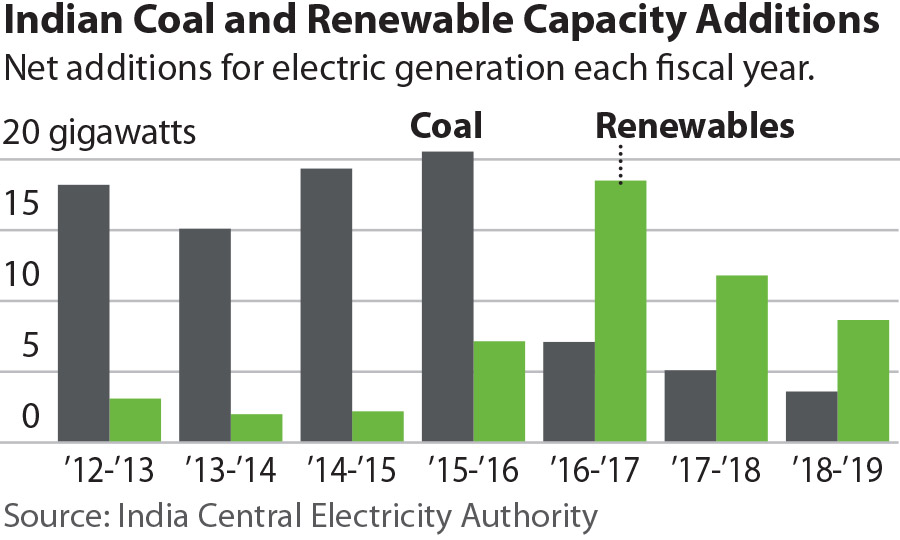 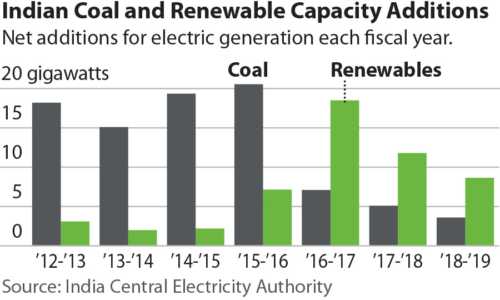 September 4, 2019 (IEEFA) ‒ India’s coal-fired energy sector is facing increasing pressure due to generator over-capacity, water shortages and the rise of competition from low-cost renewables and hydro power, according to a report released today by the Institute for Energy Economics and Financial Analysis (IEEFA) and the Applied Economics Clinic (AEC).

The report, Risks Growing for India’s Coal Sector, provides an overview of the ongoing challenges facing India’s coal-fired generators due to changes in the energy sector, fluctuations in water supply and stranded-asset as well as other risks.

“The energy landscape has changed dramatically in recent years and there are increasing stressors, particularly on the thermal coal sector, that require urgent attention, water being one of the most prominent,” said David Schlissel, co-author and IEEFA’s director of resource planning analysis.

The report details three major challenges that are expected to only intensify in the years ahead, namely:

“India’s overbuilt coal power capacity has left two related problems. First, utilization rates have fallen, impairing the economic competitiveness of coal plants because they must spread their costs over a diminishing number of kilowatt-hours,” said Bryndis Woods, researcher at the Applied Economics Clinic (AEC) and co-author of the report. “Second, over-capacity has burdened the system as a whole since the plants’ capital costs still need covering even if their electric output is not needed.”

Ongoing water shortage problems in India forced 61 plant shutdowns from 2013-2017, resulting in roughly 17,000 gigawatt-hours of lost generation (and revenue). Water-related problems are projected to worsen as the impacts of climate change continue to exacerbate the duration and severity of both flooding and drought.

About 41GW of India’s installed thermal capacity is located in drought-affected areas, with about 37GW located in “extreme drought” areas, according to the report.

ANOTHER MAIN FACTOR IN THE ENERGY SHIFT IS THE WAVE OF NEW RENEWABLE CAPACITY PLANNED FOR INDIA, 275GW by 2027 and as much as 500GW by 2030. Prices for onshore and offshore wind and solar are expected to continue declining while prices for coal-fired generation are likely to rise. All solar and wind auction prices in India since June 2018 have come in below 3.29 Rs/kWh, less than the average FY 2018-19 price of coal-fired electricity (3.46 Rs/kWh, equal to US$0.045/kWh) from NTPC—the state-run utility that operates 53GW of coal-fired capacity.

“The economics already favor renewables, and we expect the cost disparity between renewables and coal to widen as time goes on,” said Schlissel.

“With a growing population and economy, India needs to pay greater attention to its water resource problems in order to guarantee long-term supply availability for all,” said Woods.

Bryndis Woods ([email protected]) is a researcher at the Applied Economics Clinic (AEC).

Vibhuti Garg ([email protected]) is an IEEFA energy economist based in India.

The Institute for Energy Economics and Financial Analysis (IEEFA) conducts global research and analyses on financial and economic issues related to energy and the environment. The Institute’s mission is to accelerate the transition to a diverse, sustainable and profitable energy economy. www.ieefa.org

About the Applied Economics Clinic (AEC)

The AEC is an independent, 501(c)(3) non-profit consulting group that provides expert testimony, analysis, modelling, policy briefs, and reports for public interest groups on the topics of energy, environment, consumer protection, and equity, while providing on-the-job training to a new generation of technical experts. www.aeclinic.org

Bryndis Woods is a researcher at the Applied Economics Clinic (AEC).