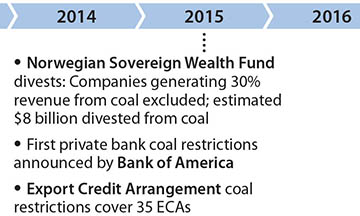 The report, “Over 100 Global Financial Institutions Are Exiting Coal, With More to Come,” finds global capital is fleeing the coal sector at an electrifying rate.

Since 2013, coal exit announcements have occurred at a rate of over one per month from globally significant banks and insurers holding more than US$10bn worth of assets under management. 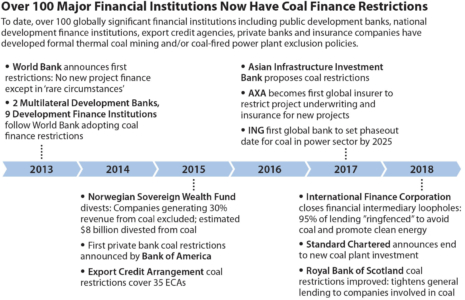 The report found that since the start of 2018, there have been 34 new or significantly improved announcements from global financial institutions restricting coal.

On average, there is one new announcement every two weeks.

The World Bank announced the first-ever restrictions in 2013, with the 100th announcement in December 2018 coming from the European Bank of Reconstruction and Development (EBRD) removing three country exceptions to its coal finance ban.

A further five policies have been announced since the beginning of 2019 with moves coming from Nedbank of South Africa, Barclays Bank UK, Export Development Canada, and Varma of Finland. The latest move announced just last week was from Austria’s Vienna Insurance Group saying it will no longer insure new coal plants and mines.

“For environmental, reputational and financial reasons, thermal coal is a toxic asset for global investors increasingly announcing new and improved policies responding to climate change,” said Buckley. ” The strong leadership of a few globally significant institutions five years ago is increasingly turning into capital flight by the many, with one new announcement every two weeks in recent years.

“The pattern of tightening existing policies combined with new lending restrictions is creating a domino effect within the global financial industry while resulting in a progressive strangulation of the thermal coal industry. Stranded assets are a clear financial risk for any institutions left funding the coal sector.

“With investors understandably focused on cheaper, sustainable, domestic renewables – which are clearly becoming the backbone technology of choice for energy systems going forward, an emerging theme is coal companies’ inability to access capital markets for expansions, mergers or acquisitions.

“The pace of change is electrifying.”

The 100+ financial institutions restricting coal lending includes 40% of the top 40 global banks and as of last week, at least 20 globally significant insurers with more than $6 trillion of investments – 20% of the industry’s global assets – who are excluding coal from their portfolios.

Financial institutions’ coal restrictions are coupled with the withdrawal of other essential support. Eight insurers and reinsurers, including industry giants like AXA, Allianz, Swiss Re and Munich Re, have ended or restricted their insurance for coal projects, making it increasingly challenging for companies to find cover.

Since the beginning of 2018 34 coal restriction policies have been announced, with 25 being new and another nine building on earlier coal-related commitments. Notably, these restrictions are beginning to come from Asian financial institutions led by Dai-ichi Life of Japan and Sumitomo Mitsui Trust Bank, which are rapidly aligning with their European and U.S. counterparts.

Meanwhile, some institutions in Europe and the U.S. have some catching up to do. Whilst New York City’s pension funds have pledged to divest from fossil fuels, the New York State Common Retirement Fund, the third largest pension fund in the U.S., has so far failed to act.

“Our report shows that coal finance restrictions are increasingly emerging across the globe, from New York to South Africa, Brazil to Japan,” said Buckley.

“While initial measures vary in effectiveness, we found that the trend is for financial institutions to ratchet up the strength of policies once they are in place. With environmental and reputational concerns certainly driving factors for capital fleeing coal, investors are also increasingly aware that coal industry forecasts are increasingly dour.”

The unexpected US$18bn collapse into bankruptcy of Peabody Energy in 2016 and more recently the US$150bn collapse in value of General Electric shows the magnitude of capital destruction for investors who continue to ignore the energy system transformation. The ongoing financial distress at Wiggins Island Coal Export Terminal (WICET) in Queensland for most of this decade has bankrupted four Australian coal mining firms and cost banks and investors billions.

“With the energy transition to cheaper technologies gathering pace, the likelihood of investors having to wear billions of dollars in additional stranded assets is impossible to ignore,” said Buckley.

“The smart money is jumping ship. The only question now is, who’s next?”

Read the report: Over 100 Global Financial Institutions Are Exiting Coal, With More to Come: Every Two Weeks a Bank, Insurer or Lender Announces New Restrictions on Coal