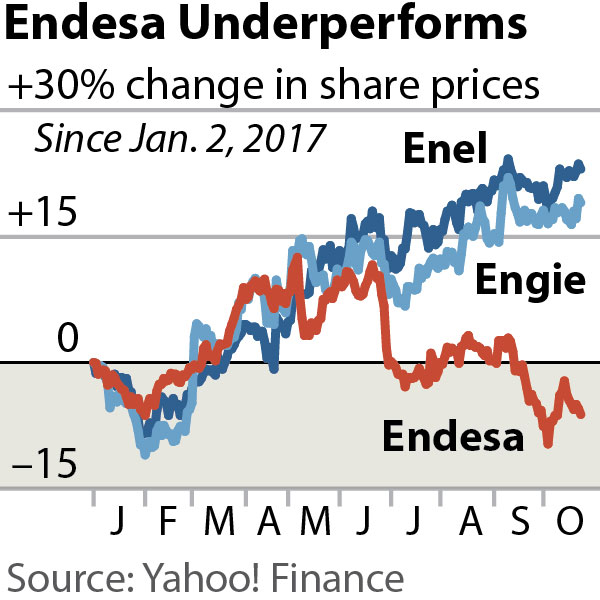 The report—“How European Utilities Can Capitalize on New Air Pollution Limits to Drive Decarbonization: The Case of Endesa”—concludes that Endesa would be better served canceling the upgrades, closing the plants, and turning to its underutilized natural gas capacity and increasingly economic renewable generation.

“The Enel Group would do well to turn the page on its coal legacy and close the three Endesa power plants in question,” said Gerard Wynn, an IEEFA energy finance consultant and a co-author of the report. “The three plants, Litoral, AS Pontes and Alcudia, aren’t needed in a country with severe generating over-capacity and where existing, cleaner-burning gas-fired electricity generation is barely running.” 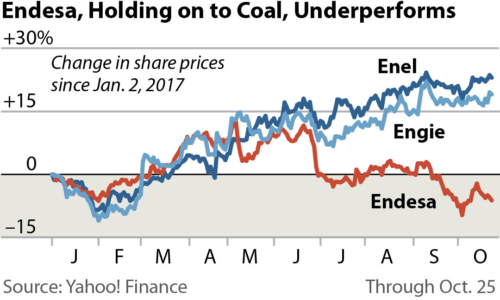 “New tighter EU air pollution limits, which take effect in 2021, present all European utilities with a strategic opportunity to run a slide-rule over their coal power assets, and where these are non-compliant, decide to move forward more aggressively with coal retirement plans,” Wynn said.

Massimiliano Patierno of the Madrid-based International Institute for Law and the Environment said the report suggests an important policy moment for Spain.

“Coal has no future within the European Union beyond 2030,” Patierno said. “The Spanish government should follow the path of countries such as Italy and the U.K. that have already committed to phase out coal.”

Sebastien Godinot, an economist at the European Policy Office of the World Wildlife Fund, said the report serves also as an important warning to the companies involved and their shareholders: “The IEEFA analysis usefully shows that costly retrofits of old coal plants to comply with forthcoming air pollution standards may be economically dubious. Shareholders of Enel and Endesa should discuss such risky investment plans with utilities before decisions are made, and urge them to shift investments towards renewables instead.”

‘Coal has no future within the European Union beyond 2030.’

Enel is an Italian energy company with holdings across Europe.

The report details several cases for why the plants should be shuttered rather than upgraded:

The paper includes an overview of Engie, another major European utility with what Wynn called “one foot in the green renewable energy world of the future and the other stuck in the brown coal era of the past.”

“The introduction (and potential tightening) of environmental restrictions has made generation-expansion decisions much more complex and risky than in the past. Integrated, long-term strategies to manage the risks stemming from tighter regulation and policy on air pollution and emissions should aim to decrease exposure to such risks, not increase it, ” said Paolo Coghe, president of consultancy Acousmatics and a co-author of the report. “The Endesa investment is likely to end up stranded if the European Union, as expected, proceeds with commitments related to the 2015 Paris Agreement on climate change. The agreement effectively mandates the phaseout of coal-fired generating on the continent by 2030 or soon thereafter.”

Full report: “How European Utilities Can Capitalize on New Air Pollution Limits to Drive Decarbonization: The Case of Endesa”
____________________

About IEEFA: The Institute for Energy Economics and Financial Analysis (IEEFA) conducts research and analyses on financial and economic issues related to energy and the environment.