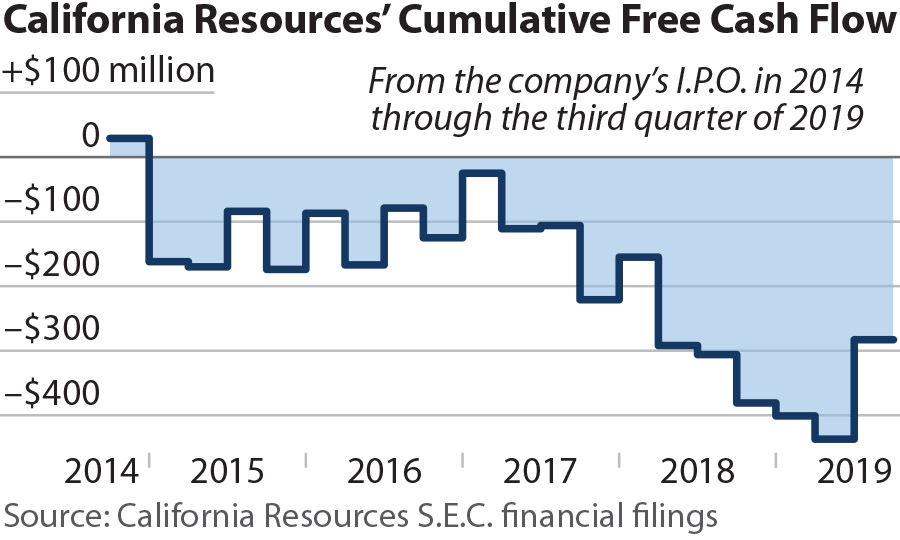 February 6, 2020 (IEEFA U.S.) ‒ California Resources Corporation (CRC), a company spun off from U.S. oil giant Occidental Petroleum six years ago, faces an elevated risk of bankruptcy that could pose significant financial risks to the state of California, according to a report released today by the Institute for Energy Economics and Financial Analysis (IEEFA).

According to the report, California Schemin’: California Resources Corporation’s Financial Distress Raises Questions About Cleanup, CRC has racked up $283 million in free cash losses since 2014, and faces an uphill battle in paying down $4.9 debt that comes due by the end of 2022. This financial distress raises questions about whether CRC will ever be able to pay for the cleanup of more than 18,000 oil and gas wells the company owns or controls.

“On the surface CRC looks like your average struggling oil venture. But it raises the question of whether the company was created specifically to offload Occidental’s California cleanup liabilities,” said IEEFA energy financial analyst and report author Clark Williams-Derry. 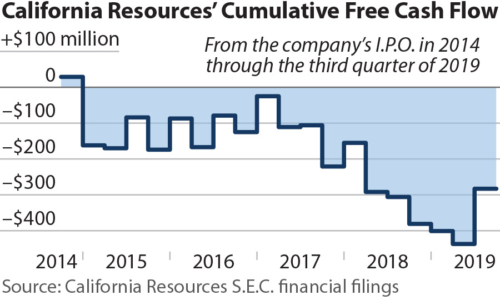 CRC owns more than 6,000 idle oil and gas wells across California, along with more than 11,000 active wells and additional injection wells. Each of these wells eventually must be plugged, retired, and remediated, at a total price tag that could stretch into the billions of dollars.

These costs may be too steep for CRCto bear, given its weak market capitalization, a history of negative free cash flows, and the many regulatory and market headwinds that the company faces.

“Investors have recognized these risks by pummeling CRC’s stock, even as credit agencies have pushed the company’s debt ratings deep into junk-bond territory,” said Williams-Derry.

Last fall, California imposed new safety and environmental reviews for hydraulic fracturing (fracking) permits, as well as a moratorium on steam-injected oil drilling, a technique that boosts production of heavy oil but was linked to a massive oil spill earlier last year. CRC was hit hard by the new regulations with its stock price plummeting 27 percent on November 19, the day the stricter regulations were announced.

“The short and sad history of CRC raises interesting questions about how much Occidental Petroleum knew or could guess about the spinoff’s eventual cleanup obligations,” said Williams-Derry. 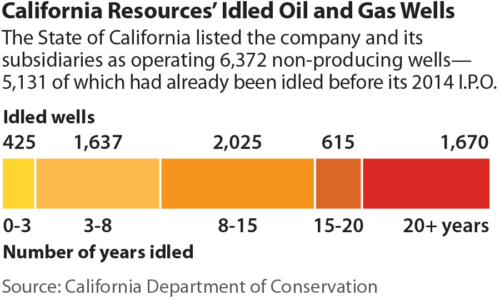 For Occidental, the CRC spinoff initially was a financial success. CRC borrowed money from debt markets to pay Occidental $6 billion in cash up front. At the same time, Occidental shed its long-term California cleanup liabilities from its books, pushing those obligations onto the newly formed company.

To survive as a going concern, CRC will likely seek to refinance its debt once again—potentially boosting interest costs or extending maturity dates, further undermining the company’s ability to generate positive free cash flows, according to the report.

“The costs to plug, abandon and remediate contamination from oil and gas wells can be staggering,” said Williams-Derry. “In the long run, who will be saddled with these cleanup costs?”