February 22, 2019 (IEEFA Arizona) — The Institute for Energy Economics and Financial Analysis (IEEFA) published a report today concluding that a tribal company’s plan to acquire the failing Navajo Generating Station (NGS) and its companion mine would most likely create a money-losing enterprise.

The report—“NTEC’s Plant/Mine Acquisition Plan Puts Navajo Nation at Serious Financial Risk”—concludes that the Navajo Transitional Energy Company (NTEC) is probably overstating the odds of success in its proposal and that it has not made a viable case for backing the plan.

“Barring a more detailed and persuasive business case, IEEFA sees the NTEC proposal as a project that stands little chance of operating NGS and the Kayenta mine profitably or reliably,” said David Schlissel, IEEFA’s director of resource planning analysis and lead author of the report.

“The current owners of NGS, who have decades of experience in operating large coal-fired generators and profitably selling large amounts of electricity into the power markets, have concluded that it will be unprofitable to run NGS after 2019,” Schlissel said. “There is no reason to believe that NTEC can succeed where the current owners have concluded that they cannot.” 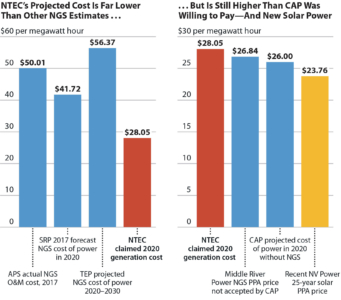 The report recommends that before any deal proceeds, NTEC produce “a comprehensive business plan that meets professional standards and that openly addresses the unlimited and uncertain levels of liabilities that would come with acquisition.”

Navajo Generating Station is slated for retirement in December after its utility-company owners concluded two years ago that the aging plant could no longer compete with gas-fired and renewable forms of generation.

NTEC, at the direction of some tribal leaders, has proposed acquiring NGS and its companion Kayenta Mine, which is owned by Peabody Energy.

The IEEFA report views as problematic several gaps or omissions in the NTEC proposal, including:

Under NTEC’s proposed business model—accepting all of NTEC’s assertions about its ability to reduce plant and mine operating costs—”NGS and the Kayenta Mine, if kept open will produce, at best, minor profits,” the report states. “What is more likely is that the actual costs of operating NGS and the Kayenta Mine after 2019 will be much higher than NTEC acknowledges.”